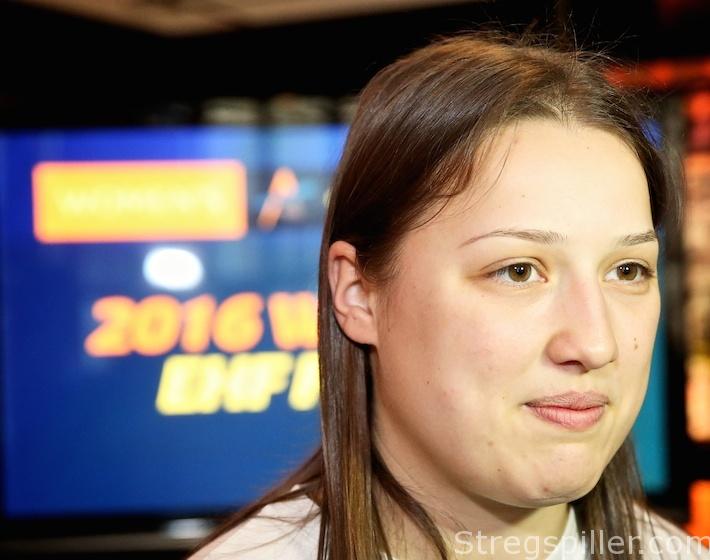 INTERVIEW – Buducnost´s shooting star Djurdjina Jaukovic does not want the label “favorite” pinned on her team, ahead of the women Champions League FINAL4.

A lot of people tend to see Buducnost as the top contender to win the Women´s EHF FINAL4 for the second time in succession – whether Djudjina Jaukovcic likes it or not.  And she definitely does not like it.

“I do not think you can say that we are the favorites.

“This will be a FINAL4 with four teams who can all win the Champions League, and in my opinion, it will be the team that performs at the top, two days in succession – that’s the team that will stand with the trophy in the end,” Jaukovic tells stregspiller.com.

Already at the age of 19, the 185 cm tall left back has turned into a respected defense specialist.  During her first season with Buducnost, she has evolved into a new shooting star -not only in her club – but in Montenegrin handball in general, as she has also shown her importance to the Montenegrin national team in recent months.

Apart from that, she is a tough fighter when playing defense and crucial to Buducnost´s way of playing the game.  This FINAL4 will be her first one after joining Buducnost from WHC Danilovgrad last year and she is obviously excited.

“It is really great to be here and I am really looking forward the playing these matches,” she says.

When asked more specifically, what she thinks will decide this FINAL4, she is not in doubt.

“Defense will play a big part.

“Defense means a lot in modern handball and I am sure that the team with the better defenders will succeed in the end,” she finds.

“The physical resources in general play a big part at an event like this, when you have to play two tough matches in two days.  Playing a season-ending tournament in this format is very hard, but I feel that we are well equipped and very well prepared for the challenge.

“I think our squad is large enough and deep enough to face and solve the task,” says Djurdjina Jaukovic.

Many people, including the author of this article, see the first semi-final on Saturday, between Buducnost vs Gyor as the “real final” and logically he expects the winner of that meeting to also win the Champions League.

Experts and others alike, also see Gyor as the most formidable opponent, Buducnost could get as a first hurdle in their attempt to regain the Champions League title.  Djurdjina Jaukovic does not see it that way, though.

“I think any contender at this stage of the tournament would have been hard to play against, and that is the way it should be.

“All four teams who are here deserve to be here, and I do not necessarily see Gyor as the toughest of all the possible competitors that we could have gotten.

“That said, I admit that Gyor is a very strong team and they have a tactically great coach as well.

“Again, I say that the defense formation will decide the game. The team with the best defense of the day will take the victory and proceed to the final.

“Quite obviously I hope it will be us!” says Djurdjina Jaukovic.