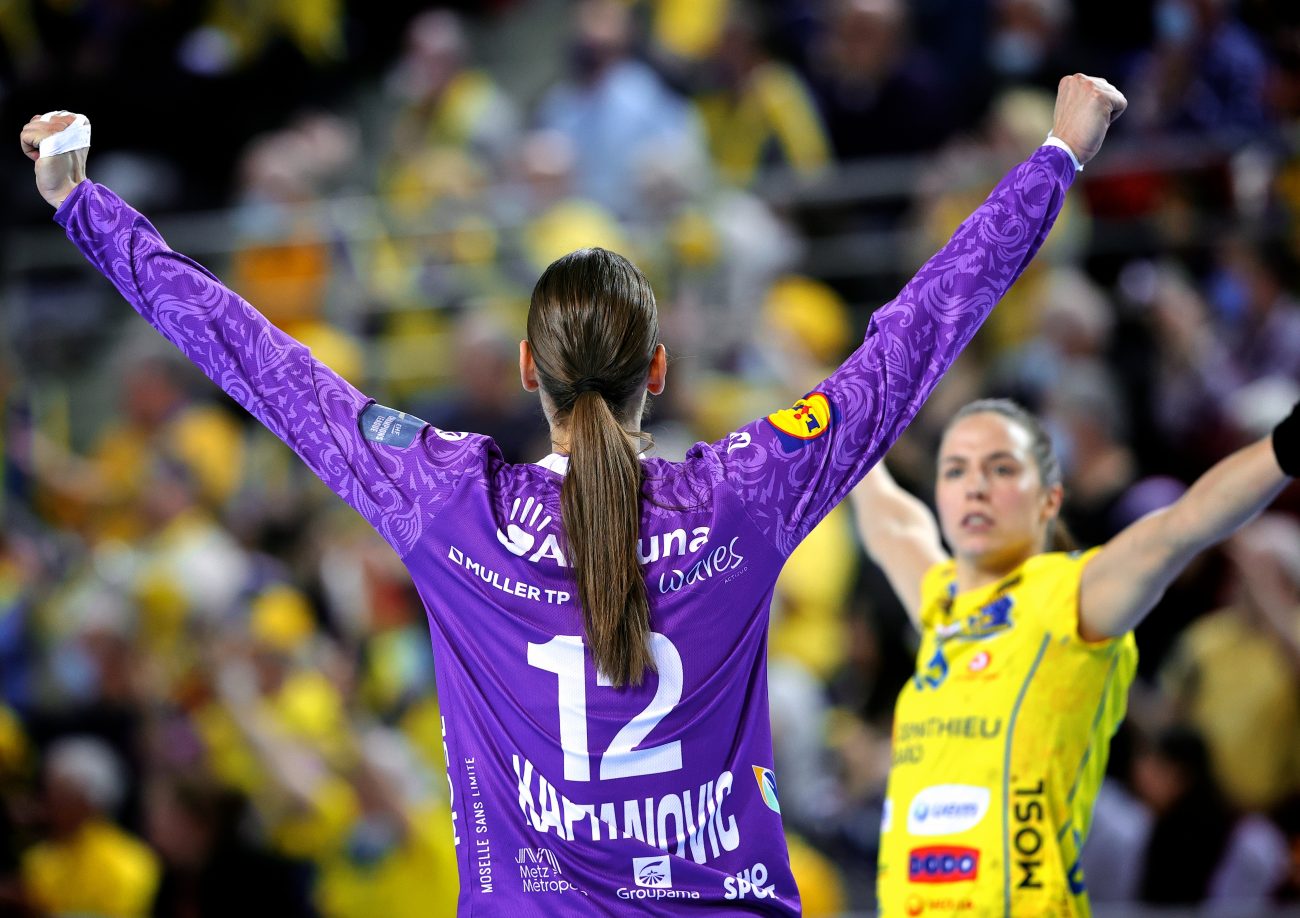 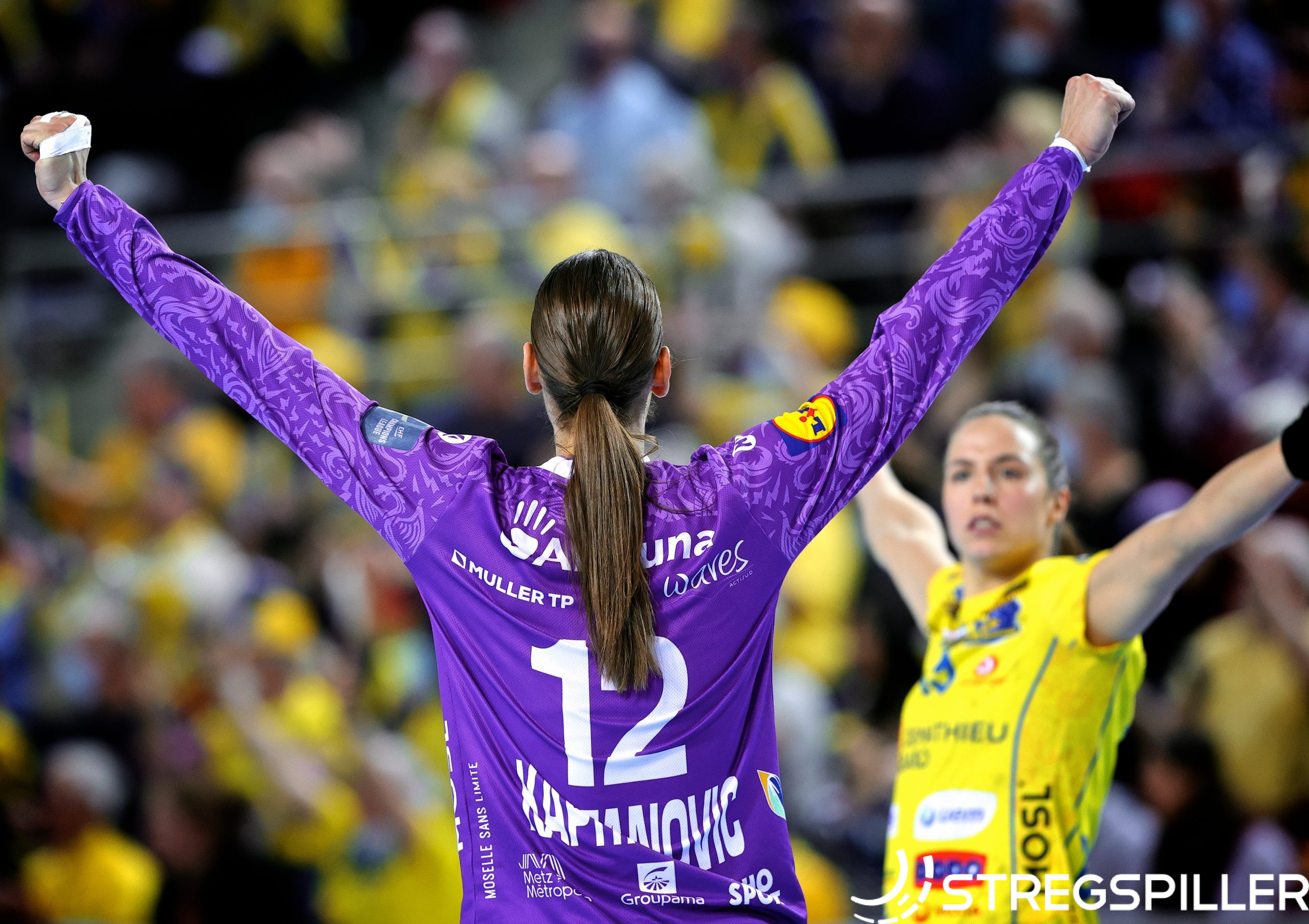 While the competition will have to meet in the quarterfinals of the 2021/22 EHF Champions League, after two decisive victories  against Borussia Dortmund in the Round of Last-16, Metz can now concentrate all their energy on the domestic level as they won’t have to face Russia’s representative, Rostov-Don, because of the suspension by the EHF.

In LFH Division 1 the team of head coach, Emmanuel Mayonnade, is occupying the top spot while keeping a close eye on the second, prestigious trophy – the Coupe de France – down the road.

Like for most other handball clubs it has been a tough road for Metz HB as the COVID pandemic continues to throw curve balls and disrupts what otherwise would be referred to as regular season schedule.  Add to it the death and destruction caused by the military conflict in the Ukraine and it becomes obvious that 2021/22 will go down in handball history as a year anything but another handball season.

Aside from the ongoing health concerns affecting the broader public, Metz had their fair share of significant set backs over the course of the past eight months. The career ending injury of Olga Peredery caused a gap not only on the line but in central defense as well.  N’Gouan, Micijevic and the two youngsters, Jacques and Bouktit, stepped up collectively to deal with the problem.

More recently, the injury of goalkeeper, Hatadou Sako could have spelled disaster, but in the critical home game against Odense during the Champions League group phase, another young talent rose to the occasion.  Goalkeeper, Melanie Halter, literally saved that day.

The subsequent return of center-back, Grace Zaadi can hardly be overemphasized, now that Bruna de Paula is hurt as well.  The Olympic champion is one of the world’s best players on this position and her experience will show in particular at the FINAL4, in Budapest.

Although, the 2nd leg Champions League match against the German representative was anything but a close affair, Metz club president, Thierry Weizman, felt relieved and exited at the same time after the final whistle. The French record champions from the Grand Est region will make their second trip to the EHF FINAL4 after their maiden voyage back in 2019.

“It was a terrible long time for this moment to arrive again.  When I left Budapest after the first time, my only hope was to come back.  It’s a wonderful competition, it’s like a dream.

“But, when we saw the draw at the beginning of this season, we realized that it would be very, very difficult.  In fact, I did not expect us to go back (to the FINAL4 ed.) this season.  It was very hard.

“It’s a miracle, but we have a good coach, good staff, a wonderful team and a wonderful audience here at “Les Arenes”.  We just experienced a great evening in a fantastic atmosphere.  Finally, it worked – we are ready to go back to Budapest.”

Likewise, Croatian international and EHF EURO 2020 bronze medal winner, Camilla Micijevic, can hardly wait to experience her first time at the FINAL4, in Budapest, when she shared her feelings after the win against Dortmund.

“I still can’t believe that we made it to the FINAL4.  Now, we have to wait another two months.  At the same time we have so many goals and a lot of work in front of us in the French league.  What can I say – we are in the FINAL4.  I am so happy.

For right-back, Louise Burgaard the return of Metz to the EHF FINAL4 feels like vindication of sorts, as the COVID pandemic led to the cancellation the 2019/20 Champions League season, including the pinnacle event in Hungary’s capital.

“I feel like we have come a long way, but we are not finished, yet. Right now, I don’t dare to talk about a successful season until we have it all wrapped up in the middle of June.”

The EHF’s decision to suspend the Russian clubs from the competition ultimately led to the situation for Metz to skip the quarterfinals and advance straight to the FINAL4, in early June.  Louise Burgaard agrees that the timing of the qualification feels unusual, but looks forward to top the previous achievement of Metz in 2019.

“Yes, it does feel a bit strange, but personally speaking it feels like I did not get the chance in my first year in Metz, when COVID hit and shut everything down.  Some people may say, that we were lucky, now.  For me it’s the opportunity set that we had in front of us back in 2020.

“When we return to the FINAL4, we won’t go there to become the fourth best club in the world again.  We go there to do more.

No matter which other clubs we will face, there will be only top class teams in Budapest.  I am so much looking forward to this weekend.  It will be so compressed and over the course of two days, we will have to be at our best.  It’ll be crazy.”

The statement of Louise Burgaard designating the winner of the EHF Champions League FINAL4 as the “best club in the world”, reflects the status of the season-ending event.  Unlike on the men’s side, where the International Handball Federation organizes a club world championship in Saudi Arabia every year, there is no such event for women.

For women’s handball the EHF FINAL4 simply is the cherry on the icing of the cake.

For now, Metz will have to wait for the other three teams to play a final round of Champions League handball on June 4 and 5, at Budapest’s MVM Dome.  In the upcoming quarterfinals the following six clubs will face each other:

So far, the club, the squad and coaching staff have shown a remarkable resilience while fighting through adversity – it bodes well for the remainder of the season.