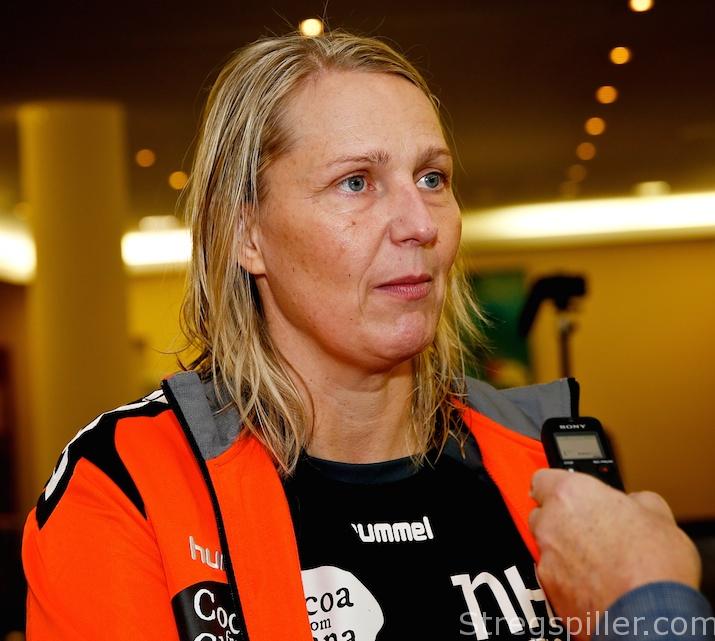 INTERVIEW – For Helle Thomsen, it does not appear to be a problem coaching the Dutch national team and CSM Bucuresti at the same time.

In this interview with stregspiller.com, she also claims to be fine with the pressure that goes along with being in charge of one of the best national teams and a very ambitious Champions League club.

Is it good advice coaching a club next to a national team? And is it beneficial for the teams involved?

These questions have been debated time and again, but for Helle Thomsen, there is no doubt that she can handle both jobs and manage them well.

For the time being, she is working as the national coach of The Netherlands, and at the same time, she is head coach in CSM Bucuresti.

In other words, she is in charge of not only one of the best women´s national teams in the world, but also of one of the strongest clubs.

“Double-duties are no problem to me.

“I have the experience from the time, when I was national coach in Sweden while leading FC Midtylland at the same time.  The amount of time I spent on my two jobs now is not any different from back then.

“I do not really feel that there are any big changes in mentality. Handball players are more or less the same everywhere,” claims Helle Thomsen, who is busy preparing the Dutch women’s team at the World Championship, in Germany.

She can do so without feeling neglecting CSM, as most of the club players compete at the World Championship anyway.

In her job as national coach, she has her worries as her team opened the tournament with a 22:24 defeat against South Korea.  A loss many didn’t see coming.

In the following game, The Netherlands did their duty, when they defeated China 40:15.

“I am not sure I agree that our defeat against Korea was a surprise.

“They have a very good team, and we simply lost to a squad that played better than us on that day.

I do admit, though, that it was not one of our best games, and in particular, we did not have sufficient power from our backcourt line.

“However, I also think people have to modify their expectations, considering the personnel situation on our team.

Nycke Groost has only recently returned from an injury, Estavana Polman is still striving to reach her top form after giving birth, Maura Visser is pregnant, and Sanne Van Olpen is injured as well.

“Still, it goes without saying that we hope to go far, once again, and that we will do our best doing so,” she says.

In both her jobs, expectations from the outside are huge, putting pressure on her a well as her players.

The Netherlands reached the final at the 2015 World- as well as at the 2016 European championship, and the whole nation is yearning for a gold medal, while in Bucuresti hopes are not any smaller.

“However, I think that this pressure can be positive, also for the players.

“They have to get used to these pressure situations from an early age, as it will follow them as long as they play handball at top level.

“You also have to bear in mind, that when people have high expectations, it is because you are good!” she adds.

While the entire Dutch nation is hoping for a gold medal, the owners of CSM Bucuresti are just as eager to winning the Champions League again, just as the club did in its maiden European campaign in the 2015/16 season.

While the Dutch Handball Federation is not exactly known for sacking coaches, patience is running out quickly at CSM when a coach doesn’t deliver.

CSM have already lost one Champions League game this season – 22:25 on the road against Danish champion, Nykøbing Falster. There is not much room for additional mistakes.

“That was something I knew when I signed on, and it is a fact I live with every day – I am okay with it.

“Our first objective it to reach the FINAL4, and once we are there, anything can happen.

“We have the potential to win the Champions League, but so do several other teams.

“One of the things I am looking forward to is visiting FC Midtjylland with CSM in the main round in the new-year.

“I had a great time with the club, and I still know a lot of good people there.”