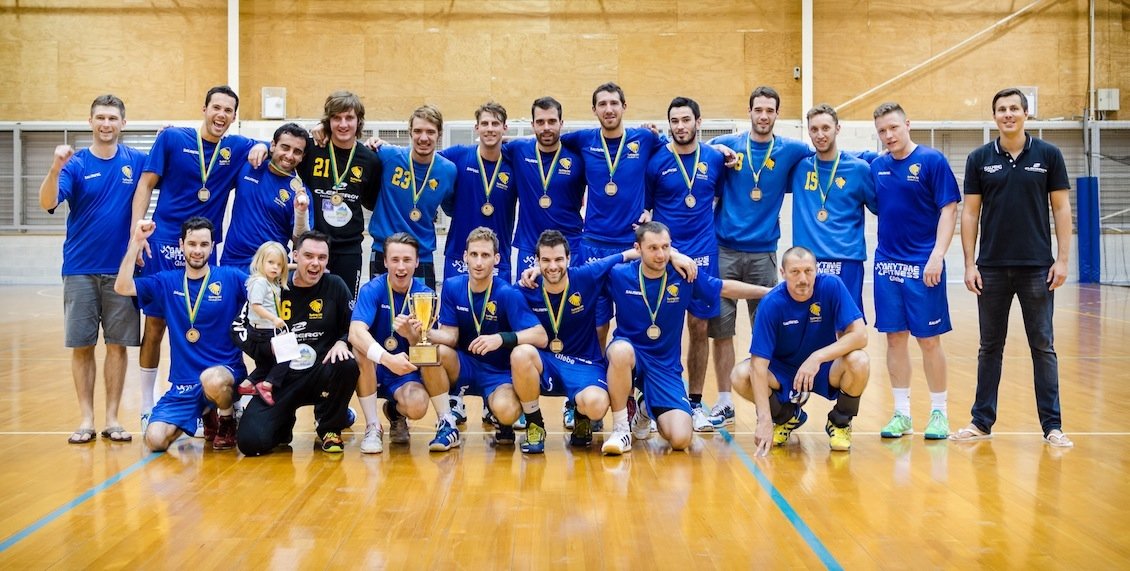 It was only in August of 2013 when Sydney University’s head coach and Hamburg native Philipp Enders shook hands with his colleague Martin Schwalb congratulating him to a 35:15 (20:4) HSV victory at the IHF Super Globe – the tournament in Doha (Qatar) also known as the “Club World Championship”. In recent years the event has become a mainstay in the calendar of handball’s premier teams not the least for the hefty prize money that the winner takes home. Funds that both organizations could use well, barely twelve months after their last encounter on the handball court.

Currently, both clubs find themselves in fund raising mode albeit for very different reasons. As Hamburg’s quest for economic survival has been widely publicized and discussed, Sydney University HC is looking to raise some extra cash simply in support of making another trip to Qatar. Unlike the team from the north of Germany, Sydney “did it again” in 2014.

In April, Diego Llorente & Co. celebrated another Australian Championship in a tight and hard fought final match against longtime rival St. Kilda HC. While the team from Melbourne led by former national player Velibor Vujaklija and Bratislav Stankovic (previously Nis, Bologna and Partizan Belgrade) showed tough resistance during regulation time it had to pay tribute to the fast pace and athleticism of the team from the state capital of New South Wales, eventually. 34:28 was the score at the end of extra time. For Sydney the result not only ensured another domestic championship but a trip to the Oceania Club Championship in New Caledonia later in June.

Prior to the three-hours flight to the French overseas territory, local club AS Dumbea was ranking high on coach Ender’s list of teams to beat because of New Caledonia’s long handball tradition. But this time the successful trainer would miss the journey to the archipelago 2.000 km north-west of Sydney otherwise known for its significant nickel possessions. A family affair took precedence and in his absence Australia’s newly appointed national handball coach, Jan Ottosen, served as his temporary replacement. Ottosen was not the only newcomer; Constantin Striebel a former U18 national player from Germany had arrived in Australia not too long ago and joined team Sydney just in time before the pivotal tournament in New Caledonia.

As it turned out the initial concerns of Philipp Enders were unfounded as the squad from Dumbea was no match for Australia’s number one club. When all was said and done Sydney had crushed any hope of the New Caledonians to advance to the championship final by a margin of 41:23. The result also meant that once again it was up to St. Kilda and Sydney to determine which team would take the ultimate trophy – the right to join the world’s best handball athletes in Doha and fight for the Club World Championship.

Like a couple of months before the Oceania Club Championship ended in thrilling fashion with Sydney University pulling out a one-goal win (24:23), courtesy of fantastic goalkeeping by Ben Fogerty and Mickael Alcaraz in the dying seconds of the match. After the game Diego Llorente (Sydney) was named top scorer of the tournament with 22 goals ahead of Edson Chambonnier‘s (Dumbea) 19. Thomas Gerstch (St. Kilda) was awarded Best Goalkeeper and the team of ACP Poya was rewarded with the Fair Play trophy.

Sydney’s next stop will be Doha. The IHF Super Globe will take place between September 7– 12, 2014 and be played in two groups of four teams each. After three group-match days, the two best-ranked clubs from each contingent will face off in the semi-finals before determining the ultimate winner. In Group B the team from Sydney will meet defending champion Barcelona, Africa’s Esperance Tunis and host Al-Sadd. After three consecutive appearances at the event coach Enders has surely set his sight at scoring a first victory. He knows as well that although the tournament will be admission free there won’t be a “free lunch”. For example, in 2013 the squad of Al-Sadd included nobody less than Spain’s goalkeeping legend Jose Javier Hombrados. Playing five games in six days at the highest level, present yet another hurdle that the representative from Oceania had struggled with previously. How will the team from “Down Under” deal with the challenges of top talent and fatigue this year?

Four of Sydney’s players that won the Australian title in 2014 – Jonathan Lennstrom (SWE), Diego Llorente (ESP), Tomasz Szklarski (POL), Sebastien Traverso (AUS) – already made the trip to the desert state last year but for Constantin Striebel, Franco Gavidia and Pierre Bonin it will be a first when on September 7 at 17:00 hours local time the whistle blows and part one of their (handball) dream will come true against the African champion of Esperance Tunis. And if Sydney can somewhat improve on last year’s average scoring record of 16 goals per game while holding the opponent to less than 30 points it may as well turn into a sweet dream.

Coach Enders has been there before and will manage the exhilaration and eagerness of his “young guns” accordingly. The necessary support will be provided by the people who are part of team Sydney’s DNA like team manager Zoran Jelicic or the club’s vice-president and longtime goalkeeper Pascal Winkler. It is people like Enders, Jelicic and Winkler that have not only created excitement for one of the most dynamic sports in the world but have built a handball foundation “Down Under” that year after year attracts handball players from around the world to compete for a slot at handball’s most exotic event – the IHF Super Globe. Where else but in Australia could such adventure take root otherwise?

“Do you come from a land down under

Where women glow and men plunder