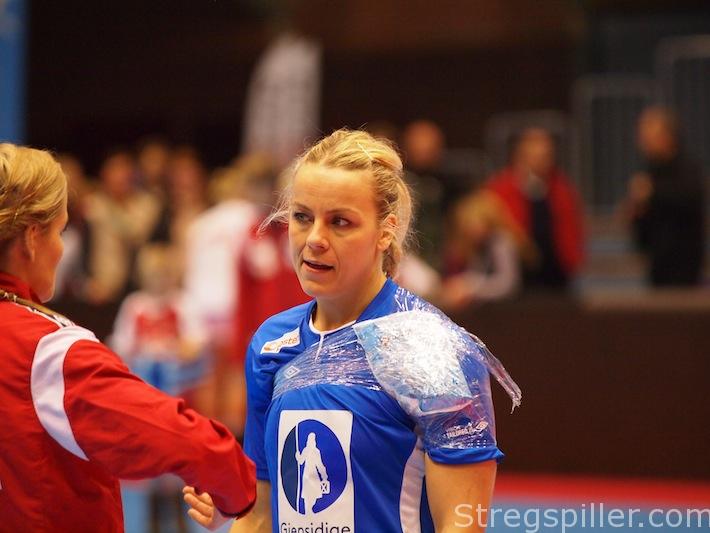 The last handball tournament played on Norwegian soil in preparation for the 2013 World Cup in Serbia took place in Drammen a city better known for Aass, the country’s oldest surviving beer brewery founded in 1834.  Norway’s Handball Federation had extended invitations to the teams of Russia, the Netherlands and South-Korea to fight for the traditional Mobelringen-Cup trophy.  To make a long story short team Norway emerged as the clear winner of the three-day event after booking three consecutive wins.  Still coach Hergeirsson was dissatisfied.  To no real surprise central defense revealed gapping holes in the games against the Netherlands and South-Korea especially.  In their opening match against the Dutch team Mari Molid as well as Ida Alstad were struggling to effectively guard a superb playing Nycke Groot.  Time and again the Dutch were able to score easy goals from center positions.  Offensively the reigning world champion was relying on the individual class of Anja Hammerseng-Edin and shooting ability of Linn Jorum Sulland who had regained her self-confidence just in time.  In addition to the defense problems the fast paced attacking game of Norway also produced a wealth of technical errors and turnovers much to the distress of “Landslagstrener” Mia Hermansson Hoegdahl.

On the bright side players like Katrine Lunde, Heidi Loke, Nora Moerk and Tonje Nostvold delivered solid performances as expected.  Tonje Nostvold in particular may prove to be the experienced and valuable alternative for coach Hergeirsson in case Sulland struggles or needs a break otherwise.  To mind comes the Olympic final game 2012 when Nostvold contributed a few important goals at clutch moments of the match.

But the leadership and defensive qualities of team captain Marit-Malm Frafjord and Kristine Lunde-Borgersen will be dearly missed and cannot be easily replaced – so much is clear.  Literally, the Norwegian team has to move closer together in order to earn a fighting chance to regain their title. Mari Molid is a solid defender but for now she needs all the help she can get from her teammates.  The opening game against Spain at World Cup 2013 will have the quality of a finale and Martha Mangue and Alexandrina Barbosa will apply a true stress test to Norway’s defense.  The winner of this match is expected to win Group C and possibly the eighth-final as well.  Incentives galore but will the Norwegian collective have the motivation and will power to keep the world crown following years of success and Cinderella endings?