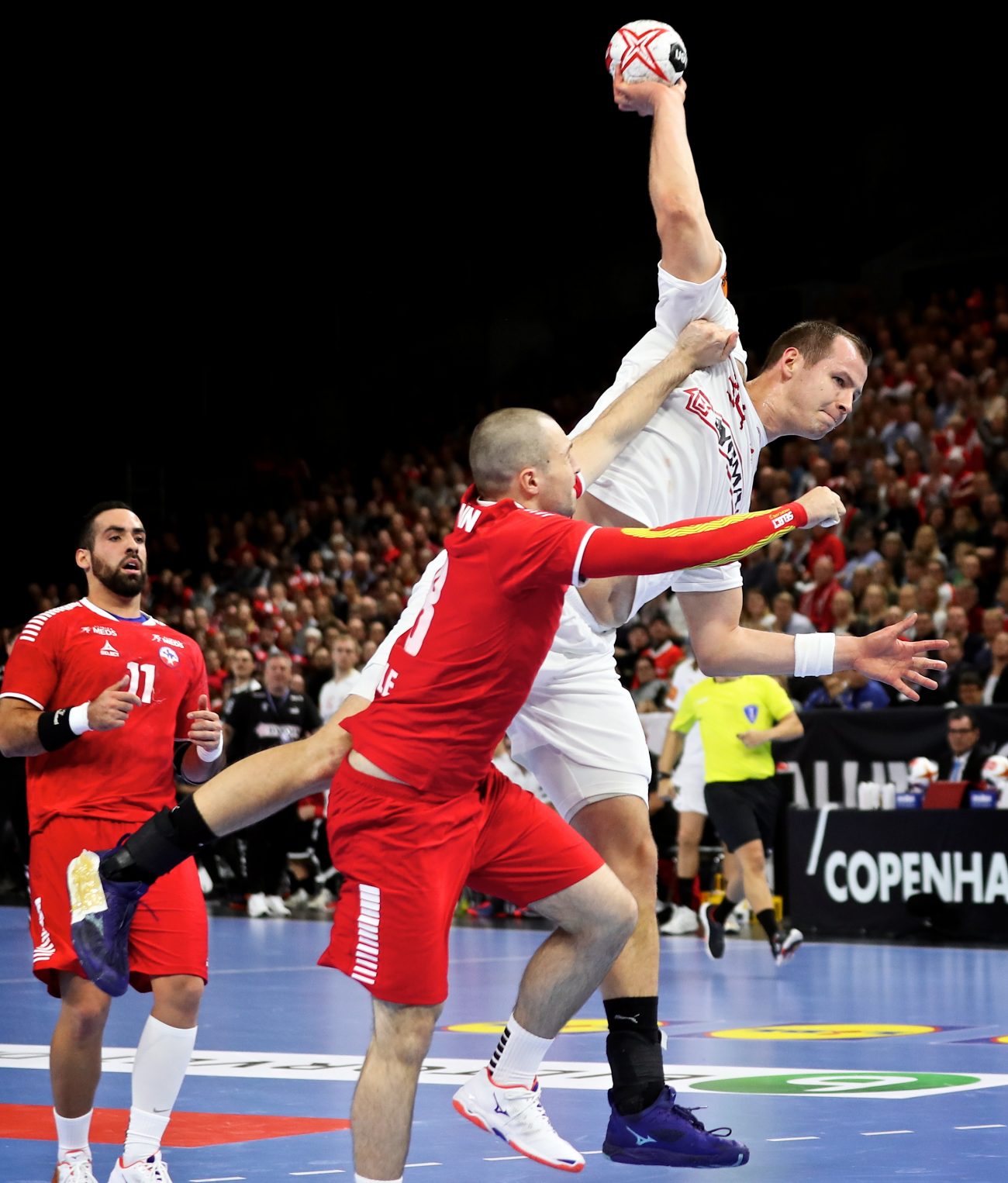 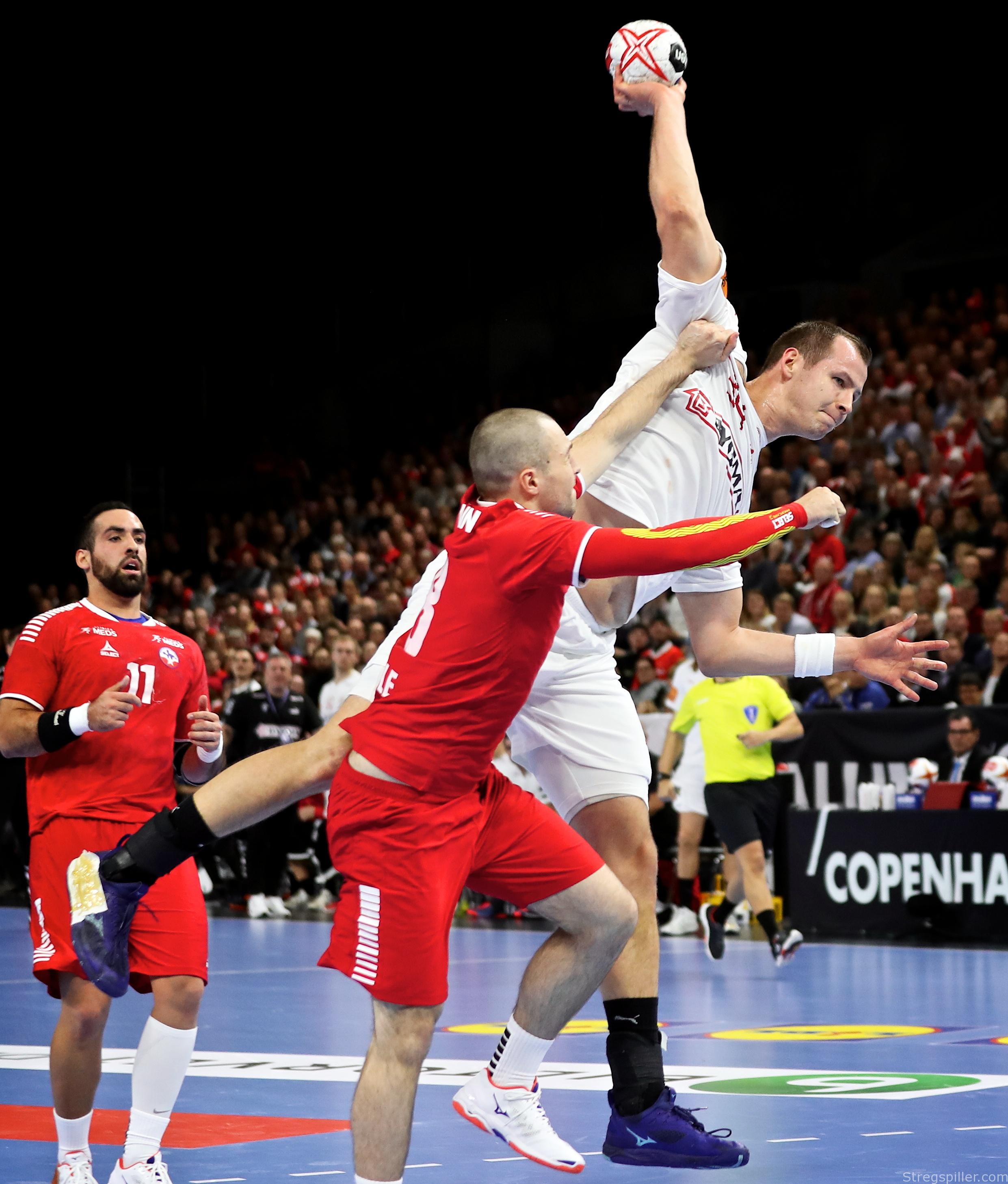 MATCH REVIEW – Just as expected, Chile was no match for Denmark in the opening game of the 2019 World Championship.

In a packed Royal Arena, the hosts cruised to a 23 goal-win, a margin that could have easily been higher.

People may not think much of Chile, but in fact, the team does include a former Champions League winner. 36-year-old line player, Marco Oneto, won the competition with FC Barcelona in 2011, but the most prominent person in the South American delegation still is their coach, former handball legend, Mateo Garralda, a six times Champions League winner and World champion as a player.

However, the 49-year-old Spaniard had his work cut out even before today’s match, as Chile barely qualified to the final tournament in Denmark. The South-Americans booked a third and last qualifying spot at the Pan American championship, only after defeating host, Greenland, 39:36 after extra time.

To make a long story short: Denmark swept Chile, especially in the first half Feuchtman & Co. could not stop a barrage of fast breaks.

Chile were helpless as the Danes were not only superior in all tactical aspects of the game, but were physically stronger as well. If Denmark had maintained maximum focus throughout the second half, the result would have been much worse.

Chile began playing without their former Champions League winner, Marco Oneto, but even in his best days, he could not have saved his team in the first 30 minutes of the game, in particular. In fact, Oneto´s substitute on the line, Esteban Salinas handed Chile a lead on their very first attack in the match.

Yet, this was as much fun as Chile could get. Seven minutes later, the score read 7:1 in favor of Denmark and the only challenge for coach Jacobsen’s men was to keep up their concentration.

Pushed by an almost sold-out Royal Arena, Denmark kept the momentum and turned up the heat. One fast break after another rolled towards goalkeeper, Felipe Barrientos, who probably had the worst job in the arena this evening.

Denmark’s intensity dropped temporarily, when Nikolaj Jacobsen began rotating his team, but it did not take long, before the host was back in control.

The team from Scandinavia was never really tested against a weak and slow Chilean attack and in goal, Niklas Landin had no trouble with the few balls that came his way.

In fact, Mikkel Hansen & Co. did not allow their opponents to score in the last 19 minutes of the half, as Denmark went from 8:4 to 22:4.

One question at the beginning of the half was if Chile would end up in double digits and yet another one if Denmark would manage to score 40 goals?

The first question was answered after 12 minutes already, when Chile reduced to 28:10. The second one took a but longer as Denmark did not exceed the score of 39 goals in the dying seconds of the game.

Chile scored the first two goals after the break, as the Danes were hit by two consecutive suspensions.   At the same time, Nikolaj Jacobsen seemed to think that it was time for some experiments.

Aside from changing goalkeepers and wings, he ordered Mikkel Hansen on the right back position, while Nikolaj Markussen played on the left side.

A series of two-minutes suspensions took the intensity and pace out of the match. Chile cut the gap a couple of times, before Denmark continued to press before the final buzzer sounded.

“We may have been too impressed in the first half, not necessarily by the crowd, but by the opponent.

“Our second half was much more like the Chile that I know. Of course, we are not happy, but what we did in the second half is what we’ll take to the next games. We are still in a learning process.”

“It is always nice to win and winning big is even nicer.

“We got the chance to run plenty of fast breaks, especially in the first half, while we experienced some trouble when he had to play five-against-six for some time in the second half.

“I think we gained some self-confidence even from this kind of victory. And, we may need it, as we’ll face much tougher resistance in our next game against Tunisia.”

Senores, Fonseca and Santos – and the rest of us for that matter – must feel lucky that the match was not a tight contest.

The two Portuguese did not have a particularly good evening with a number of mysterious decisions and a “line” that hardly existed.

After the break, it seemed as if someone had told them to award more suspensions and penalties. Such verdicts came fast and furious in the second half. It certainly was confusing and it reduced the quality of a one-sided game.

12.500 spectators were on deck in Copenhagen’s Royal Arena and despite a lack of intensity on the floor, they kept up an outstanding and enthusiastic atmosphere throughout the match.

Chile will be looking at another defeat on Saturday when they meet Austria.

On the same day, Denmark can expect more resistance as well, when Tunisia will be the opponent in Herning’s Boxen arena. Still, the team from North Africans should not pose a serious threat.