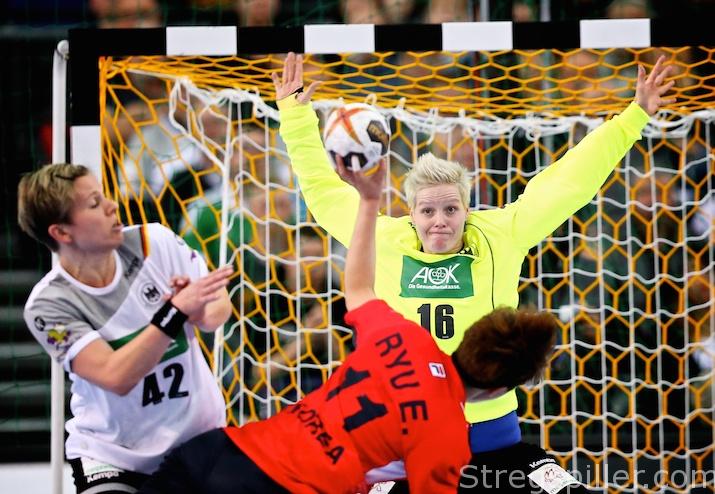 For the first time during this championship, all 24 teams hit the court on Sunday. And after a day of surprises, there were fewer unexpected results.

The German host was teetering on the edge as they struggled with South Korea throughout the first half. But in the final 30 minutes Loerper & Co. managed to turn the tables in convincing style.

Germany got off to the expected start with a clear 28:15 win against Cameroon, but the home team was dealing with severe injury problems, especially after playmaker Kim Naidzinavicius had to be carried off with a torn anterior cruciate ligament after two minutes and 10 seconds in the opening match.

The Koreans came off a sensational 24:22 win against The Netherlands, and one of the pressing questions was if they were able to keep up the same pace only 26 hours following the victory against the Dutch team.

Would the German back-court line have the same problems with the aggressive Korean defense as the Dutch had on the previous day?  Both coaches had to make changes because of injuries in their opening matches.

Germany, added right back, Alicia Stolle to the squad, while another right back, Ji In Jung had to replace playmaker Han Na Gwon on Korea’s side.

For the better part of 30 minutes, Germany had just about the same issues with South Korea, as The Netherlands had the day before.

However, a combination of tactical cleverness and great team spirit on Germany’s side changed the picture after the first half. South Korea lacked the physical resources and ideas in order to create another astonishing result.

In the beginning, the Koreans caused Germany the same problems, as they did against the Dutch.

In particular, Germany’s defense had serious trouble controlling a fast Korean attack, and on the other end of the court it did not look much better.

No wonder Korea pulled ahead by three goals for a good part of the first half. But a resilient German squad slowly but surely began cutting the deficit, aided by an increasing number of Korean mistakes. By the 25th minute Germany had worked itself back into the game. First, a flawless Julia Behnke scored the equalizer (9:9), followed by the first lead of the home team, once again courtesy of the line player from TuS Metzingen, who had a perfect match shooting 4/4.

Katja Kramarczyk who had replaced a hapless Clara Woltering in goal was the other key factor that helped the host to turn things around.

And Nadja Mansson’s buzzer beater sent 5,794 spectators, at Leipzig arena into a frenzy.

Korea opened the second half drawing even twice (11:11 and 12:12), but it would be the last time they were in touch with Team Germany.

When Svenja Huber provided Germany their first two-goal lead at 14:12, it was the beginning of the end for the Asian representative at World Cup 2017.

The Korean players were just not able to maintain their high pace, and apart from getting tired, they also suffered from a a lack of ideas as they neglected their wings completely, while concentrating on scoring from central positions instead.

Obviously this made the job so much easier for Germany’s defense and Kramarczyk in goal.

As a consequence, Germany increased their lead steadily for the rest of the match, and were up by six goals (23:17) just before Korea cut the score to the final result.

The Germans are not only heading towards the Round of Last 16, but quite possibly towards a top position in Group D.

However, there is no doubt that we will see a lot more of Korea at this World Championship. In their first two matches they have shown that there is much more quality in the team than everybody expected.

Before the tournament, Cameroon´s coach, Jean Marie Zambo, stated that his team´s objective was a semi-final appearance. With such a goal in mind, it’s a bad idea to open a World Cup with two outsized defeats, just as the Africans did.

A 28:15 loss against Germany followed yet another 13-goal trashing against Serbia (34:21). It even took Cameroon 13 + minutes to score their first goal.

At that point, Serbia were already leading 9:0, in a match, where national coach, Ljubomir Obradovic, could afford to rest Andrea Lekic for the second game in succession.

“My players did not respect what I told them to do,” Jean Marie Zambo later complained.

The Netherlands got an easy opponent to redeem itself after their sensational 24:22 defeat against South Korea.

And Helle Thomsen´s ladies did what was expected of them, and they could find further encouragement by the fact that they beat China by an even larger margin than Serbia on the previous day.

Surprise of the Day #1

Poland, who earned an impressive 33:30 opening win against Sweden Saturday, were not able to follow through against the Czech Republic.

Poland were in control throughout the first half and way into the second, but the Czechs managed to turn the tables, and in the final minutes of the game, they ran away with the victory – now being on four points after two matches.

For long stretches of the match, Slovenia was close for a second surprise in a row after defeating France 24:23, on Saturday.

The Balkan nation was leading by five goals in the first half, but eventually Romania caught up and in the end, Amrbros Martín´s girls left no doubt who would win this match.

The Montenegrins were unable to repeat their impressive 31:24 opening win against Denmark, but they did manage to create some excitement.

With 11 minutes and 12 seconds left, however, Katarina Bulatovic scored the equalizer for the first time of the match (21:21), but she and her teammates could hold on to it, as the Russians ran off with a four-goals victory.

For the second day in succession, Brazil came back from a clear deficit.

Following a 28:28 draw against Japan on Saturday, the Brazilian comeback was enough secure a win this time. In a thrilling finish, Tunisia were defeated 23:22.

The North Africans are still on zero points, while Brazil – now with three points – boosted their chances to proceed to the knockout stage.