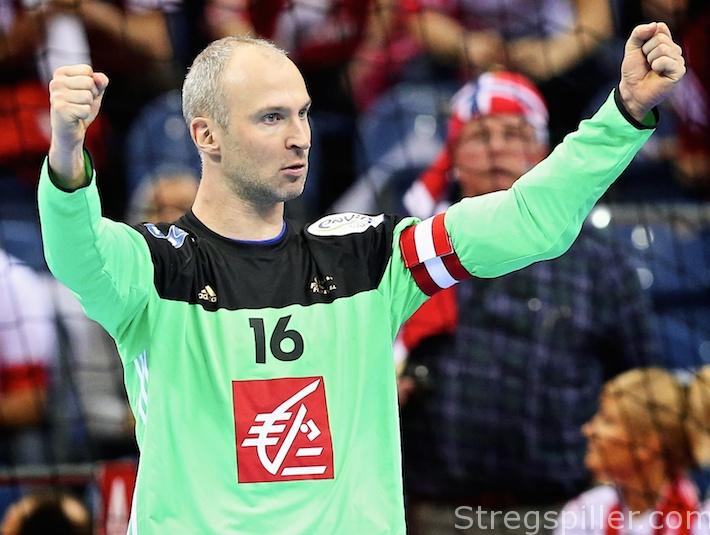 “I enjoy being here one last time”

At age 40, Thierry Omeyer will play his last two international matches this week against Norway.  Instead of feeling sad, he appears to be really focused on these last two matches, as winning both of them would translate into an early EURO 2018 qualification for France.  Aside of the task on hand, he is confident about the future of the French team, a “very bright one” as he puts it.

Thierry, while packing up your bag on Monday, did you realize that it would be the last time you travel to an international match?

TO:  Actually, yes I did.  But then the thought vanished and since I’ve been here, I feel more like it’s a regular week; the same as many I’ve known since the beginning of my career.  There are two very important matches for the future of the French national team ahead of us – so we are focused.  But I know this will be something special for sure.

Does this thought stick in the back of your head?

TO:  No, it’s not something I think about all day.  I’m really focused on these games (against Norway ed.) as well as on what I can give the two young guys who’ve just arrived – Julien Meyer and Melvyn Richardson.  We’re trying to transfer some of our knowledge, that’s why we’re still here – Daniel (Narcisse ed.) and I.  We really wanted to wrap up this season, to make the moment last with our friends.  The weirdest thing will probably be when I won’t get the call from the coach anymore and when I watch the games on TV.

You’ve announced your decision more than a month ago.  Does it make this week any easier, emotionally?

TO:  The press conference was a very strong moment for Daniel and me.  But it was good to announce our retirement as soon as possible and also to do it ahead of the two important matches against Norway.

Are you relaxed or do you feel comfortable about the future of the French national team when you see the new generation taken over?

TO:  I have no worries about the future of this team.  For a long time, we’ve seen that it has the ability to re-new itself with young players, who gradually take their marks until they step into important roles.  Some young players have shown a lot of their skill already, even though they’ll have to prove themselves in the long term.  Players like Nédim Rémili or Ludovic Fabregas have only been here for a year and will keep their place for a decade or even longer.  Honestly, when I see the talent and the maturity they have, I’m not worried.  During the next competitions, I’ll be their number one fan and I’ll be happy to enjoy all of this one last time this week.

This week will mark your last international appearance, and Julien Meyer’s first, what do you think of him?

TO: We’re from the same region, we played for the same club and we both went to school in the same place. Does it mean anything?  No, but it’s funny.  I never had the occasion to talk with him before Monday’s practice.  I’m happy to be able to help him with a few details if I can.  He’s still very young, only twenty, and he has a lot to learn and to prove but he got qualities.  He needs to be given time, goalkeeping is a position where you learn all the time.

He (Julie Meyer ed.) was telling us earlier that he was too young and did not see you wearing the Sélestat jersey, does that make you feel old?

TO:  I think that when I played my first game with Selestat, he wasn’t even born.  And when I left, he must have been three or four.  I felt old when I saw guys who were twenty years younger than me in the French national team. (laughs)

If you had to give him one piece of advice, since he’s beginning his international career, what would it be?

TO:  Tough question – in this position, enjoying what you do is very important.  Goalkeeping is a mental thing.  You have to keep working all the time.  Julien is gifted and he’s a hard worker too.  He plays a position where you have to repeat the basics all the time.  But you have to let him lead his career; let him take care of himself and now that we’re getting to know each other a little bit more, I’m definitely willing to help him.