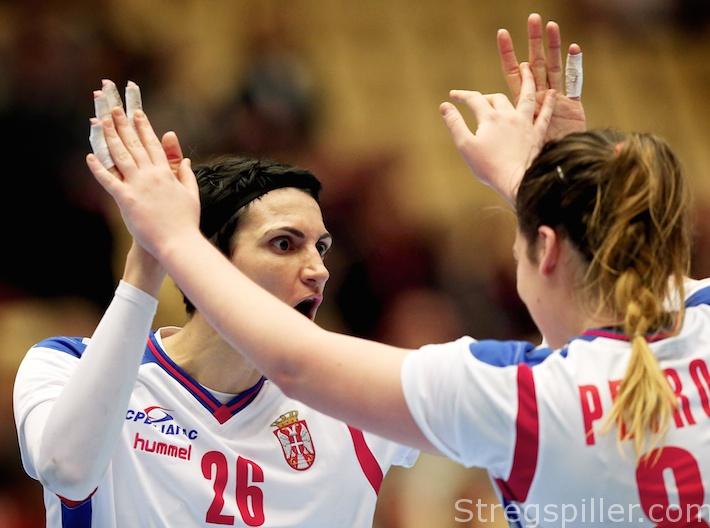 Even without Lekic, Serbia can be dangerous

Even without Serbia´s best female handball player, Andrea Lekic, the team may threaten quite a few opponents in Sweden this December.

In recent years, Serbia have only accomplished impressive performances on home ground.  It all began in 2012 when they were hosting the European championship after the Netherlands had given up on the event. Serbia reached the semi-final and only lost the bronze match after extra time against Hungary.

They continued their upward trend 12 months later at the World Championship, played on home soil once again, as they reached the final, where they lost to Brazil.

Aside from these stellar performances, we have not seen much of Serbia on the international stage.  Part of the explanation is, of course, the boycott of some of the country´s most prominent players like Andrea Lekic, Katarina Tomasevic and Sanja Damnjanovic.

Allegedly, coach Sasa Boskovic, was the main reason for the players decision to not play in the national team anymore.  And even though former goalkeeper coach Dragica Djuric has replaced him, Lekic and Damnjanovic have not returned to the squad while Tomasevic is pregnant at the moment.

Undefeated through the qualifiers

Apart from Tomasevic, there is no doubt that Andrea Lekic is the key player that Serbia misses the most. But even without the two, the Balkan team managed to go through their qualification campaign without losing a match against opposition that has to be described as modest – Czech Republic, Ukraine and Italy were the other three teams in their group.

Still, there is no doubt that the Serbian crew gained self-confidence winning most of the qualifiers, as any team would winning so many matches.

Such self-confidence will undoubtedly be of great use at EURO’16 in Sweden, where they have benefited from a fortunate draw once again.

Without the shadow of a doubt, Serbia are in a bracket that looks easier when compared to the teams in Group C and D, although their opponents in Group A – Sweden, Spain and Slovenia – cannot be underestimated.  And the same goes for their possible main round adversaries, France, Netherlands, Poland and Germany.

Apart from a well-developed fighting spirit and self-confidence, Serbia´s ability to change their defense constantly from 6-0 to 3-2-1 to 4-2 may make them a very difficult opponent to many teams.

In Group A, Serbia will be in a close battle with Slovenia for the last main round spot.  They will succeed, but opposition in the main round will be too tough to handle, and a place among the top 10 is the best they can hope for.

Without Tomasevic, the goalkeeper position represents the Achilles tendon of Team Serbia, and even though they have three goalkeepers in their squad, a lot will be resting on the shoulders of 22-years old Jovana Risovic.

She plays in a club – Randers HK – that has not been particularly successful in the Danish league as of late, although they have qualified for the EHF Cup group phase.

Furthermore, she has been a bit in the shadow of Danish international Cecilie Greve , but there is no doubt that Risovic will have to rise to the occasion, if Serbia are to have any chance to succeed in Sweden.

Without Andrea Lekic in the team, it is mainly up to Kristina Liscevic to orchestrate Serbia’s offense, and there is no doubt that the 27-year-old Kuban Krasnodar player can do this very well.  As a matter fact, she will have to, in order to keep Serbian hopes alive.

Pop-Lazic has been blooming since joining French Champions League participant, Metz, last summer, and the Serbian national team is expected to benefit as well.

Her biggest qualities are in defense, but from time to time she has also proven to be a highly qualified pivot, supporting Serbia’s attack as well. Her eight goals, when Metz defeated Buducnost 28:25 in a recent Champions League game illustrate her qualities on the other side of the court quite clearly.