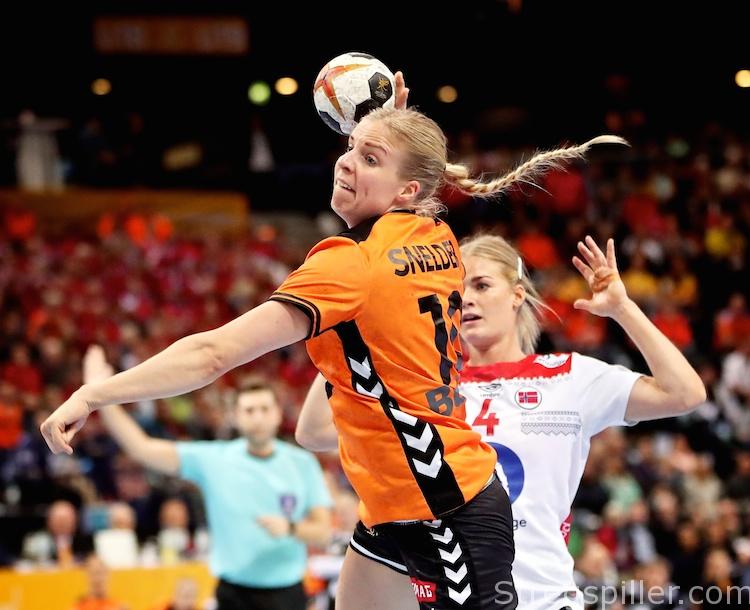 When you play against Norway, you can’t allow yourself a false start. But The Netherlands did exactly that and as a consequence the team of Helle Thomsen was down by six goals after ten minutes. The Danish coach had to take her second timeout early in the game, but it was too late already. The poor start decided the match, as Danick Snelder confirmed afterwards in the mixed zone.

Everybody knows that Norway is a good team, but I think in the first 15 minutes it was more your own inability rather than Norway’s skill?

DS: Yes, I think the same. We started so bad and we gave them a chance to feel good about the match early on. From then on they controlled everything, every time we tried to come back. We did a good job giving them a fight in defense, at least. We tried to interrupt their fast breaks. But when you are behind by eight goals after ten minutes it’s going to be very hard and that’s what killed us today.

I think you lost your courage early on, because I saw gaps in the Norwegian defense, but you didn’t go there…

DS: Yes, I don’t know what happened and why, because we had a good feeling before and also tactically we knew there were some weak points that we could exploit. But as you said we didn’t go 100 percent and then they had the chance to close it.

Now, you lost four times in a row against Norway, I guess at this point it also becomes a mental issue – are they unbeatable?

DS: I’m not sure if there is a mental element. Every time we will play against them we try to beat them. We think positive and I think that’s a good thing. Before the match we felt good; it’s not like we were afraid: “Oh my god, we have to play against Norway”. It’s just so very disappointing that we started as we did – they are just too good and there is no easy way come back from that kind of deficit.

But there’s a still bronze medal up for grabs?

DS: Yes, and we will go for it. Of course, tonight we will be sad and angry, but by Sunday we have to change our mind and we want to win that bronze medal.