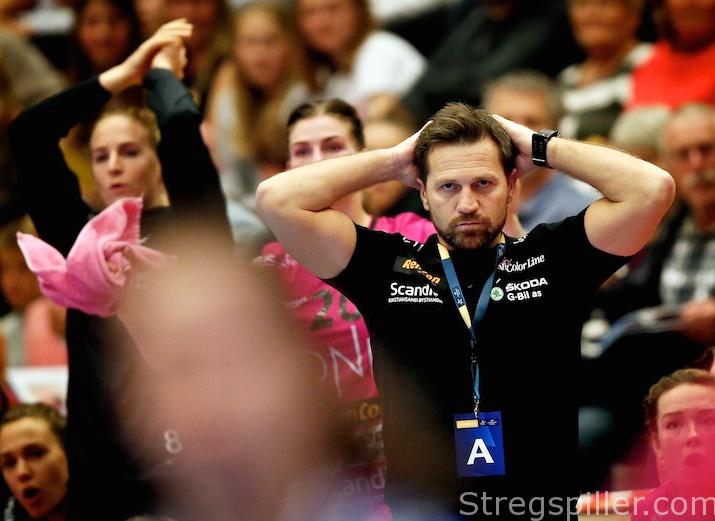 When looking back at the group phase of the Women´s Champions League and the way the main round groups shape up after the last round of play, we have to conclude that the favorites did what was expected of them.

But audiences enjoyed a few refreshing surprises along the way.

This week, the focus is on the three matches that decided the last two tickets for the main round.

Before the weekend, four teams were in contention for the remaining two spots.  One of the games was decided in a direct encounter between Buducnost and Vipers Kristiansand (Group D), while in Group C, Larvik needed Thüringer HC to lose in Vardar ahead of their match versus FTC.

A win in Skopje against flawless Vardar, would suffice for Thüringer HC accessing the main round, while a defeat or a draw would postpone the decision to Sunday after Larvik’s game against FTC.

While Vardar were still missing Andrea Lekic (recovering from a shoulder injury), the situation was much worse for Thüringer’s coach Herbert Müller.

His team roster was down to only nine players – two goalkeepers and seven field players – after a sick Kerstin Wohlbold extended an already long list of players unable to play.

But Müller made good use of the seven field players that he did have at his disposal, as he played seven against six most of the match.  And for a while, the tactic helped as his team changed four-goal deficit (11:7) into a stand-off at half time.

However, the lack of opportunities to make substitutions caught up with Thüringer in the second half.

Vardar coaches Garcia Parrondo and Irina Dibirova reaped the benefits from a much deeper squad and from the simple fact that Vardar was the better team.

When Beate Scheffknecht had to leave the court after a blow to her face, Thüringer could not even play seven-against-six anymore.  But at that time, the tactical step had lost its effectiveness after all, mainly because fatigue was setting in among the players of Thüringer.

While Vardar cruised into the main round as the only team not losing any points, Thüringer had to wait for Sunday’s game between Larvik and FTC.

Only a Larvik defeat would send the current number one in the German Bundesliga on to the next round.

Larvik had arranged for an unexpected gift last weekend, winning 25:22 on the road against Thüringer HC.

This meant that all the Norwegian record champion needed was a draw against FTC after Thüringer´s 29:21 defeat in Skopje.

As the match at Boligmappe Arena turned out, however, it was obvious that any anxiety – if there was any – by Thüringer was unfounded.

From the start, it was clear that Larvik did not stand a chance against a Hungarian team that had something at stake as well.

A draw meant FTC taking one less point to the main round, not to mention the effects of a defeat.  In short, a determined FTC team took complete control from the start.

Larvik gained a bit of hope, when they reduced a 3:7 deficit to 7:8, but soon thereafter FTC went ahead 15:7 removing any doubts regarding the outcome of this match.

Soon a nine-goal lead increased to 11 in the second half and while some may have asked why Larvik did not try playing seven-against-six in such must-win game, coach Tor Odvar Moen´s would not consider the move.  The difference in quality between the two teams was too big – certainly on this Sunday.

Stakes were set before the start of the match at Moraca arena, in Podgorica.

A victory or a draw would send the Montenegrin host to the main round for the ninth time in a row.  And a Vipers win would send the Norwegian Champions League debutants to the next round.

Characterizing the two halves of the match as “night and day” may be cliché but the comparison fits the game perfectly.

Vipers stunned their opponents completely, playing seven-against-six from the start – a sensible step in a match that the Norwegians had to win.

Even the tactical genius, Dragan Adzic, needed an entire half to figure out what to do against this bold tactical move by his adversary Kenneth Gabrielsen.

In the meantime, Vipers were well on their way to decide the matter already before half time.  The visitors had the game under complete control, especially right back Linn Jørum Sulland was firing on all cylinders.

Vipers were leading all the way during the first 30 minutes, including a four-goal advantage at 11:7 – it was the biggest margin of difference.

But with the beginning of the second half, the game turned.  Within two minutes, the Norwegian lead became history and was never regained.

Instead, Buducnost took over the initiative and dominated the rest of the affair.  Vipers simply disappeared from the match, as Buducnost went from 15:15 to 22:16.  A few Norwegian goals in the final minutes were only of cosmetic value.

Throughout the group phase, Adzic has been downplaying the strength of his young team but he has done tremendous development work in a very short time already.  It certainly showed in the match against Vipers.

After winning all of their three home games, Buducnost enter Group 2 of the main round with four points. Whereas, Vipers will have come to realize that their maiden voyage in the Champions League was a disappointment.

Add to it Larvik´s defeat against FTC and Norway will be without representation in the main round for the first time in eight years.

Surprise of the Group Phase

At least yours truly has been caught by surprise by the rapid development of this young Buducnost team, taking four points with them to the main round.

It will be really interesting to see how much further this talented squad can go, as they did not end up in the toughest one of the two groups.  A quarter-final may not be out of reach.

The Danish Champions League debutants finest hour was their sensational 25:22 win at home against CSM in round three.

The victory helped the reigning Danish champions to a surprising second place in Group A as did their 26:24 win against Krim in a close and hard fought match in the last round.  The success is also testament to a mental strength which not necessarily common for a Champions League debutant.

Disappointment of the Group Phase

We had every right to expect more from the “new” Norwegian handball powerhouse than what we saw in the group phase.

With Katrine Lunde in goal, her twin sister Kristine on the playmaker position and with back court players of the caliber of Emilie Hegh Arntzen and Linn Jørum Sulland, Vipers should have been able to do better, not to mention the quality shooting stars such as Malin Aune on right wing or Jeanette Kristiansen.

The way their first Champions League adventure turned out must be somewhat of a blow to the ambitious team from the south of Norway.

Following the group phase, the main round groups shape up as follows:

The Champions League Main – to be continued in 2018!