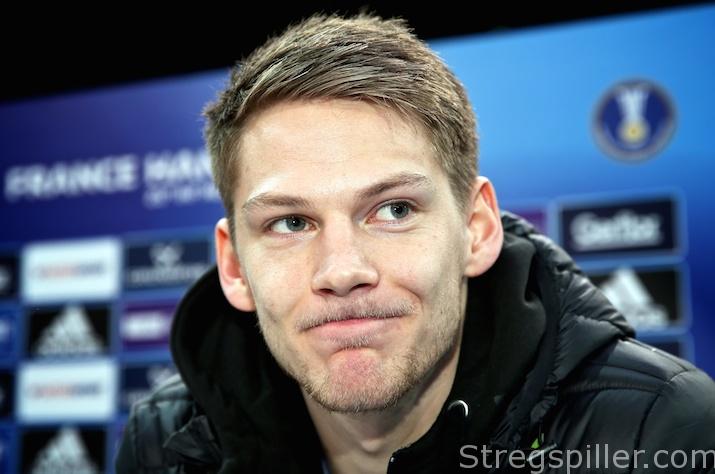 “I feel no need to be number one”

FEATURE – Torbjørn Bergerud and Norway’s national team coach, Christian Berge, find the move of the 23-year-old goalkeeper to Flensburg in 2018 to be a perfect next step in Bergerud´s career. Surprisingly, he does not see himself as the first-choice keeper in his new club.

SG Flensburg-Handewitt found a perfect solution dealing with some of their upcoming goalkeeping issues. Last week, the North German club signed Norwegian international Torbjørn Bergerud on a three contract as of next summer.

Bergerud seems to be an absolutely perfect replacement to either Mattias Andersson who will be ending his career after this season, or Kevin Møller who already announced to join FC Barcelona.

It’s also a good deal for Bergerud´s current club, Danish TTH Holstebro. The Danes will receive a substantial, though undisclosed sum for letting their star keeper go, one year before the expiration of his current contract.

According to Bergerud it all makes sense, although he had several offers from other top clubs to choose from, following stellar performances in the Norwegian national team, especially during the 2017 World Championship in France.

“Flensburg appeared to be a natural choice for me.

“I got a very good impression of the club, when I visited them before we started negotiations.  Furthermore, I am rather crazy about the fantastic atmosphere they always have when playing at home.

“The fans are really behind their team all the way,” explains Torbjørn Bergerud who will be joining Flensburg from the start of next season after two years in the Danish league.

He admits having consulted with national team coach, Christian Berge, before making his decision, and Berge who had a career as playmaker in Flensburg could only recommend the club, although he did not try to convince Bergerud.

“Christian had only good things to say about Flensburg, but he emphasized that the decision would be my own,” says Bergerud, whose words are echoed by Berge.

“It will be good for Torbjørn, and by extension for the national team, when he joins a bigger club, in a bigger league.

“I think Flensburg is a good choice for him – of course, I could only tell him good things based on my own time there.  But I also made it clear to him that the choice would have to be his own. I am happy about his decision, of course.

“I am in no doubt that Torbjørn can develop a great deal in Flensburg,” Christian Berge tells stregspiller.com.

Right now, it is a bit unclear what kind of Flensburg team Torbjørn Bergerud will be joining, next year.

Already this season, the squad will look quite different compared to the previous two.

Experienced players like Johan Jakobsson and Anders Eggert have left, and young, newcomers such as Magnus Rød and Simon Jeppson have yet to prove themselves.  It won’t be much different next summer.

As mentioned, both goalkeepers will be leaving, and other important players like Kentin Mahé and Thomas Mogensen will be gone as well.  It does not worry Bergerud a bit.

“I am sure that Flensburg will still be at the top of the Bundesliga when I join.

“Of course, it is difficult to predict what the team will look like in a year, when I join them.  It also depends a lot on how the new players will perform, but I am sure I will be playing in a top team,” a confident Torbjørn Bergerud assures stregspiller.com.

No need to be number one

One of the remaining question marks is who his partner in goal will be in a year from today.

“Of course, I cannot expect to play 60 minutes in every match when I join a team of Flensburg´s quality, and less can do for me.

“I hope the other goalkeeper will be someone more experienced than me – someone I can learn from and spar with.

“I do not need to be number one.  And I do not have to be the first-choice keeper or even be on completely equal terms with my partner in goal.

“For my development it would be better to share the goal with a seasoned guy, as I am still a relatively inexperienced goalkeeper,” says Bergerud.

“I have tried to pick up bits and pieces from several goalkeepers to find out what I could use in my own game, but I have never looked up to anyone in particular for inspiration,” he says.

Used to success with Norway

While his career in Holstebro has not been showered with success, he is growing used to positive results with Norway’s national team.

“It is a bit difficult for me to explain the sudden success of our national team, as I was not part of the squad during the less successful times.

“However, I do find that we have the right combination of experienced players and ambitious young talents.

“A player like Bjarte Myrhol, who is outstanding in every way, means a lot to the team, and with him and other experienced guys, we have plenty of talented, young players.

“Therefore, I do not think that we landed just a couple of lucky punches, when Norway reached the semi-final in 2016 and the final this year. I think we are a team you will have to watch out for.

“Of course, we cannot expect to reach the semi-final in every major tournament, but I am sure we will have it as a goal in the future,” says Torbjørn Bergerud – a very talented goalkeeper they can look forward to in Flensburg.