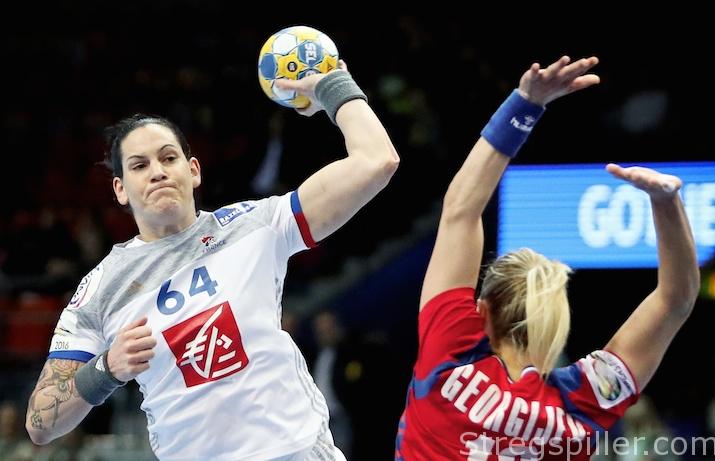 “I feel no pressure”

INTERVIEW – Alexandra Lacrabere feels comfortable about elevated expectation level at HC Vardar, where she is playing her first season.

Experiencing her first FINAL4 would mean a lot to her, she admits.

It is not secret that demands are high at Skopje’s, HC Vardar.

Reaching the FINAL4 of the Champions League – preferably on both, the men’s and women’s side – defines the season of the ambitious club from the Macedonian capital.

Furthermore, it is expected that the women’s team will do better than third place, a ranking they achieved attending the three previous FINAL4 events. To Alexandra Lacrabere, who joined the club from OGC Nice before this season, such high expectations are just fine.

“I feel no pressure.

“I know what I am here for, and we are many good players to do the job and live up to the expectations, which I find totally in order considering how strong of a team we are,” she tells stregspiller.com.

Vardar are close to CSM Bucuresti, when it comes to the frequency of changing head coaches, still, Lacrabere likes her new life in Skopje.

“Vardar is just great for me, as I can live out my ambitions here.

“I like the city and the squad, and it is an advantage that I am not the only French player here (goalkeeper Amandine Leynaud is the other, ed.) and that we are a team of many nationalities aiming for the same goal,” says the 29-year-old French international.

Not new to the playmaker position

Right now, she and her Vardar teammates find themselves between two matches in their Champions League quarter-final tie with FC Midtjylland.

Vardar won the first leg in Denmark (28:26) but were holding a considerably larger margin for great parts of the match.

“We lost a bit of our focus in the second half, while Sabine Englert (FC Midtjylland´s goalkeeper, ed.) Improved, and so did their shooters,” explains Alexandra Lacrabere who normally occupies the right-back position. But against Midtjylland she appeared as playmaker for 44 minutes in Sunday’s match.

“Being playmaker is not new to me, though.

“I have played the position in the French national team from time to time, and I have also practiced it here in Vardar, when Andrea Lekic is injured.

“As Andrea has just recovered, if was natural for me to fill in again.”

While occupying the playmaker position is not new to Lacrabere, it appeared to be a novelty for FC Midtjylland.

Left-handed playmakers are a rare sight in women’s handball. Lacrabere seemed to confuse Midtjylland’s defense, at least in the first half.

“It often confuse our opponents, when I fill in as playmaker, as left-handed center-backs are not seen that often. The team and I can benefit from it, and that is one of the reasons why I like to play the position.

“However, I also like it because it offers some other opportunities and challenges.

“Getting the chance to play both positions gives a nice variety,” she finds.

Still a job to be done

Vardar were leading by seven goals twice in the game in Denmark, this past weekend.

Still, with two goals up before of their home game against Midtjylland, Vardar are extremely close to the FINAL4 tournament in Budapest, at the beginning of May.

Yet, Alexandra Lacrabere hands in the politically correct answer, when I confront her with the obvious question.

“Of course, we are happy with our good position before the home game.

“We were not even expecting a two goal win in the first match.

“We were looking at a tough game, so of course. We are content with the result, but things can still go wrong in the return match.

“Midtjylland can – probably – play better over 60 minutes, than they did in the first game. So, we will all have to be absolutely focused in the second leg match as well.

“There is still a job that needs to be done, before we have reached the FINAL4,” she says.

She has played in quite a number of clubs during her career, after Spanish Bera Bera in 2008/09 and Russian Zvezda in 2012/13, Vardar is her third club outside France. Still, she has not experienced a FINAL4 as a player, yet.

“It is obvious that playing the FINAL4 will be a highlight of my career, and it was definitely one of my reasons joining Vardar.

There is an enthusiastic look in her eyes, when she says: “I really hope we make it to Budapest, and that I can help the team to do better than third place this time around!”