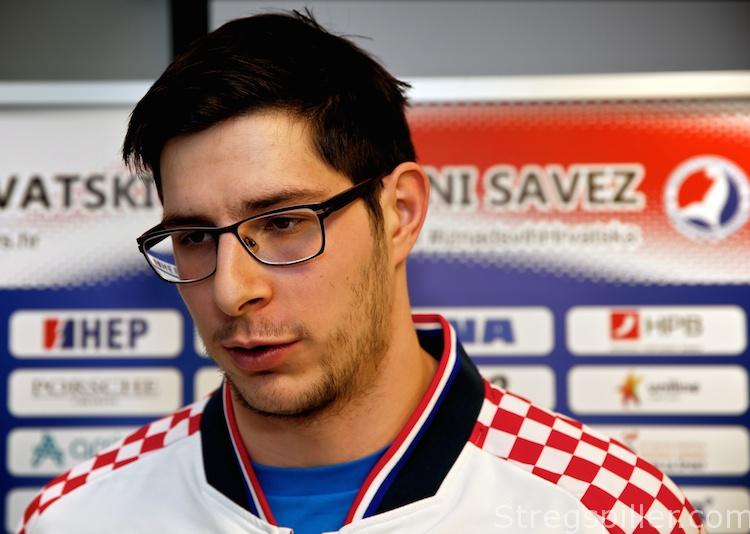 “We feel the the pressure but that’s normal”

INTERVIEW – Croatian left back, Marko Mamic, is happy about the massive support his team enjoys at the 2018 European championship on home ground. But he and his teammates also feel the pressure based on sky-high expectations of the many fans and supporters of Team Croatia.

Croatia have qualified for the main round of the European championship well in advance of the last match day in Group A, on Tuesday evening.

Due to the format of the competition, it does not mean that the host can take things easy. All teams that proceed to the next round carry their points along. Therefore Croatia´s last game in Split against Sweden is significant for both squads, as Sweden qualified as well.

Still, to Marko Mamic, having reached the main round already after two matches is an important achievement in itself.

“It means a lot, but we want to go to the next round with four points – for sure.

“Our job is not nearly done yet. We will definitely need a win against Sweden to take the maximum number of points before meeting the likes of France, probably Norway as well as the third team that will emerge from the other group – who ever it may be,” explains Marko Mamic.

Understandably, he is quite content with his team´s performances so far in the tournament, where Croatia defeated Serbia 32:22 and Iceland 29:22.

“We have played very well in our first two matches, I agree.

“But we must continue playing this way – stay calm and without taking any unnecessary risks.

“In our heads we must remain cool. This will be our key to success, I think,” says the 23-year-old backcourt player who earns his daily living at Polish PGE Vive Kielce.

Support from the crowd means a lot

The Croatian team enjoyed massive support from the crowd at Split’s Spaladium Arena in their first two matches.  A well-known fact – still it has warmed Marko Mamic´s heart even more this time.

“It is simply unbelievable to play in front of a crowd like the one here in Split.

“I must concede that the spectators are very clever, as they understand handball extremely well and they know when to cheer louder, when we need their support most.

No doubt his team will feel the support from the 11,000 at the Spaladium again, on Tuesday night, when Croatia face Sweden in the very last and important group match.

“I expect a very hard match, which is likely to remain close until the end, because Sweden will want those two points as well – it will be very tough and very tight.

“Therefore, once again, we will need to stay calm right from the beginning,” finds Mamic who is in no doubt about the key factor that will make the difference in the game against Sweden.

“Defense! Defense and running back when we lost the ball.

“The Swedes play a very, very fast handball – so it will be necessary for us to run back as quickly as possible.

The support for the Croatian side is enormous, but so are expectations.

Croatia enjoying home court advantage comes along with huge expectations of their most ardent supporters and Marko Mamic admits that he can feel the pressure.

“Of course, we feel the pressure, but that’s normal.

“When you play at home, everybody expects you to deliver some excellent results.

“In Croatia, we have a history of achieving good results, and now we play at home, so it is no wonder that everybody expects us to win the gold medal!

“Yes – it is a bit of a pressure, but it is the kind of pressure we can live with.”

The gold medal is something Croatia has never won at a European championship yet, but the 202 cm tall shooter from Kielce sees an opportunity this time around.

“I am sure we have the team that can win this time.

“It won’t be easy, of course. There are a lot of good teams in this competition.

“There may be up to eight teams, that can take the title and for us the gold medal is still six games away, but we hope to approach it step by step,” says Marko Mamic.