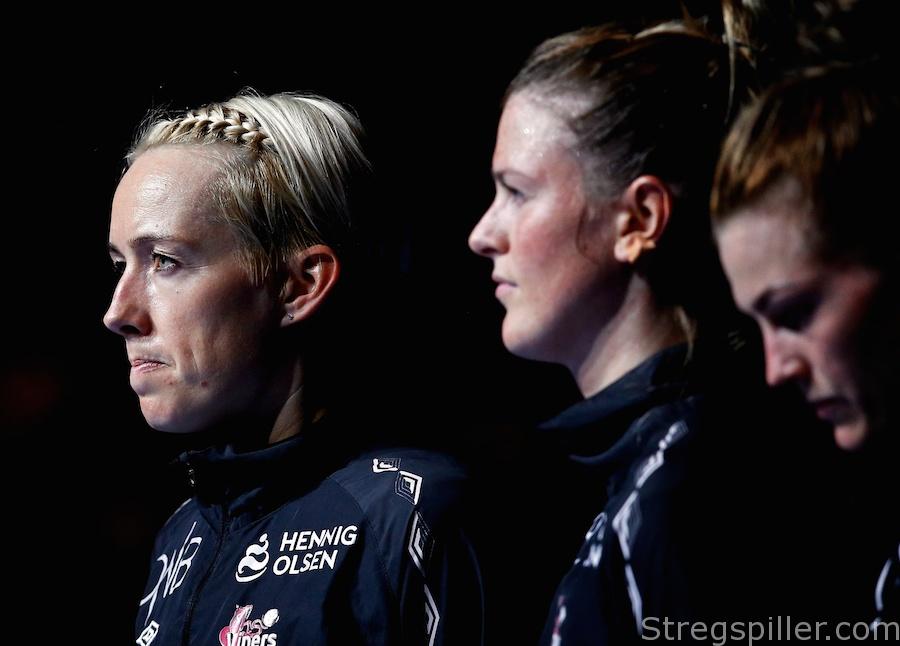 Although Rostov’s left wing, Kristina Kozhokar, was listed on the team sheet she did not play and neither did Polina Kuznetsova and Anna Vyakhireva.  All three key players for the Russian champions.

Vipers had arrived in full force except for Silje Waade, who is recovering from knee injury.

Vipers left the court with a seven goal victory, but the score did not reflect the roller-coaster ride both teams experienced in game one of the 2020/21 DELO EHF Champions League quarterfinals.

After a decent, yet hectic start the Norwegian champions went cold for the better part of eight minutes, but Rostov could not seize the opportunity as the team was lacking firepower from almost every position.

Midway through the half Kristiansand had regained their composure and began to pull away.  On the other side Rostov went ice cold unable to change the rhythm of the match.  Nothing worked while the guests clicked on all cylinders, outscoring the host 16:6 (10-30th minute).

The half time break did nothing to stop the momentum of Mork & Co. Five minutes back in the game, the Norwegians were leading by nine goals, forcing Rostov’s head coach, Per Johansson, to call his second time out earlier than wished for.

For whatever reason, this time it worked wonders, as Vipers took a more casual approach to the match, while turning over the ball on several occasions.

Yulia Managarova moved into the right back position and all of a sudden Rostov’s offense had regained some energy.  Coach Johansson’s team began to cut the deficit all the way to four goals before running out of steam.

In the closing minutes of the match, Henny Reistad took matters in her own hand and restored the seven goal margin almost single handedly.

Narrowing down the success of Kristiansand to the strong performance of Nora Mork, Henny Reistad and Heidi Loke would not do it justice.

Vipers did experience significant performance swings in both halves and Kathrine Lunde (31% saves) in goal was – once again – the pillar guaranteeing stability.  She kept her team in the game, when nothing worked on the other side of the pitch.

Rostov just did not have the options given the missing players (see above).  Especially, Anna Vyakhireva was dearly missed in the back court.  Add to it a sup par performance from the goal keeping duo (10% save rate) and the dilemma takes shape.

Given the long break since the last Champions League match, Kristiansand appeared to be sharp and fresh and today’s result does not bode well for Rostov and the second quarterfinal game on Sunday.

More players other than Zaadi, Lagerquist and Bobrovnikova will have to step up, on both ends of the pitch, to book a return trip to the DELO EHF FINAL4, in May.  A difficult task which did not get any easier today.

“Yes – the result today is better than a draw or loss.  I am very happy for this score. Tomorrow, is a new game and Rostov will come back strong.  These days we are not used to play in front of spectators, but it gave us a lot of energy.  Rostov’s fans are very noisy and for us players on the court it was very enjoyable.  I have been looking forward to return to Rostov – every time I come here I am happy.  It felt very good today.”

“In the first half our defense did not work at all.  They (Vipers ed.) scored from the wings, the line and the back and we got very insecure and forgot our tactic how we wanted to play.  In the second half we tried to come back and start the game over.  We did some good things, but I don’t know if we got stressed, in the end we were not sharp enough.  They scored easy goals from the back and we continued to made mistakes and we missed out on our chances in the attack – Vipers is too good of a team and they punished us.  We have to evaluate this game and look what did and what didn’t work, focus on the good things and take that with us to the game tomorrow.

“It will be all about rebuilding our defense, be sharp in attack, score on our chances, but we have to focus on our defense, tomorrow.”