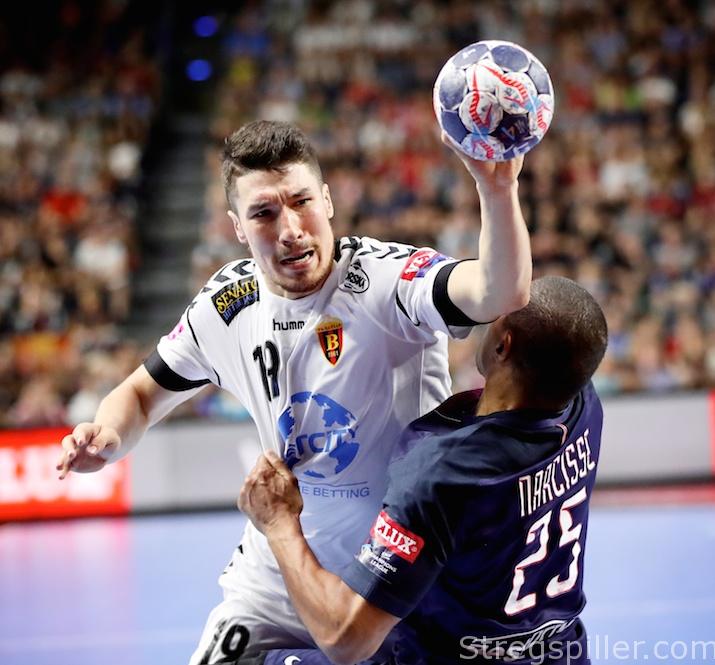 Ivan Cupic: “I was sure to score”

The game came down to the wire as Vardar had the ball with seven seconds to go. Like in the semis against Barcelona, the Macedonians took profit and Ivan Cupic scored the most important goal of the weekend, crowning his new team the European club champion while personally defending the title he had already won last year with Kielce.

Congratulations, Ivan, on winning the Champions League once again and scoring the deciding goal, it must be a fantastic feeling?

IC: It’s outstanding!!! I know how hard it was to win it with Kielce and this one was the same – extremely hard. You have to work ten months as a team. Today, and not only today, yesterday as well, we showed character, team spirit… Tactics are not important in these moments. If you play like a team you get it back in the end. We were a bit lucky with our last two, or three goals, but when I look back at our season, we won our group, defeated Barcelona and Paris and Veszprem in the SEHA League, I have to say we deserve this success. Now, it’s time to party and celebrate, but next year it’s going to be the same hard work – as usual.

Did the coach have a plan for you in the last seven seconds or did it just happen that you got the chance to score?

IC: Yes, it was planned exactly like that, that I would get the shot. Luka Cindrić and Alex Dujshebaev made some nice passes, but Alex didn’t have a chance to shoot, so he passed to me and I scored. Finally, we made a good choice.

Were you stressed when you scored?

IC: No, no, you can’t show any stress. You can’t think what’s going to happen. You’re concentrated and wait for the pass. This time the pass came to me. As I saw nobody in front of me, I decided to score – I was 100 percent sure it would be a goal.

How will you celebrate today?

IC: Like always! There is a time when you must work and then there are days to party. And today is that day – not only for us, but also for all the fans, Macedonia and the club. We played four, five years in the Champions League and today we get the first trophy. I’m very happy and I am honored to be one of the players who won the Champions League today.

Was defending the title on your mind?

IC: Ha, ha, you never know such a thing, but you always hope for it.  In Kielce, I already won everything and I felt I needed a change. I thought a lot about  what I should do.  I talked to my manager and this opportunity, playing in Vardar was very tempting for me. It was extremely good choice for me, in hindsight.

At the beginning of the season, we played very good handball.  We have an amazing team, but I still consider Kielce my second home.  I was there for four years and Poland and Kielce are in my heart.  But in the end, I am a handball player and this is my job. So, I have to go where I can do my best.  I hope to see my friends from Kielce next year here in Cologne.

Alex Dujshebaev: “It was totally crazy!”

You never know how often you can win the Champions League title. So, Vardar’s Alex Dujshebaev was enjoying it to the full extent. He was still screaming and overjoyed while answering the questions of the many journalists.

Please take us through the last seven seconds of the game.

AD: It was crazy.  We were winning by one goal, when we had ten seconds left before Narcisse scored. We then had only seven seconds remaining to score a goal. They were one player down, so we knew we had to do something –  one shot and we had to score. And we did it.  Now we are the champions of Europe – amazing.

Did you talk to your father?

AD: Of course, I spoke with him before the match. He only said we have to play with all our heart – like we played today. We must play like a team, it’s not important who scores the most goals, only victory is important, today.

Did you talk to him after the game?

At least the title remains within the family.

AD: Of course, and I can tell you, it’s a dream coming true. It was my last match with Vardar and I wanted to leave on a high note.

Stole Stoilov: “I told you so”

Humble, funny, proud – and a true winner! Vardar’s Stole Stoilov is a great guy to talk to. Obviously he was in a great mood after his team had stunned star-studded Paris Saint-Germain with a last-second goal by Ivan Cupic to win the 2017 EHF Champions League.

It was great talking to you on Friday, it was even better to talk to you yesterday, so it’s a must to talk to you today. Please let us know what you’re experiencing right now!

SS: I feel overwhelmed. This is the crowning of my career. Some of us have never been to the Final 4, others like Joan Canellas have been here, but have never won it. This is the best thing in handball. So, I think I told you two days ago that all four teams have a chance to win it and we did it. We deserved to win yesterday and we deserved to win today. I’m very proud of my guys, they showed courage and character, not only in these two games, but over the course of the four years that it took us to get here.

What made the difference when you take a look at the whole season?

SS: Qualifying for the Final 4. That’s the most difficult thing to do. Because once you’re here it’s only one game to get into the final and only one more game to win it.

SS: Yeah, but it’s like that. The system is like that. Well, we had some luck, we had courage, we had a good defense, a great goalkeeper and when you put it all together, you’re a champion!

Is this the biggest day in Macedonian sports history?

Can you imagine what’s going on in Skopje right now?

SS: Haha, yes, it’s delirium! This is the biggest thing in Macedonia, right now. I hope we made everybody happy.

You’re a quite happy person yourself – it should be a good party!

SS: First party, then the flight back home, then party again!