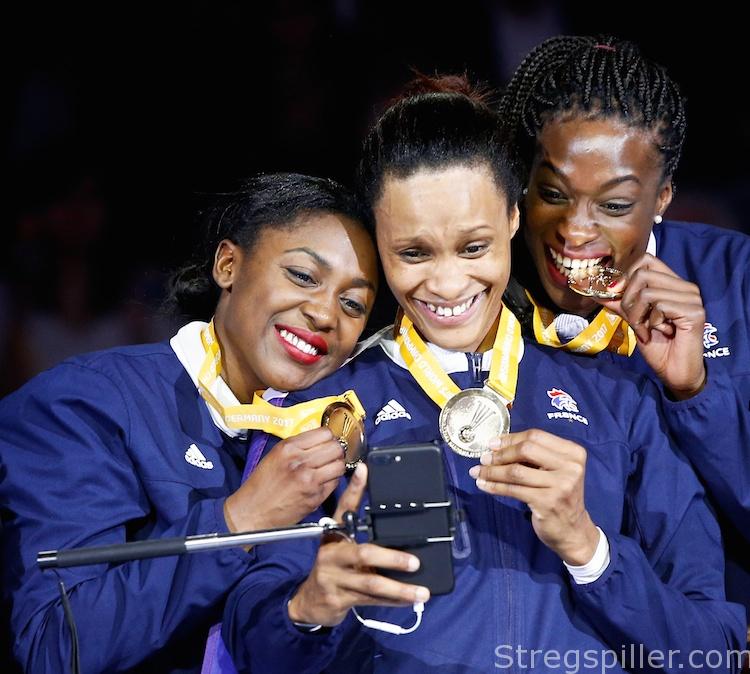 “Finally, we beat Norway at the right time”

France stunned defending champion Norway winning the world title, beating the Scandinavians by a final score of 23-21 in Hamburg, on Sunday afternoon. They key for success was a plan worked out before the start of the tournament, relying on the whole roster, to save energy for the last day of the competition. The plan worked out, as a smiling Allison Pineau confirmed right after the final whistle.

First of all congratulations to winning the World championship, Allison.  I saw you doing other interviews, you looked so serious, what’s going on?

AP: No, no, no! I’m not serious, it’s just very difficult to realize that we are world champions.  We have waited so long for it. I took us 14 years… I don’t know, I’m actually very tired, and at the same time very excited about it.  Finally, we beat Norway at the right time.

I have seen many games, but this defensive performance tonight was just fantastic, maybe one of the best in the past ten years?

AP: Well, I wouldn’t say in the last ten years, but we are known as a team which has the best defense in the world.  Everybody knows it’s our strength. But today we really needed to show more, we had to show that this is our idea of a team. Of course, we knew that they would have some problems against us. The plan was to play in the same way as usual, but to add a little bit to it and see if it works or not. It worked, so I guess the tactic was good.

I assume that you as a player get a feeling in the first five or ten minutes of a game if you are able to win it or not.  I sensed the Norway’s players saw right away it will be very hard to score against you?  What are your thoughts?

AP: Yes, I think so. They missed two or three shots before they scored their first goal. But if they didn’t knew it would be like this, then it’s their problem. You can check the statistics, but I think we conceded more than 23, 24 goals only against Slovenia.  All the other teams had a tough time scoring against us.

Do you think the rotation within your team was the key getting to the final in top shape?

AP: That was the plan before the tournament started. We said we will do it like this and we agreed to it.  We wanted to be fresh for the semi-final and the final and that’s all we all focused on.  Early on, we accepted this plan, because if you approach the competition like this, then you have to take care of every single player.  This was the plan and it worked well.

What do you say about your coach, Olivier Krumbholz, who came back after taking a break – he did an amazing job?

AP: We owe him so much.  He also changed a lot, in the way he coaches.  Now, he talks with the players more frequently, especially with the experienced players of the team.  He also integrated some young players into the team – our system works quite well at the moment.  I think we just have to keep going this way.

By the way, you said you are tired. Do you still have enough power to party?

AP: Don’t worry – for “desert” I always have time!