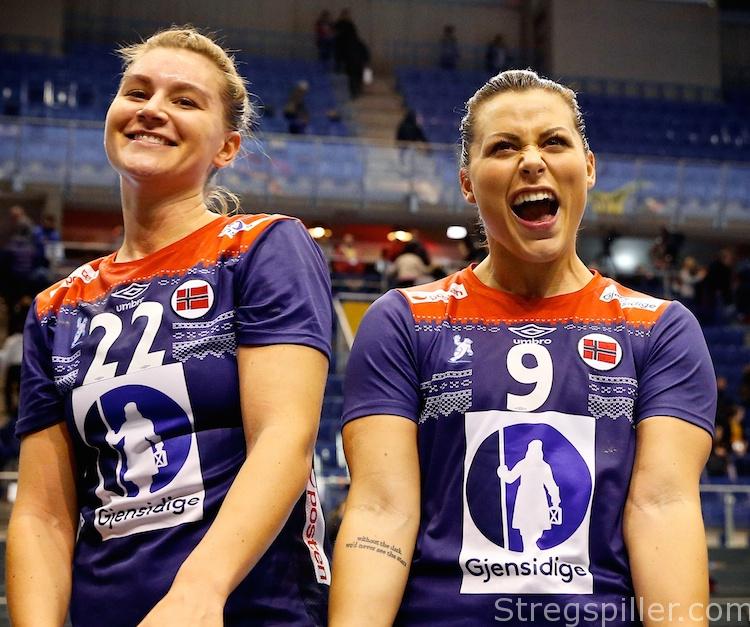 “Finally, we made our team function”

INTERVIEW – CSM Bucuresti´s Norwegian right back, Amanda Kurtovic, confirms that it has taken some time to get all the new players integrated in the team, including her.

In this exclusive interview with stregspiller.com, she also explains what the transfer from Larvik to the Romanian powerhouse has meant to her personally.

“We really had an inconsistent first half of this season, mainly because of the many new players in our team.

“After Christmas, however, we finally managed to make our team function – I think.”

Those were the words of Amanda Kurtovic following CSM Bucuresti´s surprisingly clear 28:22 win at home against Györ in their first match of the Champions League main round.

“Of course, Györ were missing a couple of their best players (Eduarda Amorim and Anja Althaus, ed.) but it was also a very good performance from us, as we really benefit from having two world class players in each position, Amanda Kurtovic tells stregspiller.com.

The 26-year-old right back was her team´s highest scoring player in the match with eight goals.

“I just felt that things turned out right for me and I was successful with my shots from the beginning.  Thereafter, it was just a question of keep on going,” explains the Norwegian international, who joined CSM before this season.

“Of course, moving here from Larvik and joining one the most ambitious clubs in the world was a big change, especially as I am used to having my family and friends close to me, as in Larvik.

“It has certainly helped me that my teammate from Larvik, Marit Malm Frafjord, made the move at the same time.

“Furthermore, it’s also great that we are so many Scandinavians in the team.

“It is always good to have some friends around you can trust and talk to.

“That made me feel secure and it was rather easy for me to settle in.

“With regards to my game, I can really feel that I have become a better handball player after my transfer.

“I have developed a great deal this season already, but how could it not be, when you train and play with world class players on a daily basis,” says Amanda Kurtovic who is enthusiastic about the team´s Danish head coach, Helle Thomsen.

“Helle is a very good and dedicated coach. She cares a lot about every little detail in the game, and she is very good at instructing and at coaching us.

“Of course, she does set some ambitious goals, but that’s as it should be. We are all players at a very high level, so she has every right to expect a lot from us.  Personally, I welcome her demands,” states Amanda Kurtovic.

Given the quality of CSM’s roster, the first objective of the season is reaching the FINAL4, in Budapest for a third year in succession.

“Of course, this is our main objective, but it’s still far away, and we have a long way to go.

“In fact, I do not think we should talk too much about the FINAL4 yet, as there are so many steps we have yet to take, although I admit we’re off to the best start to the main round we could dream of.

“Still, I think we have to take it step by step,” she says.

In the 2017/18 Champions League, Amanda Kurtovic, will face many of her teammates on the Norwegian national team like Kari Aalvik Grimsbø, Nora Nørk and Stine Bredal Oftedal (all Györ) or Veronica Kristiansen, Tonje Løseth and Hilde Fauske (FC Midtjylland).

“Playing against teammates of the national team is really no big deal.

“These days, top level players meet each other so often, under so many different circumstances there really is nothing special about it. In this respect, such games are like any other,” says Amanda Kurtovic who is very well aware that CSM lost 24:21 away to Midtjylland last season.

She recognizes that the Danes have a way of defeating favorites in their small IBF Arena, in Ikast.  Apart from CSM, Györ and Rostov-Don left points in Central Jutland,last season.

“That is just one reason why we all expect a tough match against Midtjylland.

“They have good players on all positions and as their results demonstrate, they have a very strong home ground.

“We are going to prepare as thoroughly for this match, as we did for the Györ game, and we will need to be just as focused.

“This is just one example of what I meant by saying that we have to take it step by step.

“The step in Midtjylland may be hard enough to take,” finds Amanda Kurtovic.