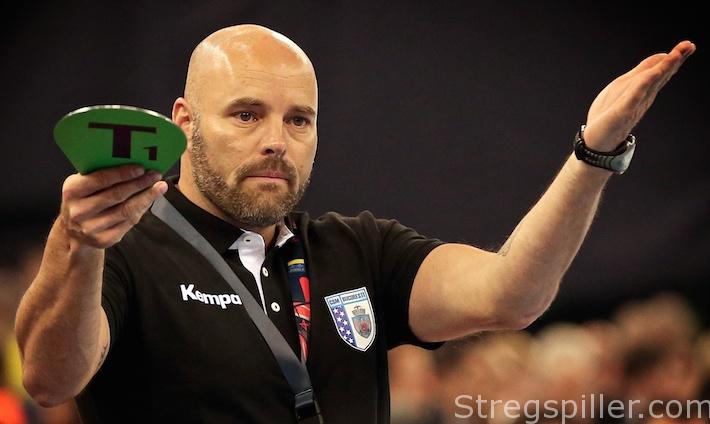 PORTRAIT – He used to be known only as the older brother of former Danish international Lars Rasmussen.  Lately, however, the handball world has learned who Kim Rasmussen really is, and the Champions League triumph on Sunday with CSM Bucharest emphasized his status as one of the very best coaches in women´s handball today.

At the press conference after CSM Bucuresti´s stunning 29:26 win against Gyor in the Women´s Champions League final, CSM coach Kim Rasmussen was asked, if he should have been among the top five coaches that were nominated as “Best Coach” of the season in women´s handball, in Europe.

“No”, he said. “  “In March, when the nominations were made, we at CSM had not accomplished anything in particular!”

Of course, he was right but if the EHF had waited another month or so to finalize the nominations, Rasmussen undoubtedly would have made the short list of candidates.

Winning the Champions League with CSM was obviously Kim Rasmussen´s masterpiece as a coach, so far.  However, for quite some time he has deserved more credit than he has received up to this point.

His achievement with the Polish national team over the past few years is testament to it.  When he took over as national women´s coach in Poland, in the summer of 2010, he assumed responsibility for a squad that had not qualified for any major tournament for three years, not to speak of getting anywhere near a top spot at either a European- or a World Championship.

Kim Rasmussen changed that by taking Poland to the semi-finals of the World Championship in 2013 as well as in 2015.

It’s easy say that the Polish handball federation took a chance on a coach who was unknown internationally, and who was coaching a team at the bottom of the Danish league – Roskilde – at the time.  Taking the chance paid off, however.

Still, in Denmark, Rasmussen was only known as the older brother of former Danish international Lars Rasmussen – and to some as the oldest son of former president of the Danish Handball Federation Per Rasmussen.

This categorization was emphasized clearly in a Danish newspaper headline back in 2013, when Kim Rasmussen´s Polish crew qualified for the semi-final of the World Championship in Serbia – it read: “Sensational performance by ´Little Lars´ older brother.”

However, even people in his homeland soon learnt who Kim Rasmussen really is.  At the 2015 World Championship in Denmark, he repeated his achievement from Serbia and took his Polish team to another semi-final. And after the Champions League FINAL4 this past weekend, no one is in doubt any longer, what Kim Rasmussen can do with a team when given the opportunity.

But what is it that has made him so successful in just six short years? His tactical skill set is one obvious part of the explanation. His talents as “chess player” were clearly demonstrated in the 2016 Champions League quarter-finals against Rostov-Don.

There was little doubt, that Rostov´s Danish coach Jan Leslie knew who Kim Rasmussen was and what he was capable of.

Still, Rasmussen managed to get the better end of his fellow countryman. It already raised more than one eyebrow around “Handball Europe”, when CSM managed to defeat Rostov for the first time in their Champions League campaign, winning the first leg at home 26:25.

Still, everyone – with exception of Kim Rasmussen and his squad – expected the Russian team to turn things around in the second leg between the two Champions League debutants.

But to the surprise of many, CSM managed to take another one goal-win (29:28); once again Rasmussen´s ability to make his players believe and follow his tactics had paid off.

And he did at the FINAL4 tournament in Budapest, where Kim Rasmussen´s coaching skills were on display once again.

He is just very good at showing all his players that he fully trusts them and having the guts to use his entire squad, no matter how close the game is.  This faith in his players can’t be overemphasized.

No one will be able to convince me that it was it was a coincidence that Linnea Torstensson took the last shot in the dying seconds of the Champions League final against Gyor.  Torstensson took the crucial shot because she felt that her coach believes in her. That’s what puts confidence into players.

However, Kim Rasmussen is also good for other surprises every now and then.

An obvious example was the substitution of an otherwise brilliant Jelena Grubisic in goal with Oliveira De Pessoa during the last minutes of the Champions League final.  At first, it seemed like a crazy idea to bench Grubisic , who was awarded as the “Most Valuable Player” of the entire FINAL4.  But once again, Rasmussen was proven right.

De Pessoa took to the court and performed several match deciding saves.  Her parades contributed to earning CSM that extra time, which led to the ultimate triumph during the penalty shoot-out.

It’s fair to say, that not many coaches would have dared to take this step in this particular situation.

It might seem, as if Kim Rasmussen´s coaching career had been one long success story since he was “discovered” by the Polish handball federation back in 2010.  As most will remember, it was not.

In between his career stops, there was the intermezzo in Vardar.  After less than a month on the job as “consultant” to Vardar´s women´s team, Rasmussen was sacked before the end of January 2015.

What better way to pay back the club that terminated the “consultancy”, by beating them as decisively, as Rasmussen´s CSM did in the Champions League semi-final.  After the 27:21 win, he claimed that there were no hard feelings on his side towards Vardar anymore.

You don’t fool me, Kim.  The smirk on your face, while roaming the sideline, as the win was becoming a reality, was a not so subtle hint that you enjoyed this particular moment for more than one reason.

And what an unbelievable triumph it all became.  This FINAL4 was not just about turning the apparent underdog of the competition into Champions League winners. In fact, Kim Rasmussen did not even have a whole season to prepare his team for the task on hand.

The 2015/16 season was already well underway, when he replaced fellow Dane, Mette Klit, at the ambitious Romanian club.

He joined a bit of a “mad house” – where wages were arriving too late or not arriving at all, and where there was doubt what players were available and who were not.  The sum of these circumstances, make the achievement of Kim Rasmussen and his team so much more imposing.

Hopefully, CSM – the team is owned and financed by the city of Bucharest – will come up with a solid bonus for Kim Rasmussen for what he has done for the club.

He will be missed in the Romanian capital when he moves to…  To be continued!