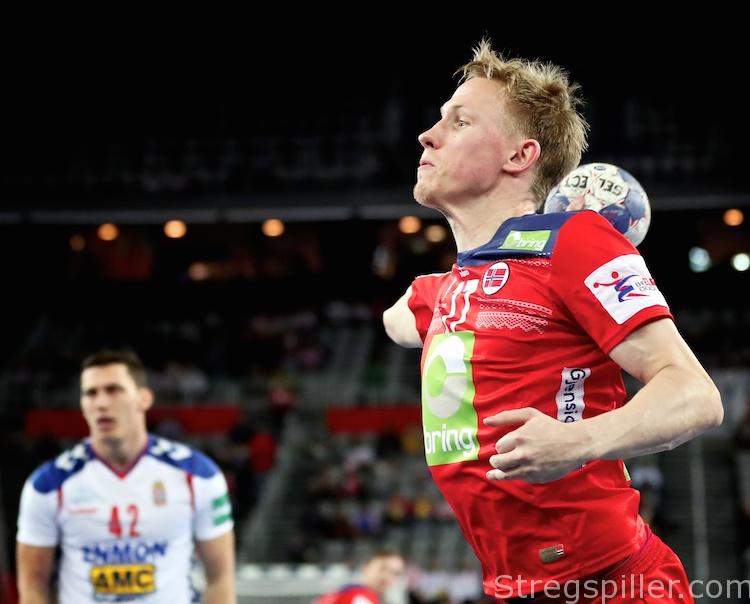 “Fine with us to be considered favorites”

INTERVIEW – Norway’s left wing Magnus Jøndal has no problem with his team mentioned among the favorites to lift the trophy at the EHF 2018 European championship.

“It only shows that others think that we are a good team, and we appreciate the compliment!” he tells stregspiller.com.

After reaching the semi-final at the EHF EURO 2016 in Poland and the final at the 2017 World Championship, in France, Norway can no longer assume the role of underdogs.

Pundits rate Norway as one of the favorites to take the title at the ongoing European championship in Croatia – at the very least take a medal. So far, their performance in the tournament, have only strengthened the argument.

“That’s just fine with us.

“It just emphasizes that people consider us as a good team, and I think we deserve the credit.

“It’s not pressure to us. We take it as a compliment instead and we live very well with it,” says Magnus Jøndal.

The left wing, who will be turning 30 in a few weeks, has been one of the key players explaining Norway’s success at the championship, so far. He is one of their most important players running fast breaks, a weapon Norway’s game relies on a great deal.

In the Scandinavian´s most recent match – a 32:27 main round win against Serbia – it took them some time to overcome Serbia as the first half ended 17:17, after team from the Balkan nation had caught up with a couple of three-goal deficits.

“We played a poor first half, but after a good talk at half time, we stepped it up considerably in the second half.

“Moreover, we managed to wear them out because of our pace. We ran a lot throughout the match, so they got tired towards the end. We also made it more difficult for them while improving our defense, in particular,” sounds the analysis of Magnus Jøndal who currently plays at Danish GOG, but who will continue his career with SG Flensburg-Handewitt from next season on.

Understandably, Magnus Jøndal is quite content with his and his teammates performance at this championship, where Norway recorded four clear victories and only suffered a narrow and unfortunate, one-goal defeat, against France.

“I definitely think we have played okay, so far.

The next assignment for Jøndal and Norway will be the Croatian host who started the tournament in convincing style, but since then have shown considerable weaknesses in their two latest games in Split and Zagreb.

15,000 spectators at Arena Zagreb may support Croatia, but that does not concern Magnus Jøndal.

“We are very much looking forward to this match.

“Games like this one are always great fun to play – in front of a large, fanatic crowd who is cheering and shouting against you, even more so when you play well against their darlings.”

“To us this kind of an atmosphere serves as additional motivation rather than pressure.

“We have played well in such matches before. For instance, when we played against Poland at the European championship two years ago, in Poland, it was great fun too. It’s simply cool to play such matches,” says Jøndal who is also looking forward to Norway´s last main round encounter, where the eternal rival – Sweden – awaits.

Two more wins may be needed

“Playing against Sweden is always special, and these matches are always unpredictable.

“We realize that we will may well have to win all our main round matches in order to reach the semi-final, as it may take four more points to be certain.

“However, if you want to go all the way, you must be able to beat them all,” concludes Magnus Jøndal.