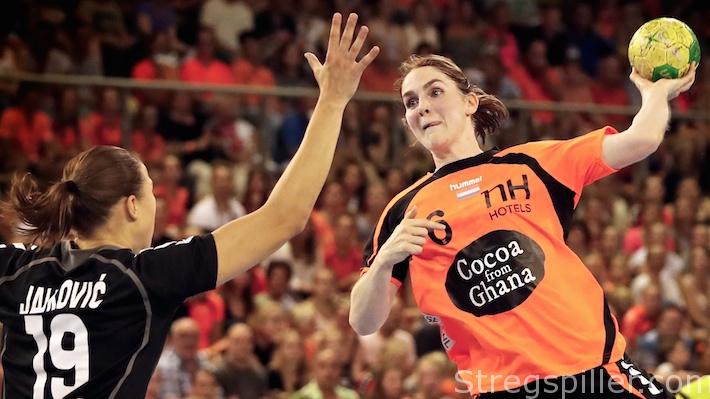 Five Rings – One Goal – The Women

The preliminary rounds of the Olympic handball tournament have been very entertaining, especially because of a number of unexpected results.  Sure, Brazil was going to be good, but probably not that good. Angola?!?  Did anyone expect Angola to make it to the next round?  Montenegro – very disappointing, while the Dutch team took a while to lose its nervousness.  Eight teams qualified for the quarterfinals, time to take a look at the matches set to be played on August 16th.

Any doubts Brazil will make it to the semi-finals?  Well, not if you like the hosts to go far,while keeping up the noise at Future Arena.

Pay attention to the Dutch, who will be the underdogs and free of any pressure, just like at the World Championship in December, when the team stormed into the final.  Nobody expects them to win at this point.  If they want to shock Brazil they need great goalkeeping from Jasmina Jankovic and Tess Wester, and a more efficient offense.  If Lois Abbingh finds her shooting range and if Danick Snelder doesn’t find herself on the bench too often, then the Netherlands can really make it.  Would I bet my money on them?  Not really.  Brazil will have an 80 percent chance of advancing.

What to make out of this one?  Spain was a runner-up at the 2014 EHF Euro and sometimes I ask myself how the hell they were able to go that far?  Since then the squad disappointed, but the addition of Alexandrina Barbosa will make the team so much better.  In Rio they were lucky to make it to the quarterfinals – yes, I’m quite critical of the Spaniards.  Something is missing – maybe goalkeeping, maybe more physical power, I’m not convinced yet.

France, on the other hand is not an impressive squad when crunch time arrives.  Yes, the French are so much better than finishing 7th and 5th.  In Denmark both teams faced each other in the round of 16 and France won a tight game 22-21.  Alison Pineau and Alexandra Lacrabere will have to carry their team, while somebody else has to step it up for Spain if they want to make it to the semis.  My money is on France in a nail biter, I give them a 60 percent chance of advancing.

Norway plays as they always do.  The first game is a bit of a struggle, but then they take total control.  They are in cruising mode. They dominate.  It doesn’t even look like they have to put a lot of energy into it, it’s just impressive. And who will ever stop Nora Mørk? Remember, she’s just 25 years old but she made the All-Star team at the last to major events and she will also make it in Rio.  She’s just unstoppable at the moment.

And although Sweden has a above-average defense, I can’t see them beating a team which fields Mørk and Heide Løke, arguably the best line-player in women’s handball history.  So does Sweden have a shot at beating Norway?

Only if the goalkeepers play the “game of their live” and almost everything must go wrong for the favorite.  I just can’t see it.  Maybe there will be times the game looks like it is close, but in reality it isn’t.  If I had a house, I’d bet on it.  Well, maybe just the garden, but still.  I give Norway a 95 percent chance of advancing.  And those 5 percent I give to Sweden are just in case I totally mess it up.

This one might be the biggest shocker of the whole handball competition.  No, it won’t.  You can sit down and relax. And if you’re based in Europe, then you can also go to bed early.  Russia will make sure that Angola doesn’t even come close to winning this one.  Russia seems to have found the perfect timing once again.  A rather young side led by veteran screamer – I mean coach, Evgeni Trefilov – will be just too much to handle for Angola.

It’s a big surprise that the Africans even made it to the quarterfinals – it’s a huge accomplishment.  Years ago victories against Romania and Montenegro wouldn’t have been possible.  Isabel Guialo and Natalia Maria Bernado will give their very best, but Russia is more experienced, playing on a high level, has more quality and depth to offer and should have won this by halftime.  As I did with Norway, I’d  wager a lot. I give Russia a 95 percent chance of advancing.