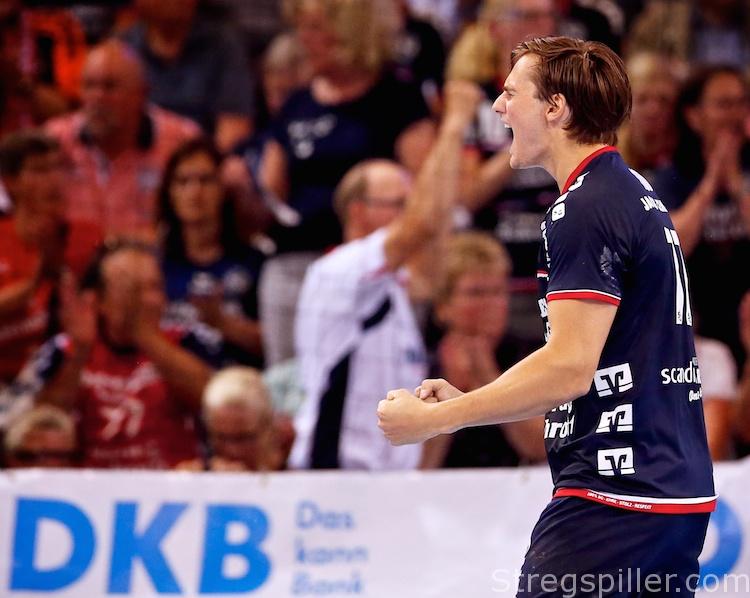 Men´s Champions League- Round of Last 16

stregspiller.com – MATCH OF THE WEEK REVIEW – SG Flensburg-Handewitt is the only German team competing in the VELUX EHF Champions League quarter-finals this season.

After Rhein-Neckar Löwen were eliminated by Nantes on Saturday, the German champion achieved a different result.

In fact, Flensburg decided the match in the first half already, as they went up by six goals before finishing the game with a 10-goal win.

Now, coach Machulla’s team can look forward to meeting Veszprém in the quarter-final.

Flensburg had returned with a 30:28 victory after visiting Brest last weekend.

Apart from 1:1, Karlsson & Co. were leading all the way against a Belarusian squad which did not do much to challenge a well prepared and well organized Flensburg team.

The team of head coach, Maik Machulla, literally decided the matter in the first half, as they dominated the match from the get go.

Flensburg took the initiative from the beginning, jumping to an early two-goal lead (3:1), while Gottfridsson made his presence felt, scoring four goals on four attempts.

Former Flensburg player Petar Djordjic did not add to his popularity after a confrontation with Holger Glandorf.

Aside of the altercation, Djordjic didn’t enjoy much success in the first 30 minutes and neither did the rest of his teammates, apart from goalkeeper Ivan Pesic, whose fine performance saved his team from trailing even further at the half.

Brest’s coach, Manuel Cadenas, kept searching for solutions but his team didn’t respond and two timeouts before the break did not help either.

A solid Flensburg defense organized by Tobias Karlsson were the basis for a convincing performance.

From 10:8, Flensburg quickly pulled away to a comfortable 14:8 half time score.  The team from Belarus were able to reduce a couple of three-goal deficits to one, but in the end there was nothing they could do.

Those who were hoping for some excitement in the 2nd half were disappointed.

While Cadenas kept trying, Flensburg’s coach, Machulla, held on to his starting lineup.

Holger Glandorf, Rasmus Lauge and Jim Gottfridsson in the backcourt, Lasse Svan and Hampus Wanne on the wings and Anders Zachariassen on the line continued where they left off before the break.

Brest´s offense did show some vital signs, as the two wing players, who were largely neglected in the first half, stepped up.

Still, it was far from enough to threaten Flensburg this evening.

As the match progressed, Brest’s players increasingly looked like a bunch of athletes who did not believe in their project anymore.

On the other side, Flensburg and their supporters had a party, although their defense lacked some concentration, it was more then compensated for at the other end of the pitch with some attractive handball and several spectacular goals.

With six minutes left to play, Hampus Wanne made it 27:17, before settling for a 10 goal margin.

For Brest the 2018/19 VELUX EHF Champions League is now finished, whereas Flensburg can think about a challenging quarter-final against Veszprém, at the end of April (1st leg) and early May (2nd leg).