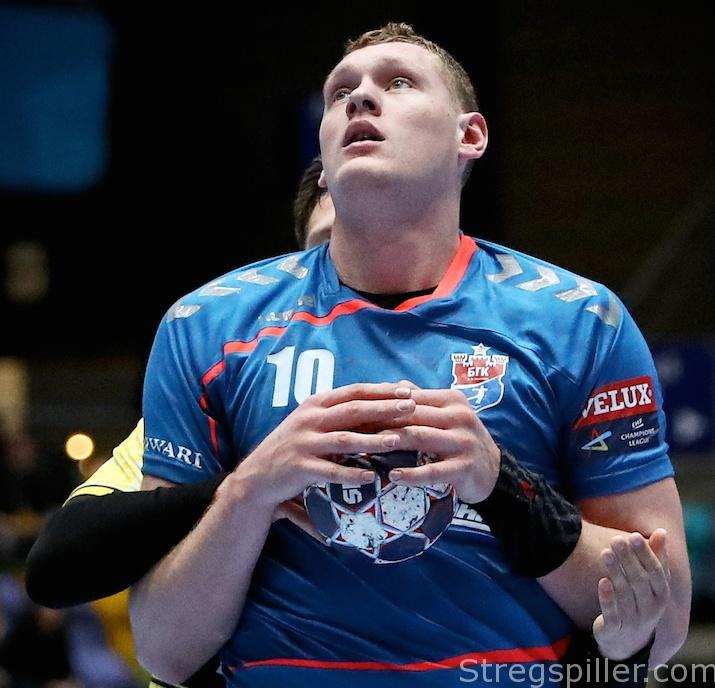 MATCH OF THE DAY – Flensburg surrendered a five-goal lead in the last 10 minutes in Belarus, but the Germans still landed a victory, which ought to be enough qualifying for the quarter-final.

One Bundesliga team already bit the dust in Brest this season. Rhein-Neckar Löwen lost 30:28 during the group phase.

Vardar and Szeged were other teams who were defeated in Belarus this season – Flensburg was warned.

For Flensburg´s Serbian left-back, Petar Djordjic, the match was special, as he will be joining Meshkov Brest next season.

A Kempa goal of Holger Glandorf, benefiting from a pass across the circle by Hampus Wanne, secured Flensburg the narrow win, following a 10-minute goal drought.

Meshkov Brest caught up with Flensburg´s 25:20 lead – the largest margin of difference in the match – but the one goal advantage still puts Flensburg in a comfortable position ahead of the second leg at home.

Still, coach Vranjes cannot be entirely happy, considering how his team was dominating most of the second half.

Led by a well-playing and well-shooting Pavel Atman, Brest started taking a quick three-goal lead at 6:3.

Brest went up by four goals at 8:4 and 9:5, but Flensburg improved significantly when coach Ljubomir Vranjes used Henrik Toft Hansen in the defense and Jim Gottfridsson on the offensive end.

Four minutes before the end of the half, Flensburg caught up completely as Rasmus Lauge benefited from a counter attack, equalizing the score at 12:12.

Anders Eggert gave the visitors their second lead since 1:0, when he made use of a penalty shot (14:13) and in the dying moments of the half, Gottfridsson arranged for a two-goal Flensburg advantage.

After limping off the pitch in the first half, Atman did not return anymore, and his replacement, Artsiom Kulak, did not have his class.

Five minutes into the second half, it was Flensburg´s turn having to substitute a key player, as Tobias Karlsson had to leave the court. “Tobbe” was not seen any more either.

Still, Flensburg continued to have the upper hand, increasing their lead to three goals (16:13) and soon thereafter to four (17:13).

For a brief moment, Brest tried pushing Simon Razgor forward in their 5-1 defense, but without success.

In the following minutes, the two teams took turns at scoring goals, before Flensburg went ahead by five goals with 10 minutes on the game clock.

Then came a long goal drought for the club from the far north of Germany.  In the last minute, right-wing Rajko Prodanovic made it 25:25 for Brest and it all looked like both teams would settle for a draw before Glandorf’s brilliant goal secured Flensburg’s victory.

Even though Flensburg were heading for a considerably bigger win there doesn’t seem to be much to worry about.

The one-goal lead is a fine starting point for the match at Flens Arena next Sunday.  Flensburg simply has more quality players compared to Brest and Vranjes & Co. will make it to the quarter-finals – no doubt about it.

Other matches on Sunday

Szeged’s playmaker, Stas Skube, got the better end of his older brother, Silkeborg playmaker, Sebastian, when Szeged caught up with a six-goal deficit, winning by two.   The result will make the second leg match at home a much more enjoyable affair for the Hungarian team.

Are the ruling Champions League winners on their way out of the competition already?

Kielce have their work cut out for them, when they receive Montpellier at home, next Sunday.  The Frenchmen certainly achieved the most notable upset in the round of Last 16 so far, as they turned a 14:16 half time deficit into a five-goal win.