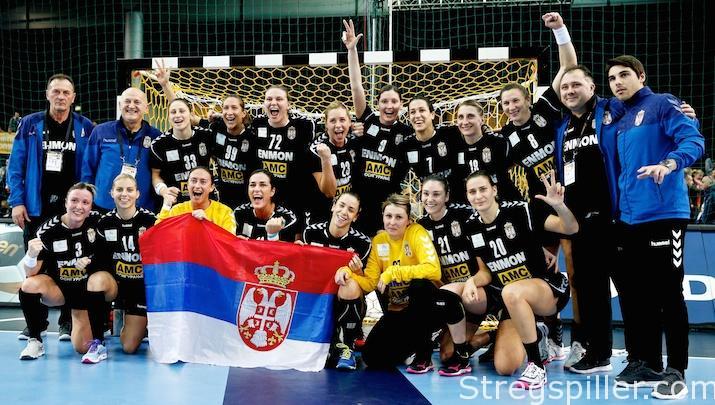 The preliminary round at World Cup 2017 came to an end in all four groups, on Friday.   On the last match day, The Netherlands literally ran over Germany, as Oranje showed their best performance in the competition, so far.

However, neither one of the two teams won their group, instead Serbia emerged at the top of Group D, beating South Korea 33:28.

Before the last game of the group phase, Germany were on top with seven points and The Netherlands were in fourth position with five points.

Both teams had already qualified for the Round of Last 16, and securing the best possible rank for the next round was all that was left to do.

The Netherlands were just as dominant as the result indicated.

Biegler’s  “Ladies” were just not able to follow the Dutch players who performed at such a high pace, while showcasing their best performance, so far.

If anyone seriously believed that Germany could play for the World Championship, they will have to put the thought aside after this game.

The Netherlands decided the match in the first half.

Their performance was just outstanding on both ends of the court, and the German host couldn’t do much to get a break, never mind stopping them.

On top of it, Germany turned over the ball frequently and incurred numerous mistakes, making the task even easier for The Netherlands.

Germany’s coach, Michael Biegler, was forced to call time out already four and a half minutes into the match, as his team was down 1:4.  Unfortunately, it did not help a bit; the team of Helle Thomsen simply continued where they left off.

Nycke Groot and Lois Abbingh were the leading actresses in an impressive attack, and on the other side of the pitch a 5-1 defense caused Germany´s offense severe problems.

The hosts were only able to follow The Netherlands until the score of 1:1.

At least, Germany managed to draw in the second half, but The Netherlands remained in control and continued to  benefit from the many German errors.

The “Flying Dutchwomen” set their focus on maintaining their comfortable lead without running into any problems.

Team Oranje were ahead by nine goals several times, and coach Thomsen took the opportunity testing seven-against-six attack for a while.

No one could complain about the atmosphere at Arena Leipzig this evening, but it appeared that there were at least as many Dutch fans in the hall, as there were Germans – at least that was the impression.

Other Matches in Group D

Serbia won the group, courtesy of a well-executed game plan against a Korean team that led most of the time in the first half. However, the Serbs took over after the break, and towards the end of the match, they left no doubt which team was in charge.

Sweden pulled off one of the greatest sensations at this championship, as they won against their Scandinavian neighbor.

After being in trouble for most of the first half, Norway seemed to get a grip on the game, when they got up 18:14.

But, already at half time, the Swedes had reduced the deficit to two goals, and in the second half, they were leading several times before creating a decisive advantage towards the end of the game.

Sweden simply managed to take some pace out of the match while setting their own rhythm.  As it turned out, this was enough to not only win the match, but the group as well.

Other Matches in Group B

With the outsized victory against the pointless North Africans, Japan qualified for the Round of Last 16, leaving Brazil and Montenegro to fight for the last remaining ticket to the knockout phase.

The question ahead of this match was: Would the World Champions from 2013 or the European champions from 2012 be out of the race for medals already after the group phase?

After Japan´s big win against Tunisia, Brazil needed a victory to proceed to the elimination round while a draw would do it for Montenegro.

After a close affair, with the lead changing all the time, a draw was exactly what Montenegro got. For Brazil the disappointment was hard to swallow, obviously.

The Round of Last 16

The 1/8 finals will shape up as follows: