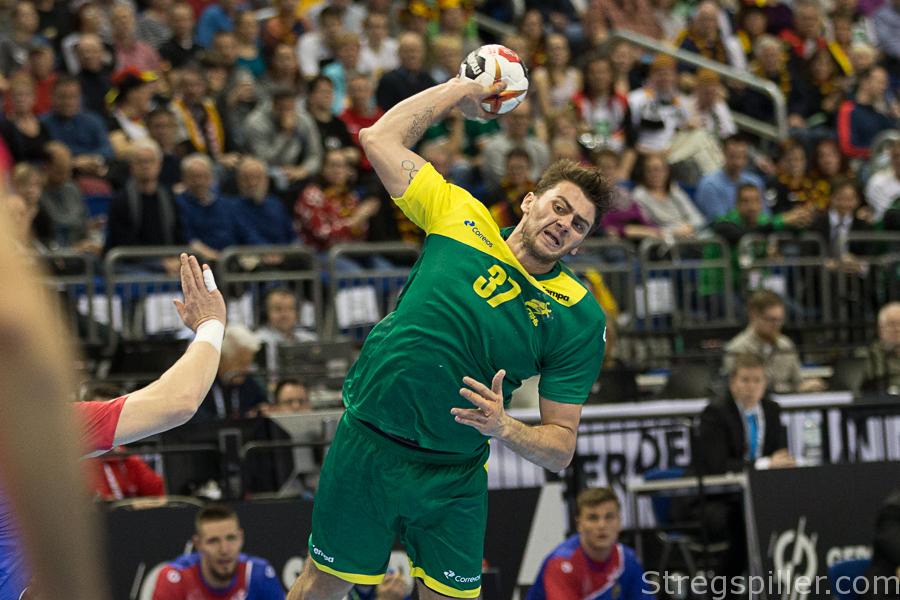 “For us to be ahead of Serbia makes us extremely proud”

INTERVIEW – Denmark’s powerful performance against Norway or the clash between France and German have made the headlines during the preliminary phase of the World Championship, but in the shadows of Berlin’s Mercedes-Benz Arena, Brazil have written history.

The South-Americans, won three games and made it to the main round of a World Cup, for the first time ever. They’re already sure they’ll even improve on their achievement.

“We’re hungry for more. We’re not used to doing so well, but we want to show the people back home that we’re working and that we can have results, just like the women’s team,” says Felipe Borges, one of the squad’s most experienced players.

The left winger has played many seasons in the Champions League with French side Montpellier and the Portuguese team of Sporting. As of last summer, he’s back in France, playing in Tremblay en France.

Leaving your home country, is key for any Brazilian handball player, he explains.

Brazil lost their first two games at Handball ’19, to France and Germany. Especially, the thirteen-goal defeat against the hosts, could have been a “knock-out” punch of sorts.  Instead, it acted as wake-up call, as Brazil went on to beat Serbia, Russia and Korea in the following days.

“We knew that we had to get our heads back up. Eight or ten years ago, bouncing back from such a loss would have been difficult, perhaps impossible. But we all gained experience in our clubs and that has helped us to get back on our feet quickly. We had to stay focused and continue on the right track,” recalls Borges.

Now, that Brazil are among the twelve best teams in the world, they will compete against Croatia, Iceland and Spain in the next few days, in Cologne. Sitting on zero point, their chances of making it to the semi-finals are second to none, but just as they did in past competitions, they’re there to build the future.

“We’re very happy to be here, of course. Now, we want to show everybody that we deserve our main round spot. We don’t know if we’ll win any of those games, but I think our goal is bigger than just that. If we don’t do it now, maybe we’ll do in 10 years. The important thing is to carry on and push handball in Brazil further,” says Borges.

The player from Tremblay may be too modest to state how much sacrifice he and his teammates went through to make it that far. Lacking money, the Brazilian federation rarely if ever collects the national players outside of international competitions. Not all of them are professionals and money is precious.

“That’s an even bigger achievement when you know how difficult our conditions are. For us to be ahead of Serbia makes us extremely proud,” smiles left-back, Haniel Langaro, who plays for Dunkerque, in France.

But the results of the Brazilian men’s team have raised the level of interest in their home country.

“The media is talking about us. This is not unusual but now they’re really paying attention. We’re not in the semi-finals or the final, but it’s important enough to attract attention. I think the Brazil national team reflects the best of what our country can do, as far as handball is concerned. But there are less and less clubs as well as money, so it’s kind of tough,” concludes Borges.