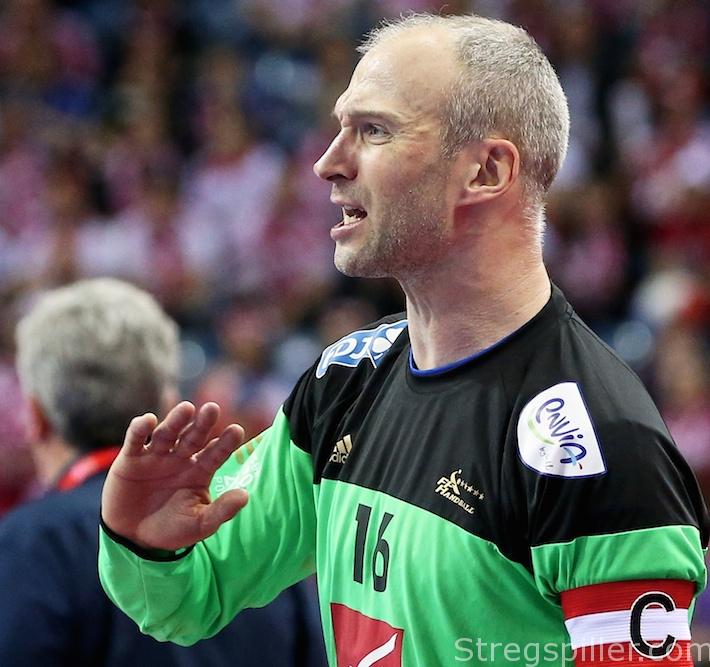 Second day of the Men´s tournament – France humiliated Qatar in Group A – Denmark had no problems with Tunisia, and Croatia booked a narrow win against Argentina.

In Group B, Germany and Slovenia took their second win, defeating Poland and Brazil, while Egypt booked a surprise victory defeating Sweden.

The meeting was a remake of the 2015 World Championship final – at the time France won 25:22 in Doha.

Both teams got off with a win in Rio. Qatar had a most impressive performance, defeating Croatia 30:23, leading by 10 goals along the way.  France nearly lost a seven-goal lead, as they defeated Tunisia 25:23.

The match was also a meeting between two of the favorites for the gold medal.

Following an equal start, France took the upper hand thanks to a strong Thierry Omeyer in goal, and a brilliant play of attack, led by Nikola Karabatic and well-shooting Mathieu Grebille.

Still, the two backs Rafael Capote and Zarko Markovic were able to keep Qatar in the game, though, with fine help from Abdul Murad on the left wing.  But neither Capote, Markovic, Murad nor Danijel Saric in goal could save Qatar from being three goals down at half time.

Just like in Qatar´s opening match against Croatia, Valero Rivera replaced Saric with Goran Stojanovic in goal for the final 30 minutes of the match.  However, Stojanovic was able to do just as little as his teammates, while the French squad fired on all cylinders.

Omeyer improved even further on his already outstanding performance even, until he called it a day and left goalkeeping to Vincent Gerard with 11 minutes on the clock.

Karabatic pushed his teammates to a remarkable performance before taking a well-deserved rest on the bench without reducing French dominance in any way.

Meanwhile, Luc “Skywalker” Abalo, who had his problems with Saric in the first half, scored one brilliant goal after another against a helpless Stojanovic.

A surprisingly passive Valero Rivera abstained from taking a timeout before things went really bad for his crew.  Simply put – France humiliated Qatar as the second half progressed.

France reminded all pundits of their frightening strength.  And the squad definitely compensated for some shaky performance against Tunisia.

This time, they showed their enormous depth – a factor that may very well prove to be decisive in a long tournament like this one.

Qatar, on the other hand, left a downright embarrassing impression in the second half of the game.

It was especially surprising, that Valero Rivera neglected to break the rhythm of the games, when the match began moving away from his team.  His passiveness played no insignificant role in Qatar´s humiliating result.

The fact that he kept Rafael Capote out of the attack throughout the second half must be interpreted as a sign that coach Rivera had given up on this match at an early point – unless Capote was suffering from some unknown injury.

After needing the entire first half to get started in their opening match against Argentina, the Danes were dominating from the beginning against a Tunisian team, that was handicapped by losing key player Issam Tej because of a red card after three minutes and 33 seconds.

Goalkeeper Niklas Landin and the two wing players – Lasse Svan and Casper U. Mortensen – were the dominating forces for Denmark.

At the World Championship 2003, Argentina opened the tournament with a sensational 31:30 win against Croatia.  Eventually, Croatia went on to become World champion.

Whether the Croatians go on to win the Olympic gold in Rio is a big question, but at least, they avoided a defeat to Argentina this time around.

Yet, their narrow win was a struggle and only a penalty shot with nine seconds left on the game clock, secured two points for the bronze medalists of the 2016 European championship.

Argentina were leading by four goals several times in the first half, but they were unable to maintain the high pace throughout the match.

Still, enormous fighting spirit helped the squad from South-Ameriica to stay in the game until the very end.

A – questionable – red card for left-back Christian Dissinger could not rob Germany of their second successive win.

Poland´s coach Talant Duishebaev tried to surprise his opponents with a 5-1 defense at the star of the match.  A tactical measure that he abandoned eventually – only to reassume it towards the end of the game, even when Germany were playing with seven field players.

While Germany’s “Bad Boys” are clearly heading to the quarter-finals, things are getting tight for Poland who have now lost their first two matches.

Slovenia took their second win in their second game, while Brazil were not able to repeat their stellar performance of the 34:32 win against Poland, two days earlier.

Veselin Vujovic´s Slovenian team was leading all the way, with their largest lead at plus six-goals, several times in the second half.

Much to the dismay of the many fans, the Brazilian host missed several opportunities to get back into the match.

With a goal from Mohamed Elbassiouny with 12 seconds left to play for, Egypt managed to create a big surprise, taking their first victory and leaving Sweden with zero points.

It did not take Sweden long to get ahead 6:2, but the Scandinavians soon got into trouble because of Egypt´s aggressive defense and fast play of attack.

Later, Sweden was up by three goals (20:17), but the Egyptians came back once again, and in the end, they benefited from two Swedish suspensions.