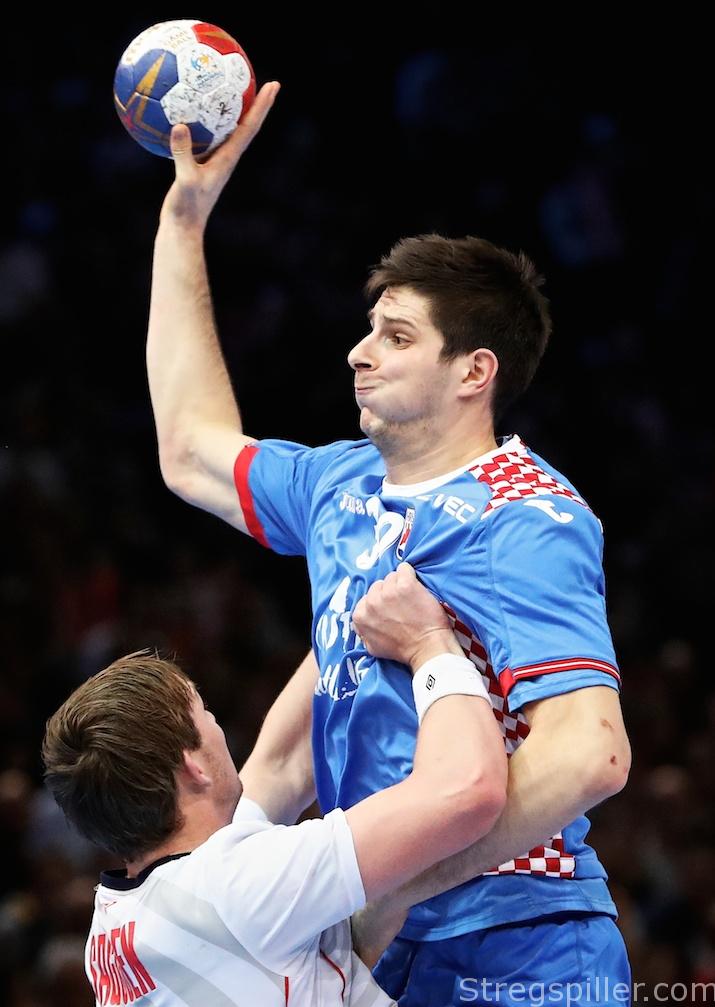 France are favorites – but it’ll be close

PREVIEW – World champions France are the favorites to take back the European title, when EHF EURO 2018 kicks into high gear in Croatia, on Friday.

However, French coach Didier Dinart is facing problems on the line and on the left back position, while other nations stand ready to grab the trophy.

Not to long ago, France was holding all three titles in the world of handball, at the same time.

At the moment, “Les Experts” are “only” the 2017 World Champion after winning on home ground.  Two years ago, a depleted German side stunned the world by taking the European title, and on a warm August night, in Rio de Janeiro, Denmark beat France taking Olympic gold in 2016.

In a few days, France will be doing everything they can to take back the European crown at the EHF EURO 2018 in Croatia, and they are favorites to do so, but competition will be tougher than usual.

Let’s take a closer look at the hot candidates for precious metal, the dark horses and the teams without a real chance

Croatia – Home advantage always means the host has an edge and that’s certainly true when playing in a Balkan country.

Not only do you have the support from the vast majority of the crowd but you also play in surroundings you are familiar with, and it’s almost inevitable that the home team get’s a “bit more” from the referees than your opponents do.

Still, playing in front of your own fans also brings along some extra pressure, and there is no doubt that expectations of Croatian fans will be elevated.

Domagoj Duvnjak is back from injury, and he seems to be in better shape than one would expect following a lengthy recovery. The big question is, if Croatia can withstand the pressure of a whole nation.

We may already get an indication in what will be a heated encounter between Serbia and Croatia on the very first match day.

In their main round group, France and Norway look like the toughest hurdles en route to the semi-finals.

This time, the Serbs will have to swallow a bitter pill, accepting Croatia winning the group after defeating Serbia in the opening match.

In all likelihood, Serbia will end up battling Iceland for a last spot securing main round berth. Here, the Serbs have a narrow edge, but as this group crosses with France and Norway, more than the main round won’t be in for them.

Sweden – The Swedes have an interesting team, and Kristján Andrésson, who took over from the legendary coaching duo Staffan Olsson and Ola Lindgren after a disappointing Rio Olympics in 2016, brought back success to Tre Kronor. A quarter-final appearance at last year’s World Championship was very much acceptable.

Together with former THW Kiel playmaker and Swedish international Martin Boquist, the two form a strong coaching duo and can rely on some very exciting players.

As always, a solid 6-0 defense is the backbone for any Swedish success and in offense they will depend on their fast breaks, which are just as essential. The three wingers – Jerry Tollbring, Niclas Ekberg and Mattias Zachrisson – will be most crucial in executing this strategy.

The biggest surprise in Sweden’s squad is Philip Henningsson (IFK Kristianstad) who has been selected as left back instead of successful Markus Olsson (Skjern), but Andrésson and Boquist probably know what they are doing.

A main round ticket should be a given, while the semi-finals will be difficult to reach.

Iceland – it is impossible not to be impressed by the number of international top athletes this island with a population of barely 335,000 keeps churning out.

However, the country is not producing quite as many outstanding handball players these days, and that’s the reason why their team usually loses steam along the way in major championships.

It’s likely to happen again this time around, and on behalf of the Icelanders, there is every reason to fear that they will not make it past the preliminary round.

France – Didier Dinart has his work cut out ahead of EURO’18 – two positions in particular are cause for concern.

It has been a fact for long that Ludovic Fabregas will not be fit, and following the Golden League competition last weekend, Luka Karabatic´s ankle injury only adds to their line player trouble.

Cedric Sorhaindo and Nicolas Tournat are highly capable, of course, but Luka Karabatic will be missed in defense, if he does not get fit during the tournament.

France are also facing some serious issues on the left back position, where Mathieu Grebille, William Accambray and Olivier Nyokas are all sidelined nursing injuries. It leaves Timothey N´Guessan as the only real left back in the French attack.

Still, France possesses sufficient power and quality to be my top pick for winning the title.  However, much will depend on the performance of Nikola Karabatic – more so now than ever before.

France with or without their charismatic leader is a very different team, and if Karabatic can’t deliver, “Les Bleus” won’t even reach the semi-finals.

Norway – The two finalists of the 2017 Word Championship – France and Norway – will meet already on opening night at EURO’18, and although this match will be crucial with regards to points carrying through to the main round, neither team needs to fear an early exit – opposition is simply too weak.

Once again, it will be interesting to watch Norway who impressed us all a year ago, winning the silver medal at the World Championship in France.

At first sight, the squad of coach Christian Berge can hardly be characterized as well balanced. Of his 16 players, four are line players and another four will perform best on the right back position.

As Berge’s crew will be up against Croatia and Sweden as well as either Serbia or Iceland in the main round, it may be more difficult for them to reach the semi-final as many think.

From this bracket, France and Croatia look to be the favorites for the semi-finals.

Belarus – As I already indicated, this group is likely to turn into a “walk in the park” for France and Norway.  Belarus impressed from time to time in the past, just squeezing by but they never go deep into the tournament.

This time, the Belarusians will probably make it to the main round, but that will be the end.

Austria – The only reason why Belarus will emerge from the group phase is because Austria is even weaker. Looking at all four groups, the Alpine nation appears to be the hottest candidates exiting EURO’18 early.

Germany – If you can allow yourself leaving players like Fabian Wiede and Finn Lemke as extras, you musthave a really strong team.

Indeed Germany’s head coach, Christian Prokop does take a powerful crew to Croatia – on paper the squad looks much stronger compared to the team which became European champions two years ago. Back in Poland, Germany was hit by one injury after the other, which made their triumph so much more sensational.

There is no reason to expect the so-called “Bad Boys” to become “Sad Boys” this time around either.

Prokop shows up with a team that can go all the way. And even in a group including three Balkan nations, Germany should be strong enough to emerge at the top and take maximum points to the main round.

In the next phase, they will fight with Denmark and Spain for the two semi-final spots.  The semi-finals are a very realistic scenario for Germany, at the very least.

Slovenia´s controversial Serbian coach is always good for surprises – surprisingly often. Prior to this European championship, he found it appropriate to axe playmaker Dean Bombac, while one of the world´s best right wingers, Dragan Gajic, has not made the team for quite some time already.

Still, one should not underestimate Slovenia or Vujovic for this matter as he led his men to a bronze medal at the World Championship in 2017.

A similar achievement is highly unlikely this time, though. In Group C, they will come in second right behind Germany, and a main round appearance will be the end for them.

Macedonia – The Macedonian squad does not depend as much on Kiril Lazarov anymore as they once did. Good for them, especially as the 37-year-old right back is not what he used to be. His role at HBC Nantes, has been considerably smaller than many expected.

While Macedonia will enter the tournament in Croatia with a homogeneous squad, the team is still not strong enough to really make an impact at a major championship.

They will play a modest role, making it to the main round – as they have done before – but just as on previous occasions, this will be the end for them.

Montenegro – Considering the injury of Vuko Borozan, Montenegro´s last chance for any success at EURO’18 vanished like morning dew shortly after sunrise.

The skilled left back from Vardar Skopje has not been able to recover in time following a car accident back in December. And with their key player sidelined, Montenegro can plan for an early exit from the competition.

Denmark – A tactically brilliant coach, a strong 6-0 defense and Mikkel Hansen – these are the key factors in support of a Danish success in Croatia.

In Nikolaj Jacobsen, Denmark has a highly skilled coach whose strongest asset is a solid 6-0 defense in front of a goalkeeper that represents worldclass – Niklas Landin.

Denmark’s defense serves as a powerful base, allowing for efficient counter attacks, while on the other side of the court they have shown weaknesses in established attack.

They do possess three superb playmakers – Rasmus Lauge, Mads Mensah and Morten Olsen – but the team has run into problems when relying on the handball artistry of Mikkel Hansen too heavily.

Still, the Danes are strong and versatile enough and do stand a good chance in the highly anticipated main round battles against Germany and Spain to secure one of the two semi-final tickets.

Spain – The fact that Victor Tomas will be missing the action was one of the biggest surprises ahead of EURO’18, where Jordi Ribera has enlisted a number of younger players, while relying on some of the experienced names such as Raul Entrerrios, Joan Canellas and Daniel Sarmiento.

Spain have never been European champions yet, but will not have much trouble making it to the main round. From then on, it will be a real challenge to get past Denmark and Germany to reach the semi-finals.

Hungary – Coach Ljubomir Vranjes and playmaker Mate Lekai are the two individuals, the Hungarians hang their hopes on.

The tactical and communication skills of Vranjes will be in high demand, while Lekai will have to play on the same level for his country as he has done for Veszprem this season, for Hungary to stand a decent chance, now that Laszlo Nagy has quit the national team.

Hungary certainly has the potential to create an upset against Denmark and Spain, but at the end of the day, they will be content once they reach the main round from third position in Group D, while a semi-final berth appears to be out of their reach.

Czech Republic – A 14-goal win against another EURO participant, Austria, raised some eyebrows, but as always it is a big question how much you can rely on the result of a test match? On the outset, the Czechs do not look like a team that can make it past the preliminary round.

France will win the final against Denmark, while Germany beats Croatia in the bronze match.