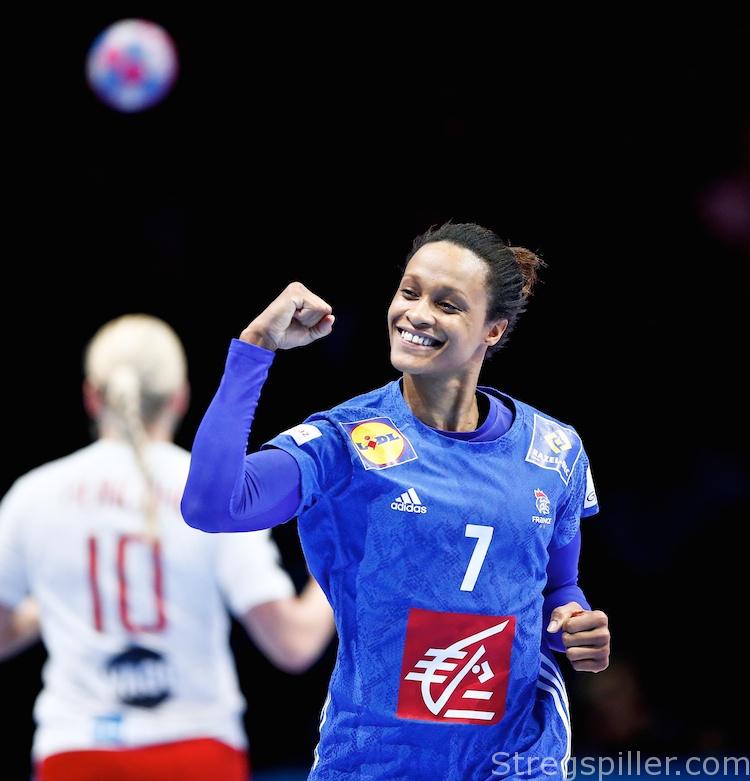 MATCH REVIEW – France dominated Denmark, as they opened the main round with a six-goal win against the Scandinavians, on Thursday evening.

The difference between the teams was all too obvious and in the Danish team, only Stine Jørgensen will have some reason and look back at the match, as she became the highest scoring Danish player in the history of the European championships.

*Both teams entered the main round with two points each.

In Group A of the preliminary round, Denmark had recorded a 30:29 win in a thriller against Sweden, an easy 28:21 against Poland and a heavy loss against Serbia (30:25).

*France had opened their group phase campaign with a surprising 26:23 defeat against Russia, but “Les Bleues” improved considerably thereafter, against Slovenia and Montenegro, who they defeated 30:21 and 25:20, respectively.

The Danes followed France only in the early part of a match, which was completely dominated by the reigning World champions for the 52 minutes that remained.

Simply put – France were the better team in all aspects of the game!

Once they got started, the home team did not have much trouble with a Danish team, which left yet another disappointing impression, just as they did against Serbia.

Jørgensen & Co. were maintained a one-goal lead (4:3), before France took over.

Four goals in a row, turned the score in their favor (7:4) and from that points onwards, they did not look back.

Stine Jørgensen, who sat out in Denmark´s two last previous games, came on after a quarter of an hour, but she could not affect the course of the game either.

As Amandine Leynaud in goal of France showed one of her better games, the host had no problems to pull away

Grace Zaadi pulled the strings as center back and Estelle Nze Minko was on fire as well, and as a consequence the host has little problems, creating a six-goal margin (14:8). And, as the Danish goalkeepers, Sandra Toft and Althea Reinhardt, could not do anything from their end, France kept the lead until half time.

Considering the way the first half turned out, there were no real expectations of a Danish comeback, and indeed it did not happen, the humiliation continued, instead.

Even when head coach, Olivier Krumbholz, began to use his bench, his team continued to control the game.

His colleague, Klavs Bruun Jørgensen, tried a more aggressive defense formation, but that did not change the dynamics of the affair one bit, as the Danes kept struggling.

Any way you looked at it, France were the better handball team, and when Leynaud improved her performance even more it became too much to handle for Denmark.

France went ahead by nine goals several times before settling the score at 29:23.

On a positive note, Stine Jørgensen became the highest scoring, Danish player, in the history of the Women´s European championship. Her four goals in the match, led to a total of 96, thus beating Rikke Skov´s previous record of 93 goals.

If Estelle Nze Minko had continued in the second half, where she left off in the first, she would have received award, for sure.

But, as things went, the Györ keeper was honored, following  her stellar performance during the course of the evening.

“We felt that we were very well prepared and I think it did not take us long to take control of the game.

“In defense we were aggressive as well as in our attack – and as the match went on, we kept a firm grip.

“Furthermore, I can only be content with the ambience in the arena. The crowd showed terrific support!”

“I am annoyed and disappointed.

“We never got a good hold of them defensively and you just cannot afford it against a team like France.

“However, we carried on and did not roll over.

“Right now, we are disappointed, but we have not given up. We realize that we’ll have to win the rest of the games, although it may not even be enough.”

France confirmed once again that they are a very serious contender for the European championship – a title France have never won in women´s handball.

Now, they can prepare for their next assignment against Sweden, on Saturday.

For Denmark, a trip home is now a viable option. For now, the Danes can look forward to three days off before meeting Montenegro, on Monday.

They must succeed in the upcoming match as well as their last main round game against Russia, for Denmark to keep their hopes for a semi-final appearance alive. But, as Fie Woller mentioned – it may be enough.