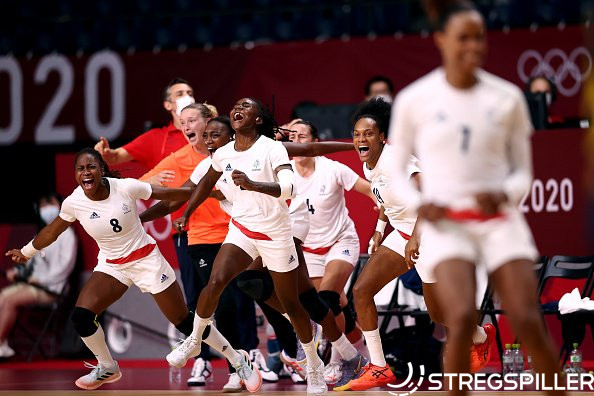 The two sides met in one of the best games of the preliminary round, treating us to a 28:28 draw, ending in drama as Grace Zaadi had a penalty saved by Jessica Ryde in the final throw of the match.

Sweden have emerged as one of the surprise packages of the competition, playing a dynamic and effective brand of handball, making full use of their strengths as they stormed past South Korea into the semi-finals.

2016 silver medallists France took their time getting into their groove in Tokyo but got their act together when it came time for the knockout matches and outclassed the Netherlands two days ago, inspired by a phenomenal performance by Amandine Leynaud in goal.

France’s greater experience at this level shone through at the very end as they found the tools required to break free from Sweden in the final 12 minutes and qualify for their second consecutive Olympic final with a 29:27 win.

Both sides looked to open the contest with free-flowing attack but the notable aspect of the first 10 minutes was the French defence’s inability to contain Jamina Roberts and Carin Strömberg as Sweden raced into a 5:1 lead. Coach Krumbholz reacted quickly, pushing Estelle Nze Minko out in front of a shallow 5-1 defence, which paid immediate dividends.

The expected physicality teetered on the edge of acceptability in the first half with both sides racking up the two-minute suspensions, with France often the guilty party. However, the Swedes were unable to take full advantage of it, while the back court trio of Zaadi, Flippes and Pineau played out of their skin to score in difficult situations, giving France a narrow advantage at the break.

Nerves began to heighten at the restart with both sides making poor decisions in attack. There was disaster for Sweden in the 40th minute as Linn Blohm got her third suspension, spelling the end of the game for the crucial defender and line player.

The sides traded goals right up to the final 10 minutes, when Zaadi had a chance to give France a three-goal lead from the penalty line but another penalty save, this time by Bundsen, kept Sweden in the contest.

A double-save by Cleopatre Darleux, followed by a Nocandy goal gave French an all-important 27:24 advantage with five minutes left, which they were never going to let slip.

As the second half wore on, it became evident that Sweden were finding it much more difficult to find a route towards goal as their attack became even more focused on the middle of the court than usual with the emphasis on Roberts and Jenny Carlson required to shoulder the burden.

France meanwhile, relied on and trusted everyone to play a role in the attack with 11 players on the scoreboard. This strength in depth came to fruition late on with five different back court players scoring in the final 12 minutes, alongside three goals from Pauletta Foppa on the line.