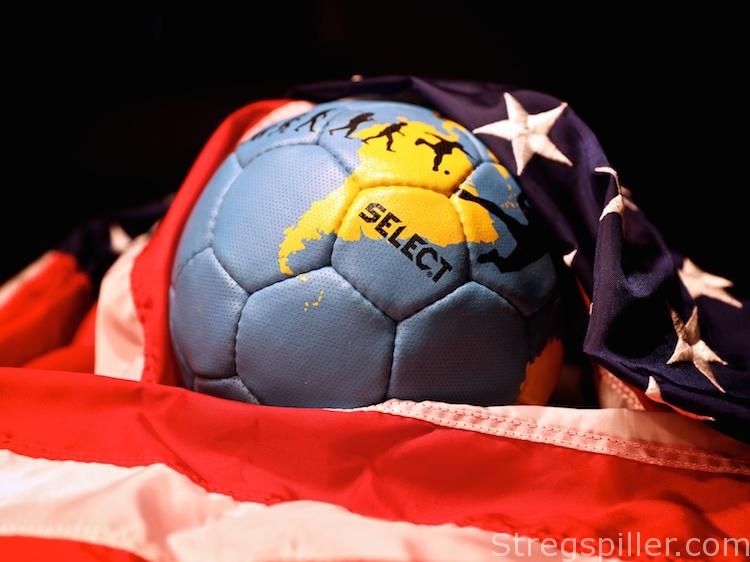 In this exclusive interview with stregspiller.com, Norway’s former national coach talks about the unusual approach he took to land his current job and about the challenges of developing handball in the U.S.

Actually, it was an advertisement on Facebook that led to Robert Hedin´s current job as coach of the USA´s men’s national handball team.

His wife, former Norwegian international, Kari-Anne Henriksen, saw the ad on social media, where the American handball federation was looking for a new national coach.

Some may think of this type of search as a rather unique method of engaging with a potential national coach, but Hedin´s wife managed to persuade him to apply.

“Actually, I had decided to take a sabbatical from handball, but my wife thought it was better that I would work, so she showed me the ad,” says Robert Hedin and laughs.

“I thought about it for a while before responding but once I did, I soon received an email with answers to my questions.

“It appeared to be a rather popular job as around 20 applicants had sent in their resumes. But after some initial phone calls and a meeting, I landed the job,” explains Hedin whose first task was qualifying the U.S. for the Pan American championship in Lima, Peru, in 2019.

It took two play-off matches against Canada to pave the way. The first one, on home ground, produced a 36:24 win, followed by a draw a few days later in the second leg.

“First, I was only hired for the two play-off matches. But right now, we are discussing how long my next engagement will last. We have agreed that it will be more permanent going forward,” says Robert Hedin who is already making plans for the future.

“At the moment, we are looking for opponents to play some friendly matches. We are probably going to compete against Mexico and Puerto Rico, but we also hope to get a chance to go to Europe and play some games there, where we can develop our players even better.

“Before the play-offs against Canada, for instance, we had a two-weeks training camp in Germany – it really paid-off.”

Depending on players with dual citizenship

Over the years, more than one attempt has been made to increase the sports popularity in the U.S. But so far, it hasn’t been successful and the level of handball made in North America is still pretty low.

It may come as a surprise that a former Norwegian national coach got interested in a job that apparently has little to offer and limited upside.

“I think it’s an exciting project and I see great potential for the development of handball in North America.

“Actually, handball is a sport that should appeal to the American public, if we can only manage to open their eyes to enjoy the game. After all, we are talking about a market potential including 350 million people.

“Right now, we get plenty of help from the IHF to promote and develop handball in the United States and the national Olympic Committee also does a great job, as handball is an Olympic sport.

“Therefore, I see a great future for handball in this country, but, of course, there are some challenges,” admits Robert Hedin who refers to the structure of American pro-sports as one of the main hurdles.

The big U.S. sports, such as football and basketball, recruit many if not most of their players from colleges, while a club structure as it is known in Europe is not widespread.

“As a matter of fact, handball is played in some colleges, but they do not offer scholarships.

“This means that those who take up handball are often young players who have not succeeded in other sports, and therefore they have to be re-educated and learn the sport at the age of 19 or 20. I think we can all agree that this is a pretty late start, if you want to achieve something bigger.

“In order to reinforce the national team in the near future, we are looking for players with dual citizenship in other countries and we have been quite successful with this approach already.

“For instance, we are in touch with players from Germany’s Bundesliga as well as some from the French and Spanish leagues. All of them have dual citizenship and may be potential U.S. internationals.

“The team we are working with at the moment includes one player from the 2. Bundesliga, one from the second division in France and one from the top flight in Egypt,” explains Robert Hedin who was part of Sweden’s national team that won the very first European championship, in Portugal (1994), and who also counts two Olympic silver medals on his CV.

“Typically, I will be in the U.S. during international weeks of which there are four or five every year.

“However, as we aim to have training camps in Europe, part of my time with the team will also be spent abroad; so my travel activity won’t be unbearable,” says Robert Hedin who sees his job as part of a long-term project as it will take time, to raise the level of the North American national handball team.

“We have to get American children to play handball, so that we no longer have to re-educate players from other sports at the age of 18 or 19. Only then can we make more ambitious plans.

“At the moment, the level of the team is quite good, assuming we have all of the best players at our disposal.

“Over the period of the next five years, I think we can reach the level of Argentina, Brazil and Chile – maybe we can land somewhere between Argentina and Brazil, as I consider Argentina a bit better than Brazil.

“But, it will be very difficult to reach a level that will be anywhere close to the top in Europe,” says a realistic Robert Hedin.