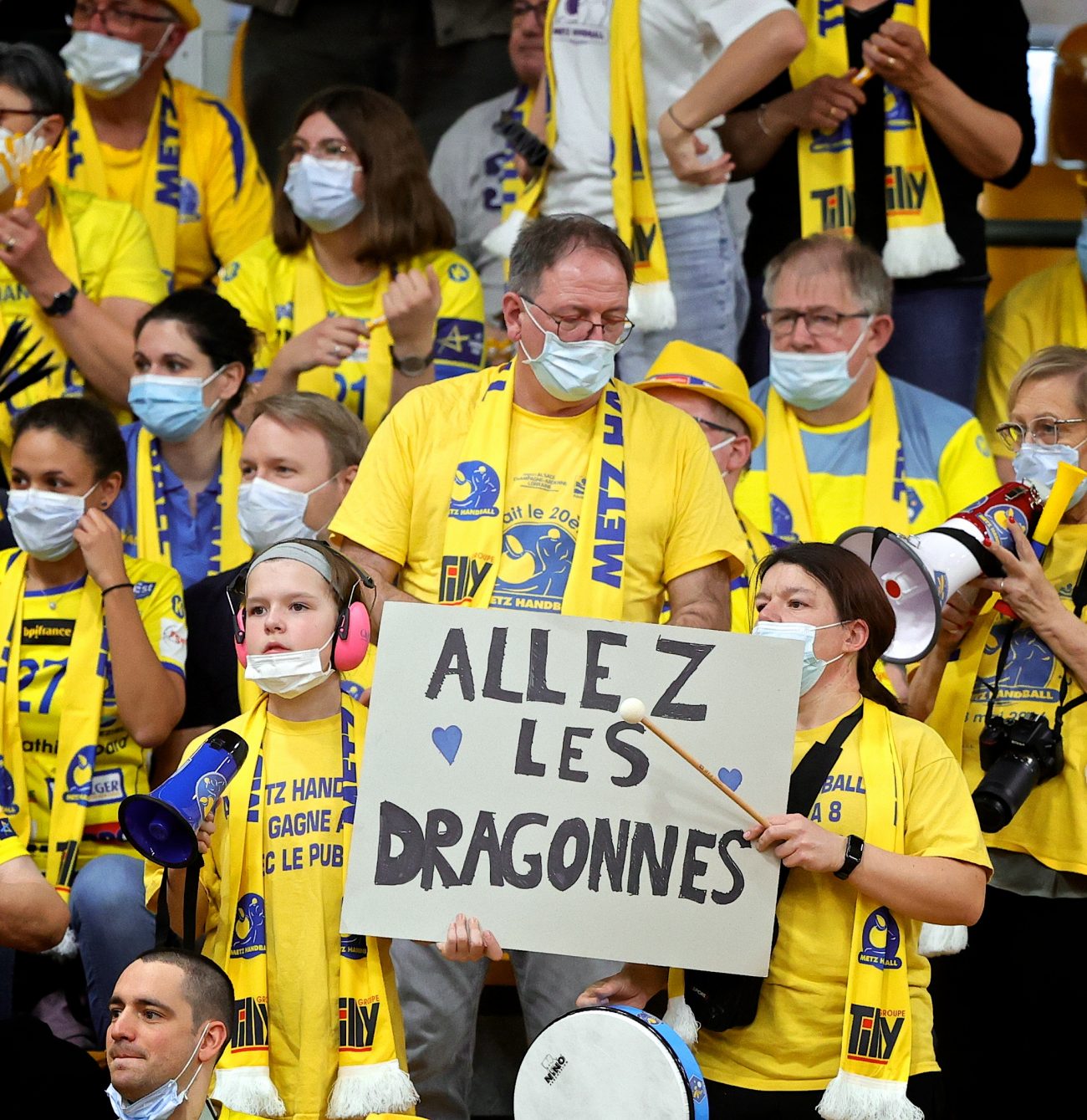 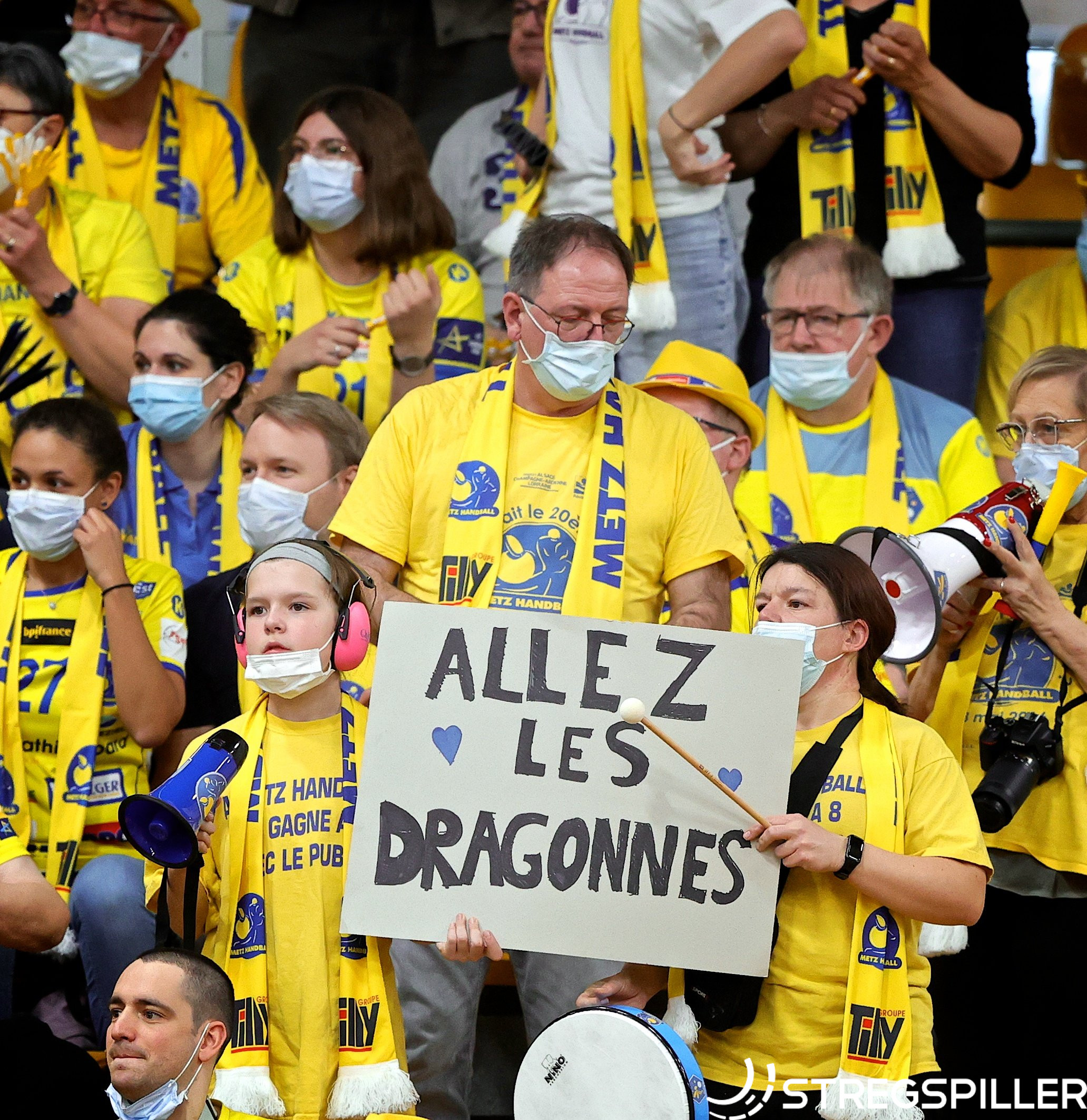 The “Yellow Wall” –  a term more closely associated with Dortmund’s famous football club rather than its handball section. Usually more than 24,000 fans set the impressive scene on the south tribune at Dortmund’s SIGNAL Iduna Park – Europe’s largest grandstand designated as standing room only.

A week ago, the club’s women handball division tried to transfer some of the electric atmosphere to nearby Helmut-Koernig arena, where the German champions met Metz HB in game one of the first elimination round of the EHF Champions League.

In the run-up to the match, even football super star, Erling Haaland, took to social media in an all-out effort to mobilize Dortmund’s fan base.  The EHF’s decision to suspend all Russian clubs (a consequence of Russia’s invasion of the Ukraine ed.) from the ongoing competition presented a historic opportunity to advance straight to the FINAL4 in Budapest from the Round of Last-16.  The winner of the match would simply skip the game against the designated quarterfinal opponent from Rostov-Don

A chance Dortmund’s handball women did not want to go to waste despite the numerous injuries of key players.

On the pitch it quickly turned into the uphill battle most of the pundits had predicted on the outset.  The depth and breadth of the French record champions were too much too handle.  In the end Nocandy & Co. left the court with an 8-goal advantage much to the joy of  the 100+ French supporters who had made the trip to Dortmund.

While the efforts of Dortmund’s handball women were no match on the pitch, some of the statements around the field during and after the event, deserve attention.

Already before throw-off, club president Reinhardt Rauball acknowledged the outstanding and historic  achievements of his team over the past two seasons in Germany’s HBF – a period very much dominated by Dortmund.

Later during the halftime break, football club legend and former goalkeeper, Roman Weidenfeller, not only paid tribute to the team’s previous success, but he recognized that the squad’s accomplishments should have deserved more attention from the broader public much earlier.

The weeks long PR blitz, ahead of the critical match against Metz produced 2,000 spectators – a significant increase over the 200 to 300 fans, who usually find their way to Helmut-Koernig arena.  Fast forward to the second leg of the elimination round and Dortmund’s club officials will get a glimpse of how the club’s future could and should look like, when the team enters “Les Arenes” in Metz.

A glimpse of the future?

It will be in Metz, where Grijseels & Co. will come to experience the emotions and full force of a wall of yellow clad fans, in support of the home team.

After the eight-goal win a week ago, a near capacity crowd will be ready to push the women led by team captain, Meline Nocandy, to the FINAL4 in Budapest and “Les Arenes” will serve as a worthy backdrop.

Dortmund’s club officials should take note of every detail on and off the pitch as the game in Metz may provide a preview of the road ahead for the German champions.

Unlike any other handball club in Germany (men or women), Dortmund has all the potential to become Germany’s premier address, certainly in women’s handball.

For one, BVB Dortmund already is a global sports brand, well established by the efforts and championships of the football section.  All that’s left to do is to extend the power of the label to women’s handball. From a marketing perspective the red carpet is rolled out already – just add “another piece” to it and keep walking.

Dortmund’s president, Rauball, is aware of it and club legend Weidenfeller acknowledged the responsibility to do more .  Now is the time to execute.

From infrastructure to franchise player

Helmut-Koernig arena in the shadows of Dortmund’s legendary Westfallen Halle is in the right spot geographically, but the venue’s multi-purpose infrastructure won’t allow for the creation of a dense atmosphere, which requires fans to be much closer to the action on the pitch. A better more suitable building will be of critical importance to expand the power of the brand beyond football.

At last – a “franchise player” – Alina Grijseels.  No other athlete in Dortmund’s current squad represents the organization’s rise to the top better than Germany’s Handball Player of the Year 2021.  Alina Grijseels is in her eight season with the club and recently extended her contract for two more years.

The athletic development of the explosive center-back over the past few years especially is remarkable and known beyond the borders of Germany. Now that Grijseels has committed to two more seasons, Dortmund would be well advised to take full advantage and keep building championship teams around her, as only a handful of handball clubs around the globe enjoy the skills of truly world-class playmakers – Dortmund is one of them.

There hardly is another town in Germany with a handball history as rich and deep as the one of Dortmund.  For decades the legendary Westfalen Halle was the number one destination to host international tournaments and club events.  Unforgotten are the many historic victories of VfL Gummersbach in Dortmund’s fabled arena.

Today, the women handball division of Borussia Dortmund are the obvious successor to write the next chapters of handball history and prolong the legacy.  Not only the club, but the city of Dortmund and the state of North Rhine Westfalia should build on the success of Grijseels & Co. and help to create a handball brand that will enrich town, state and community alike.

The pieces of the puzzle are right there in plain sight, all that’s left is to put them together.

From “Mur Jaune” to Yellow Wall

In Metz, Dortmund will get to taste of what’s in store for them down the road if management can execute the necessary steps successfully – on and off the court.

The 2nd leg Champions League match between Metz HB and Borussia Dortmund will be a handball fest for sure.  The site is prepared and the town of Metz is ready to celebrate the club’s second trip to the EHF Champions League FINAL4.

Can Dortmund feed off the electric atmosphere at “Les Arenes” and create some stumbling blocks for the host towards the tail end of a tiring and challenging 2021/22 season?

Grijseels & Co. should absorb and enjoy the energy of the crowd and celebrate their very own accomplishments of the past two seasons, while Dortmund’s club officials may take note of some details how to create and deliver Germany’s most powerful handball brand in the years to come.