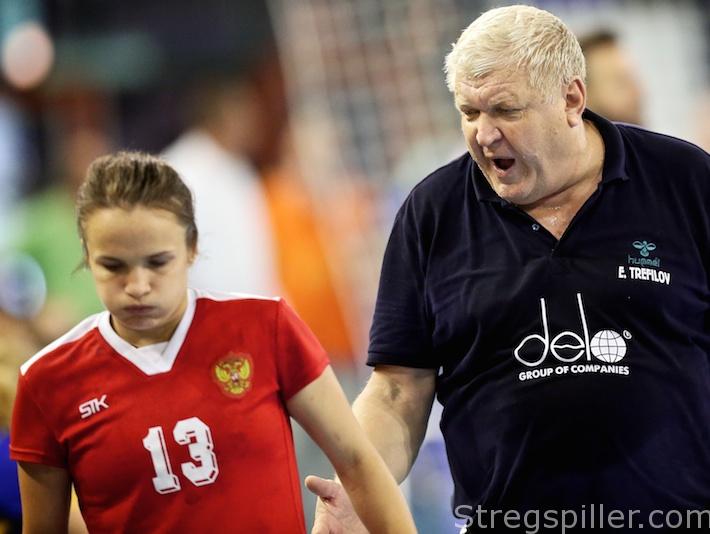 From Russia with Success

Yes, Russian athletes are probably not the most popular people these days.  After German journalist Hajo Seppelt had uncovered a national doping system and the McLaren report was published, a lot of people wanted Russia to be excluded from the Olympic games in Rio de Janeiro.  We all know the outcome of the story, so we should put it behind us.

After all, the Russian female national handball team was lucky to participate in Brazil and had an outside shot of winning the Gold medal.  But with Yevgeni Vasiliyevich Trefilov, also known as “King Tref:, on the sidelines, a team should never be called an outsider or a dark horse.  To be honest I don’t know if there is a more successful coach in female handball other than the controversial 60-year old.

Born in Beslesny, Trefilov grew up in the Krasnador region and was a handball player himself, but far from prominence.  He opted to take the coaching route, which turned out to be a good decision.  He took over Kuban Krasnodar when he was just 29 years old and led them to the Soviet league title in 1988, the first of his eight domestic championships.

His style of coaching was nothing noteworthy during the times of the Cold War, but once boarders opened and the Soviet Union split up, his (coaching) manners were noticed right away.  Although he’s yelling and screaming at his players, demanding the most from of his women, he must be a good communicator, otherwise he wouldn’t be a winner.  And unlike Romanian “dictator” Gheorghe Tadici, Trefilov actually does have a good sense of humor.

When he moved on to work with Lada Togliatti not only did he add various league titles to his resume, but also the Cup Winners Cup in 2002.  He then joined Zvezda Zvenigorod, winning the EHF Cup in 2007 and the Champions League in 2008.  After coming back to coach Lada he added another EHF Cup in 2012. That’s why you call him a winner.

In between, he coached the Russian national team.  It’s quite ironic that he never won the European championship, the only major trophy missing in his collection.  Between 2001 and 2009 his crew was almost unbeatable at the World championships, winning four out of five possible titles.

When stars like Ludmila Postnova and Jelena Poljonova retired from the national team, Trefilov was smart enough to rebuild the squad from scratch.  Russia was still good enough to qualify for all the big tournaments, but he made sure young players would be on the team so they can develop and gain experience.  It all played out at Rio, when his team won all eight games to capture Gold.

So what’s left for “King Tref”, after winning the most important title in international team handball and after winning all important club titles?  Well, that aforementioned European championship is still missing and for sure Russia won’t be travelling to Sweden in December as an underdog.  The team is still young, hungry and ready for more.

Meanwhile Trefilov can enjoy the time in between while trying to lead a Champions League newcomer to the promised (handball)-land.  He took over GK Astrakhanochka prior to the 2015/16 season and, to no real surprise, won the Russian league title.  It will be interesting to see what the club can accomplish in the EHF’s elite competition, facing Macedonian powerhouse Vardar, FTC from Hungary and a team that has yet to qualify.  Maybe, he will conquer the world of handball once more – from Russia with success.