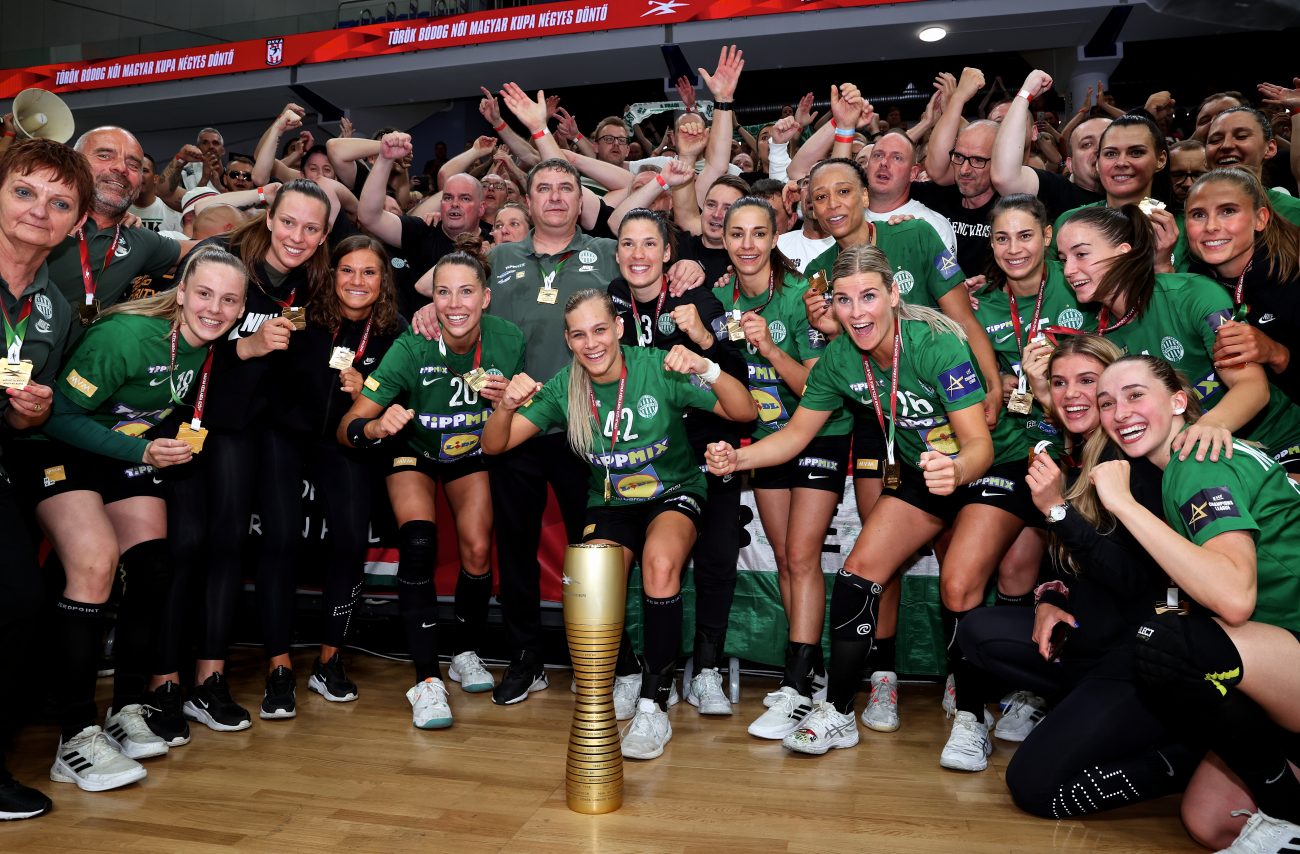 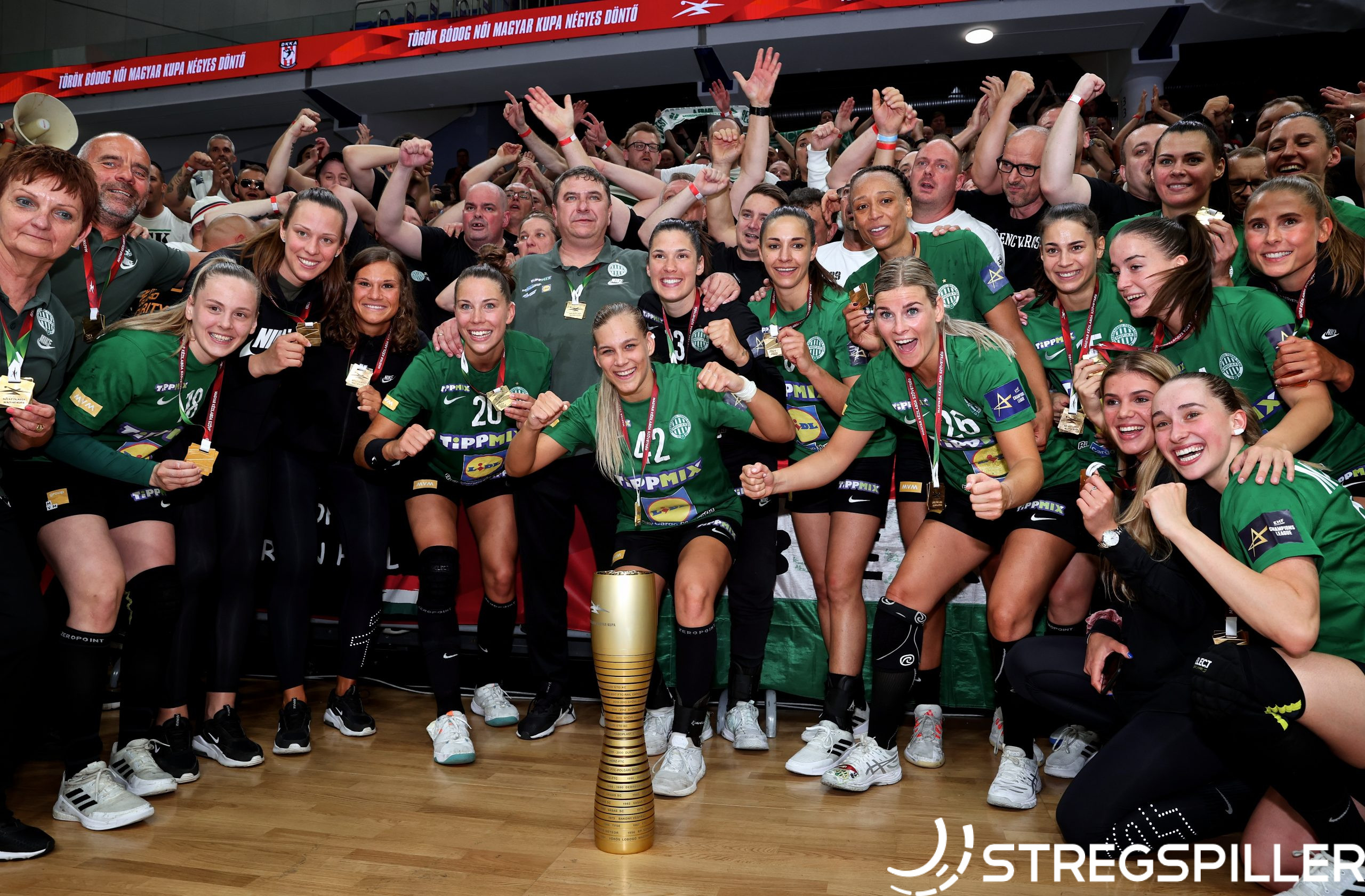 FTC Railcargo win the “Magyar” Kupa” for a 13th time

Despite trailing in the opening minutes of a thrilling cup final, FTC Railcargo clawed themselves back in the game and never looked back after the two teams changed sides, while keeping Gyor to ten goals in the second half.

The fact that FTC had made it to the final was not a given, considering the lackluster performance a day earlier against Siofok KC. The team of head coach, Gabor Elek had to endure a penalty shootout to advance to a last match of handball against the record champions Gyor AUDI ETO KC.

After the semifinal, FTC’s left-back, Emily Boelk, summed it all up: “We need to do more of everything – more courage, more speed, better scoring and better defense.”

Both teams were not at full strength entering the final round. Aniko Kovacsics, Julia Behnke, Alicia Stolle (FTC) and Kari Bratsett Dale and Jelena Despotovic (Gyor) were all missing for various reasons.

How well Stine Oftedal (Gyor) would be able to perform was another question mark as she was warming up with a properly taped right thigh.  in Gyor’s semifinal against Dunayjvarosi, she did not play at all.

Five minutes into the the game it felt like Gyor would walk away with an easy win.  The 2021 cup winners had no issues scoring.  Gyor’s right-back, Ryu Eu Hee, put her skills on display and after five minutes she and her teammates enjoyed a three-goal lead (4:1).

But, FTC did not roll over, to the contrary.  Zita Szucsanszki & Co. dug in and fought back – slowly but surely and just before the half-time buzzer, Szandra Zacsik scored the equalizer (12:12).  Gyor would not regain the lead.

In the second half the two teams traded goals and neither one of them could pull away until minute 45, when FTC opened a three-goal window, courtesy of Malestein, Klujber and Boelk.

Gyor kept pushing but Kinga Janurik in FTC’s goal stepped up big during the decisive phase of the match and in the dying moments of the game, FTC Railcargo and their numerous fans who had made the trip to FONIX arena, in Debrecen, began their celebrations.

It would be too easy to excuse Gyor’s loss by the absence of Kari Bratsett Dale and Jelena Despotovic. Maybe the easy start to the match was indeed “too easy” and suggesting a false sense of security?

Once FTC regained their footing they turned into a formidable opponent. Aside from the outstanding scoring of Angela Malestein (7), Katrin Klujber (5) and Emily Boelk (4), the tenacious defense effort of Beatrice Edwige and goalkeeper, Kinka Janurik were just some of the notable highlights of a true team effort.  If there would have been a “Player of the Match” award, it would have surely belonged to Janurik.

“Anything is possible in a cup final.  We all knew we can beat the favorite.  However, after our  lucky win yesterday (against Siofok KC ed.) and now walking away with a gold medal and the cup is just huge.

“In some way it feels like a bit of revenge after losing the championship in the league based on goal-differential against Gyor again. Considering that we are super happy with today’s result.

“Our substitutions worked really well after our poor start to the game, our defense performed very well and in offense we kept our patience. In the second half Kingi (Kinga Janurik ed.) stepped up big and denied several of Gyor’s scoring opportunities – it gave us a real push towards the end of the match.

“When we face Gyor we always try to make it really difficult for them.  The games against them are super exciting and so much fun.  The atmosphere in the arenas when we play against them is just fantastic and this year we got this opportunity three times.

“Of course, Gyor has to deal with the pressure most of the time as they always enter the match as the top favorite.  It does take the burden off our shoulders – still, we want to challenge them as much and as often as we can.

“Over the course of the last two seasons, it has worked out for us reasonably well (laughing) and speaking for myself, I would like to stay on this path.

“However, when you compare the rosters of the two teams you have to appreciate Gyor’s world-class talent. They are the top team on the international level.  But, it’s good to see that we can bother them and on occasion push them over the brink in a direct match-up.

“Actually, I don’t know what the plans are for the rest of the evening, but I am looking forward to some cold drinks and an ad-hoc party. The handball season is over  – for some of the girls it was their last match wearing the uniform of FTC and we ended up winning a title.  We won the cup – it’s time to party.”

“Let me tell you – this is not the first time that I play for a title this late in the season. But, in the last 2-3 weeks we trained like hell. No one really knows what hell is like, but now I do know how it feels.

“We worked so hard.  Every training session had a lot of intensity.  Gabor (FTC’s head coach Gabor Elek ed.) wanted us to be our best in this FINAL4.

“In the semifinal (against Siofok KC ed.) it was a tough game and in some way nothing like today.  We have to say ‘thank you’ to “Kingi” (goalkeeper Kinga Janurik ed.), who saved the penalties yesterday.

“Today, I felt OK all the time, even when were trailing by two or three goals early in the first half.  All we had to do, was to stay close to Gyor.  If we would be able to do so, things would turn eventually, as we played real good defense.

“After all that happened during this crazy season, my departure from Rostov and so on … I am so happy that we finish the season with this trophy.

“All I need now, is a festive night in Budapest and then some much needed vacation.  It was non-stop handball after the Olympic games, the regular season and a World championship in between. I will enjoy my free time, now.”