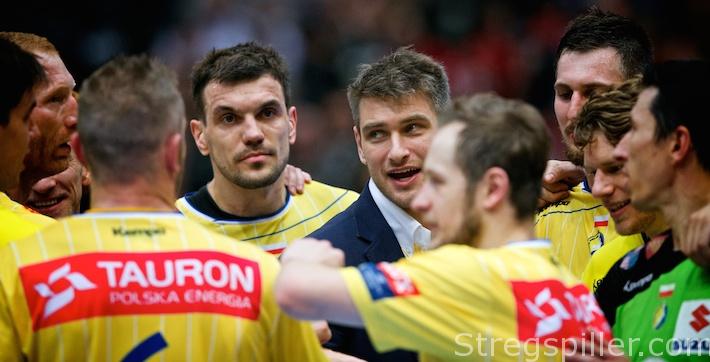 This game did not deserve a loser!

With the narrowest possible margin, Kielce secured their third FINAL4 ticket in history after a dramatic and controversial ending against Flensburg.

When you have secured a draw in the first leg and on the road, you are usually considered the favorite in the return match at home.  Still, it seemed a bit more complicated than that to predict the outcome of the meeting at Hala M.O.S.I.R.

Although it was Flensburg´s first appearance ever in the arena, the experienced players were unlikely to be intimidated by 4,200 fanatic Polish spectators, and Kielce did have certain problems on home court during this season.

To Flensburg, it was a question of coming to terms with Kielce´s 5-1 defense, while the Polish champion would need to minimize the impact of Holger Glandorf and Rasmus Lauge.  In the first leg the two back-court players combined for 18 of Flensburg´s 28 goals.

This game simply did not deserve a loser.  After an extremely close first leg in Flensburg, the return match turned into another nail-biting thriller, when the goal from Krsysztof Lijewski with 22 seconds left on the game clock, proved to be the decisive one, as Flensburg were robbed of a penalty shot in the dying seconds of the match.  The penalty could have sent Flensburg to Cologne.  Instead, Kielce became the first team to reach the FINAL4 this year.

The first 30 minutes in Kielce mirrored the 60 minutes in Flensburg four days earlier, as the distance between the two clubs was never more than two goals.

Once again, Kielce had some success with a very flexible 5-1 defense.  In addition, Kielce’s coach Talant Dujshebaev had replaced his usual first-choice keeper Slawomir Zmal for Croatian Marin Sego.  The move turned out to be a good choice, as Sego saved numerous Flensburg shots.

Kielce’s defense was particularly successful at containing Holger Glandorf who did not score at all before the break.  In attack, coach Dujshehaev obviously lacked an option due to Bielecki´s absence.  In general, the home team´s offense, did have trouble with Flensburg´s 6-0 defense formation, and in particular with goalkeeper Mattias Andersson.  Among several crucial saves from the field, the veteran in Flensburg’s goal stopped three penalty shots in the first half alone.

As the game progressed, both teams had problems sticking to their regular defensive lineup, as the two French referees, Thierry Dentz and Denis Reibel, served several two-minutes suspensions.  No less than nine times within the first half-hour did players have to take a non-voluntary break on the bench.

The flood of suspensions continued and for a moment it seemed to put Kielce at an advantage.  Ten minutes into the second half, Piotr Chrapkowski created the first three goal difference, as he made it 19:16 for the hosts.

But, Flensburg’s coach Ljubomir Vranjes answered by pushing his defense a bit more forward, and exactly five minutes later, Rasmus Lauge had re-established an even score at 21:21.

The rest of the match, the teams followed each other closely again until the gripping end.  Not even a 28:26 lead for Kielce with three and a half minutes left was enough to decide the matter.

Mattias Andersson,  Lasse Svan and Rasmus Lauge kept the guests in the game, and Flensburg came back once again, when Kentin Mahé equalized at 28:28 with a successful penalty shot.  But Lijewski´s goal moments later decided the match.  An obvious foul on Flensburg’s line player, two seconds before the final buzzer sounded, was not penalized.  Game over – Kielce became the first squad making it to the FINAL4 in Cologne.

Thierry Dentz and Denis Reibel (France) did not have the best night of their career.  Their refereeing missed a clear line and a degree of steadiness.  The sad climax of their inconsistent performance occurred two seconds before the end of the match, when they neglected to call an obvious penalty for Flensburg.  It is always regrettable, when a wrong decision by the referees becomes the game deciding factor.

Quite understandable as the versatile back-court player shot and scored from all angles.  Because of his nine goals, he not only became the highest scoring player of the match; he also played a crucial part in Kielce’s victory.

Kielce can prepare for the FINAL4 in Cologne- the club’s third attempt to reach the pinnacle of European club handball.

In contrast, Flensburg has to adjust and quickly focus on the German Cup FINAL 4 next weekend, despite feeling empty and some understandable bitterness because of the way they were sent out of the Champions League quarter-final.

Very tough loss today…somehow it wasn't meant to be…#Proud over the @SGFleHa team, we showed great #TeamSpirit and never gave up!

Hours of practice, 50 games and we get sent out like this! 😡 A pair of balls would have been nice! https://t.co/n7CT8s9Ewy

I really love handball,it has spirit and a soul like no other sport.I will fight all my life for this sport to be beautiful as it should be.