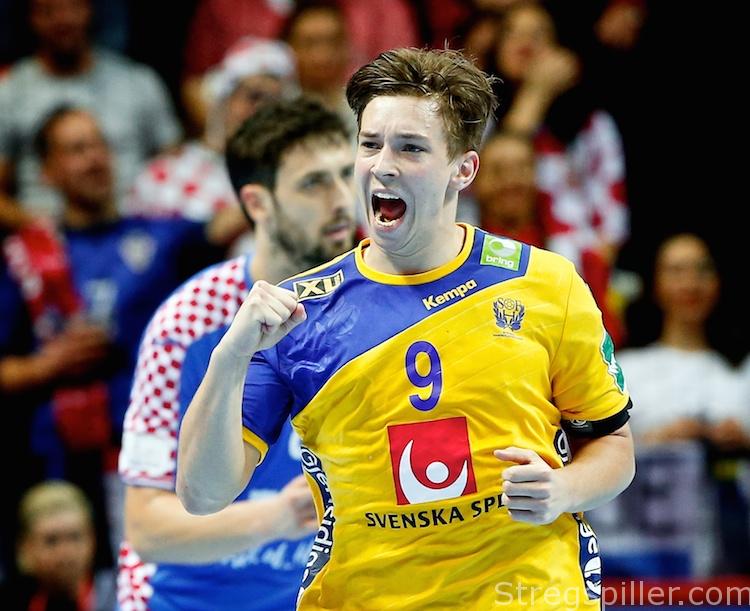 “What a game to play from the start”

NTERVIEW – For the first time at this European championship, Jerry Tollbring got his chance to play the start, as Sweden defeated the Croatian hosts35:31 in the last group match, on Tuesday evening.

stregspiller.com caught with a very happy 22-year-old, after the triumph.

It will be no wonder, if Jerry Tollbring thinks about Sweden´s 35:31 win against Croatia a bit longer than the rest of his teammates.

For the first time, at this European championship, did the 22-year-old left wing from Rhein-Neckar Löwen find his name in the starting lineup.   And he made good use of this opportunity, adding three goals himself.

“We got off to a good start and had a clear lead rather early in the match.

“In defense we did well and this gave us a lot of fast break opportunities, making life easier for us,” he explains.

“Our strong 6-0 defense and our fast breaks became deciding factors, allowing for some easy goals,” finds Tollbring who did not feel the pressure coming from 11,000 vociferous Croatian fans at Spaladium Arena.

“We did not feel any pressure from the crowd.

“Instead, they provided extra motivation – I do not think much about who the crowd is supporting.  I simply focus on playing my own game, and that’s what I did tonight,” says Jerry Tollbring who has spent quite some time on the bench at Rhein-Neckar Löwen this season.

“You must grab a chance when you get it!”

This Tuesday night, however, he got his chance and he took it with both hands.

“It is all about grabbing the opportunity when it presents itself.

“I think it’s a dream for any player to get a chance to play in a game like this.

“I really enjoyed every minute of it.  It was really cool to play tonight and be part of this triumph,” says Jerry Tollbring who is not the only capable handball player in his family.

His older sister plays for Larvik who are currently second in the Norwegian league and on top of their group in the EHF Cup.

Things have certainly changed for Jerry Tollbring and his teammates since their disastrous start in their opening match against Iceland, which they lost 26:24.

“Maybe we thought we were the  better team before the match against Iceland.

“After that game, it felt like we lost our nerves – we really had nothing to lose anymore.

“I think we are best, when we are the underdogs, and when we do not think too much about ourselves,” he tells stregspiller.com.

Sweden are taking two points with them to the main round, where they will be up against France, Norway and Belarus.

“After our defeat against Iceland, I did not even expect us to take two points to the next stage – so it is positive that we do.

“I think our chances in this particular main round group are good.

“We defeated Norway not so long ago; still they are usually good performers at championships, of course.