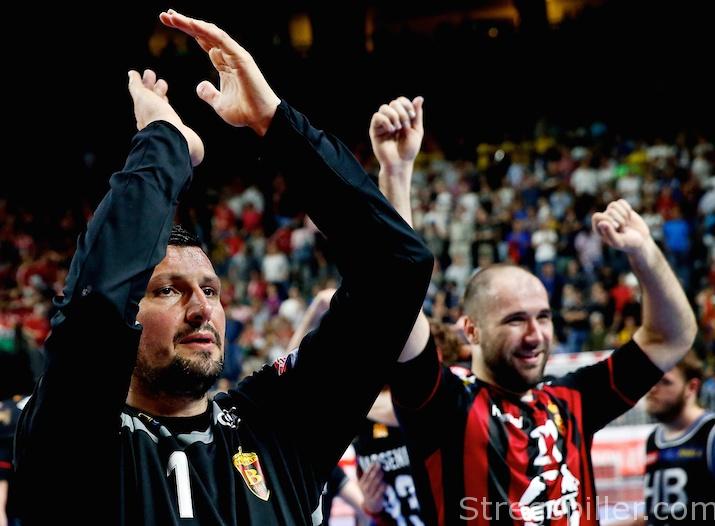 Ivan Cupic: “It’s all about Vardar”

Ivan Cupic knows the feeling of winning the Champions League very well after conquering the crown last season with his former club of Vive Tauron Kielce. But for the Croatian right-wing it’s all about the team, and not himself, as he claimed right after Vardar’s victory over Barcelona.

It’s the first time in Cologne for Vardar and the first final right away, a great start…

IC: Yeah, amazing start, but it’s not the end of course. We are happy and I think it’s going to be like this for the next one or two hours. I said maybe we played here for the first and last time, so we need to give it our best.

We need to show power to win tomorrow.  PSG is a great team, very international, they are the favorites against us. But it’s a final, it’s one match and everything is possible, so I hope we do well.

Our coaching staff prepared us the best they could and I think a final is not only about tactics. What we need to do is to play hard and show strength in our heads. I think we are a great team and we will show it tomorrow.

This match should be a huge boost to your confidence – you can’t be stopped, nothing can happen to you!

IC: Maybe it looks like that, but when you don’t lose a match for three, four month, when you win your league, the SEHA League or play well against Flensburg, when everything is going like a good plan, then you became confident.

As a team we got better and better but we cannot kill ourselves now because tomorrow (Sunday ed.) is a great match waiting for us. We need to be focused only on Paris, how to win it and how to take this trophy with us.

What do you have to do to beat Paris tomorrow?

IC: Everything. Not only tactically, but also physically. Tactically we know what we need to do, defense, offense, great goalkeepers on both sides, we need to show hard play, team play, spirit, we need to give everything what we have.

We have 16 guys , seven playing, nine on bench. We need to do our best, only that.

Nobody won the Champions League twice in a row, you could be the first man to do so…

IC: It’s not Ivan Cupic winning two times. It’s always a team. This time it’s Vardar, not only me. I want to win with them and then celebrate together – we are one team. I’m not thinking about myself, I’m irrelevant, you have 20 other guys and Vardar needs to win it tomorrow and I hope we do.

Kamil Syprzak made his debut at the Final 4 and it was quite an experience for him, but he was on the losing end after a last-second goal by Luka Cindric (Vardar).

How did you experience your first ever match at this event?

KS: Well, it was a great experience, but we lost the match. I had a different plan, obviously, but I hope it won’t be the last Final 4 of my career.

How difficult has it been to face this powerful Vardar defense?

KS: It was quite hard, but I think I was able to create some space for my teammates and some scoring chances. Later in the game there was more space because the they changed their defense, so I had more space personally.

You expected a tough match, how would you rate Vardar’s performance?

KS: Yes, we knew they would fight until the end. But I would like to add that it was good game, we lost in style. For sure, it’s very tough to lose like this, but it’s still better than losing by ten goals.

You were quite hard on yourself at the end of the first half, but generally you must be satisfied with your performance…

KS: There were some situations I didn’t like, obviously I missed two shots. But well, you can’t make all shots. They have a great goalkeeper who is two meters tall, he takes away a lot of space. It’s hard to score against him.

What about your motivation ahead of tomorrow’s match?

KS: Pfff… It will be tough to get up after today’s loss, but there’s one more game to go in the Champions League this season and we should win it.

Stole Stoilov: “We are no underdogs”

During the media call Stole Stoilov didn’t agree that there was a lot of pressure on Vardar do reach the final, or even win it.

Congrats on making it to the final, yesterday you said there is no pressure, but I think there was a little bit of it in the final seconds…

SS: Of course. You have a chance to win the Champions League so it has to be pressure, but Cindric was above it and scored the winning goal.

An amazing shot – were you afraid that you might have the same problem like Veszprem, which didn’t get a chance to a last shot?

SS: I wouldn’t say afraid, but obviously there is a possibility that you won’t take the last shot. But we have great players, who play very well one-on-one and the difference was all over the place.  I knew at some point we were going to get a shot. I’m very proud of my team and I hope tomorrow we’re going to surprise Paris.

What can you do that your emotions don’t take over?

SS: Listen, maybe the public says we are the underdog, but I disagree with it. I said before that all four teams have the same chance. It’s one game, who knows what happens.

What do you have to do the best against PSG?

SS: The same like today. Give the best, good defense and a good keeper, that’s the basics of handball.

What is the mood in your team after reaching the first final at the VELUX EHF Champions League FINAL4 in the club’s history?

SS: These guys are crazy – so there is a good atmosphere all the time.

Joan Canellas: “We have to play perfect”

It sounds a bit strange if experienced players are nervous, but that was the reason why Vardar had a tough start against Barcelona according to Spanish veteran Joan Canellas. To continue the big party in his new “home country” he requests a perfect match from his team against PSG.

You sat on the bench during those last seconds of the match. How did you experience the final attack?

JC: I was nervous, as everyone else. But you have no choice, you also have no chance to shoot. You just want the ball to go in, it can be a goal or not. We took a shot and it went in, so it was perfect.

When you win such a nail biter I have to ask, were you the better team today?

JC: Yes, I think we were slightly better in the end. In the beginning we were a bit nervous, Barcelona played better, but in the last minutes we were always in the lead. Obviously there was no big difference between the two teams today.  In games like this it is only about details. Now, we are just happy and satisfied. But tomorrow we have one more match and we have to think about PSG.

You’re new in Macedonia and to this club. But I guess you are able to tell what it means for Macedonia that you reached the final?

JC:  Well, Vardar has a women’s team that is used to reach the Final 4, so for us it was an honor to finally do the same. We fought hard to make it to Cologne and in the end we did it. I think most people didn’t believe we could beat Barcelona. The country, the city of Skopje, I’m sure everybody watched the match. Tomorrow, I hope we can win again – the whole country is supporting us. When we played against Flensburg we already felt what it meant to them, when we got this extra energy. It’s a great experience and I hope it continues tomorrow.

What do you have to do better on Sunday, so the chances will increase for having a big party in Macedonia?

JC: I think we have to play 60 minutes without being nervous. We made a lot of technical mistakes and maybe you didn’t see it, but the coaches know that we didn’t do everything in a perfect way. On Sunday, we have to play perfect, otherwise we won’t have a chance against maybe the best team in the world.