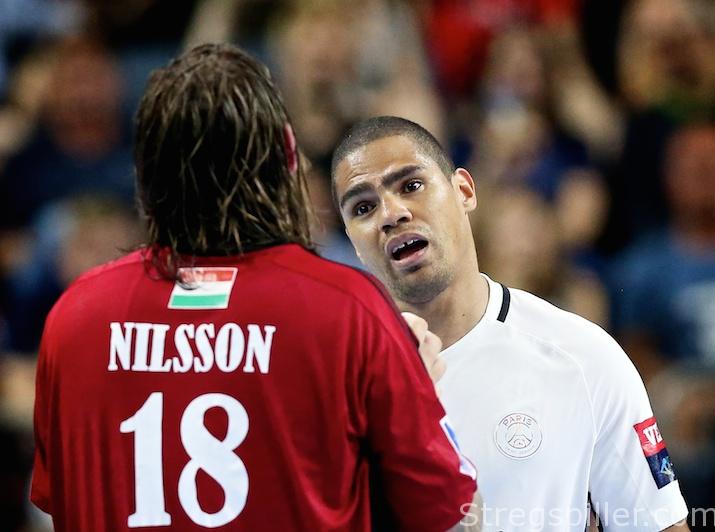 Here is what players had to say after a dramatic Day 1 of handball at the VELUX EHF Champions League FINAL4:

The loss against Paris was a tough pill to swallow for Veszprem’s Andreas Nilsson. The usually outspoken Swedish line-player hardly found words for the defeat against the French champion.

What kind of words do you find for the match?

AN: It was a hard game. We played well, Paris played well. In the end the game went Paris’ way, unfortunately.

I think you were the better side…

AN: I agree that we played well, but Paris is also a very good team. Before we said that it’s a 50-50 game and now they won.

Why was it so difficult to get an open shot during that last attack?

AN: We were trying to use the seventh player and we trained it, especially getting a free shot from close range, but it just didn’t work out!

Jesper Nielsen: “We had more pace in our attack”

A French team has reached the final of the Champions League for the first time in 14 years and PSG’s Jesper Nielsen is enjoying his ride with the team.

It was a huge fight…

JN: They are a very strong – physically extremely strong team. That’s why it was so tough to beat them.

What made the difference?

JN: I think we had more pace in our attack. We ran a bit more than they did and then they were just a bit more tired than us.

JN: It was fun to play and help the team in a big game like this, it was fun.

How did you experience playing between the big Veszprem defenders?

JN: They are big, they are bigger than me, so it was tough, but, as I said, much fun.

What about Thierry Omeyer’s performance today?

JN: I think he played very well. In the end we had more saves than Veszprem had, at least it feels like it.  That was obviously a huge part of this win as well. He just prepares himself very well and is a true professional. It shows in the game.

So what do you think about your possible final opponents, Barcelona and Vardar?

JN: Both teams are very good. I haven’t played against Vardar yet, so I don’t know them that well, but with Arpad Sterbik in goal it’s always difficult. Barcelona is just a very good team. But as always, I think the goalkeepers will make the difference, either Sterbik or Gonzalo Perez de Vargas.

Momir Ilic: “We should have just taken a shot”

Serbian superstar Momir Ilic is known as one of the best shooters in the world. However, with Laszlo Nagy and Aron Palmarsson on the court as well, his team was unable to create one last shot in the dying seconds of the semi-final against Paris.

What was the difference today between your team and PSG?

MI: Small things, just many small things. They were better organized on attack. Especially in the second half we played a lot of one-on-ones, mostly individual plays and they just did a better job at defending.

Were you too tired in the end?

MI: Possible, yes. We didn’t make a lot of changes, they had some players who came from the bench to help them, so yes…

Why was is to difficult to find a solution in that very last attack?

MI: We just didn’t execute well enough. There were 20 seconds left in the game. We should have just taken a shot and that was the problem, in the end.

Luka Karabatic: “We knew it would be a battle”

Luka Karabatic played a big part in PSG’s run to the final, as the French defense side shut down Veszprem in the closing seconds of the first semi-final of this year’s EHF Final 4.

Congratulations on making it to the club’s first ever final at the FINAL4 – was it a very tough battle?

LK: Thanks first of all. Yes, it was what we expected. They are a very good team, they also have a lot of experience because they have been here before. We knew we had to respond in physically, we had to be strong in defense. That’s where we succeeded today. We played good defense, but in the last minutes we executed some good attacks, as well

What about Vardar and Barcelona, your possible opponents tomorrow?

LK: Well, for Vardar it’s the first time here in Cologne, so we are going to see how they will react in this kind of environment. But I think they are dangerous, because they play a little different than the other teams with their 5-1 defense and with a great goalkeeper behind it. They have a good chance of winning the Final Four, actually.

And when it comes to Barcelona, they have a ton of experience, they have been here so many times, and  they won the tournament twice before. They are the favorites to win it all. They finished first in the group, they have a lot of quality. So we have to prepare well – still it will be a real tough game for us tomorrow, whoever we will face.

Mikkel Hansen: “We are ready for the final”

He is maybe the biggest pop star in handball, still Mikkel Hansen takes his time to answer the questions of all journalists. He stopped by to talk about the match against Veszprem, and what he is expecting from the final match, on Sunday.

Congratulations of having reached the final. I think it was one of the most physical gameses in recent history, do you agree?

MH: If it wasn’t physical it would be strange, no? We are playing for a final in the Champions League, so everybody is here for the win. It was expected to be a tough game. Then it’s the small things deciding if you’re going to win or lose. It was the same today, going down the stretch.

I think you had some trouble creating chances in 6-against-6 situations, would you agree?

MH: Yes and no. I think in the first half we had some difficulties, but in the second half we managed to do a better job on the offensive end. I think we can say we are just happy after getting the victory. Now were are ready for the final.

What suits your playing style more, the 5-1 defense of Vardar or Barcelona 6-0?

MH: For us it doesn’t really matter. My focus is not who’s going to win. We will just wait and see. Both teams have a different strategy – defensively and offensively. But I think the next game will be as tough as the one we had today.  It will be very close.