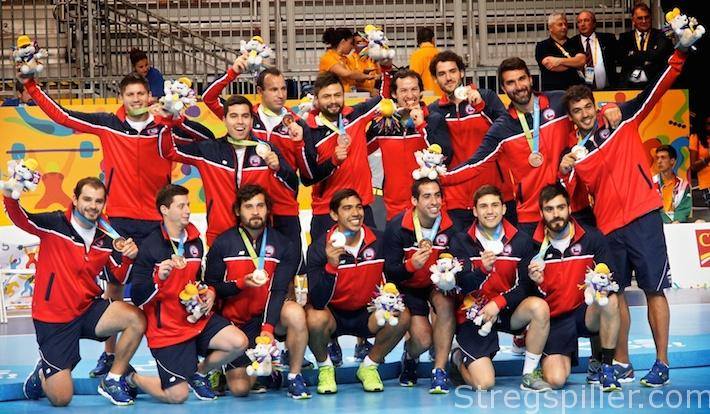 Seeing the otherwise tough guy Matteo Garralda in tears of joy after leading Chile to their first win ever at a World Championship stirred up memories.

As a player, Matteo Garralda was known as one of the toughest around.

Therefore, it was surprising to see him break down in tears on the bench after Chile´s 32:28 victory against Belarus, in Rouen, on Friday afternoon.

On a second thought, it was not so astonishing after all.  Matteo Garralda has always been a very passionate man, especially about handball.  And leading the team to its first win ever at a World Championship was undoubtedly his greatest triumph in his coaching career, until now.

The first time I met Matteo Garralda in person, his playing career had already reached its sunset stage.  At the age of 38, he joined KIF Kolding (these days known as KIF Kolding Kobenhavn) and his three years in the Danish top club were no success, if you look at his performance on the court.  His time at Denmark’s top club was hampered by frequent injuries.

Still, Kolding might not have won the Danish championship 2009, had it not been for Garralda´s passion and experience.

As some kind of coaching apprentice besides being a player, he was a great asset to the team, transferring his emotions to his younger teammates and giving advice based on a long and successful career.

And a success he was.  In attack, he was one of the best right backs the world has ever seen, probably only surpassed by Icelandic Olafur Stefansson.

And in defense, he was one of the toughest, not always fair, but certainly a very efficient player.

I interviewed him several times during his years in Kolding.  In the very first interview, I asked him what had taken him as far north as Denmark and Kolding.

“I always wanted to learn, and now I want to learn about Nordic handball culture,” he answered.

“Unlike our rather individual way of playing in Spain, you practice a much more collective method of handball in Scandinavia, and I want to get to know this style too,” he added.

When watching Chile play, I noticed that he has been able to implement a rather fine combination of both processes of playing handball in the South American squad.

Furthermore, he certainly appeared having “infected” his players with his passion – it was obvious throughout the match.

Just one more win – which may very well come in their last group match against Saudi Arabia, on Friday – will probably suffice for Chile clinching an eighth-final berth against Denmark, most likely – the very country where Garralda finished his career at the top level as a player.  He probably would not mind.

While he was in Kolding, I also asked him about the difference between Kolding and FC Barcelona, the Spanish elite club he won the Champions League with five times.  He answered with one word: “Money!”

How much money he can work with as national coach in Chile, I do not know, but judging by his and his players´ reactions after the final whistle against Belarus, that win was worth something that could not be bought with all the money in the world.

I am very much looking forward to watching coach Garralda and his men as the tournament progresses.