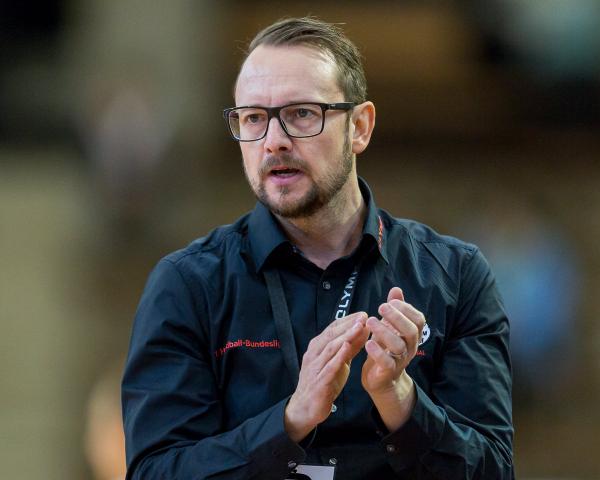 “A German team in the women´s FINAL4 is not unrealistic”

INTERVIEW – The world of handball should not be too surprised seeing a German team in the FINAL4 of the Women´s Champions League in the foreseeable future.  At least not according to Martin Albertsen, Danish head coach of German champions SG BBM Bietigheim.  He would not exclude his own team to go that far, in a few years.

A German team in the FINAL4?

That would have to be in the Men´s Champions League, would it not – and even there, it has been difficult enough for German clubs to reach the final stage of Europe’s top club competition.

As a reminder, the 2017 FINAL4 in Cologne was carried out without German representation – for the first time in the history of the event.

Yet, we should not be surprised seeing a German team in the FINAL4 of the Women´s Champions League within a few years.

At least if you ask Martin Albertsen, the Danish head coach of German champions SG BBM Bietigheim who are entering their maiden season in the 2017/18 Champions League.

“Of course, for us there won’t be a FINAL4 participation this season.  We have to be realistic, but when I look at how the Women´s Bundesliga (HBF) has been developing in recent years, I would definitely not rule out the possibility that we or another German team would make it to the FINAL4 within the foreseeable future,” says Martin Albertsen who just started his fourth season with the South German handball powerhouse.

“However, in leagues like the Bundesliga – and the Danish league, where I come from, for that matter – top teams are challenged much more in a physical and mental sense throughout the season relative to other premiere teams in European handball.

Those teams play in what I would call “Walk over Leagues” where they are not put to the test on a weekly basis.

“Instead, they can focus on the Champions League, which often defines their season.

“In November, for instance, we can look forward to a week, when we will have a Bundesliga match on Wednesday against Thüringer – probably a top match –and then a Champions League game the following weekend.

“Furthermore, because of the distances in Germany we often spend 10 hours traveling to opponents away from home.

“Very few teams in other leagues are subject to similar physical strain.

“Moreover, it costs considerably more money to build a European top team in Germany or in Denmark, than it does in Eastern Europe, simply because of the huge difference in taxes.

“Finally, TV money is not an income source that we know here, and national sponsorships are also almost unknown.

Women´s handball in Germany has certainly not been spoiled with success on the European stage in recent years.

Apart from Bietigheim reaching the EHF Cup final last season, major stories have been few and scarce – and when it comes to the Champions League, a couple of main round berths for Thüringer HC have been all Germany could boast about.

“Of course, we would like to bring new pride to German handball already this season, but we have to realize that it will be difficult, being debutants in the tournament.

“We are breaking new land just like last season, when we had our European debut in the EHF Cup,” says Martin Albertsen.

Unlike the club, he is no newcomer in the Champions League.  Having been there with Leipzig as well as with Danish Viborg HK, he knows what it takes.

“We know that this season will be tougher physically and mentally than anything we have been used to, and we try to prepare for it in every way we can,” acknowledges Martin Albertsen who could celebrate his second German championship this past spring.

The first trophy he lifted 11 years ago, when he was coach at HC Leipzig – a club whose “obituaries” you could recently read here on stregspiller.com.

His triumph with Leipzig earned him the award of “Coach of the Year” in Germany in 2006.  But his journey with Bietigheim over the past three years seems even more amazing to the 43-year-old Dane.

“When I took over, we were at the bottom of the Bundesliga, and now we are in the Champions League after winning the German championship in style and reaching the EHF Cup final last season already.

“When I started in this club, pundits did not give me much of a chance to be successful with this team of individuals that we had gathered here.

´Hey coach, you are never going to get anything out of this bunch of princesses, ´was the general comment I got.

“I do not hear that kind of comment any longer!”

“Money did not make our success”

Martin Albertsen and Bietigheim receive some other kind of feedback these days, instead.

The reason why Bietigheim won the German championship in 2017, way ahead of second placed Thüringer HC, was the fact that money is not really a problem in the club from the Stuttgart area – at least this appears to be the general impression.  People think that Bietigheim can acquire any player they want, more or less.

“That is not true,” claims Albertsen.

“In fact, I do not think there is any difference between the four top clubs in Germany when it comes to financial resources.

“Teams such as Thüringer and Metzingen probably have pretty much the same budgets as us, and in Dortmund, plenty of money flows from the football department to the women´s handball team – the only difference, Dortmund have not been able to make these investments pay off yet.

“Instead, I think our success is due to the fact that we have been better in making our players work together towards the same goal.

“Furthermore, we have been successful at integrating players who have been less successful in other European top clubs, but have managed to restart their career again.

“We have acquired players from Gyor and other premiere clubs who found new handball happiness in Bietigheim.

“We have been able to instill a hunger for success in our players, and we have been successful in satisfying this hunger – last season by winning the German championship and reaching the EHF Cup final – this season by playing the Champions League,” explains Martin Albertsen who expects difficulties staying on top, though.

“Making a ´carbon copy´ of last season and winning the German championship in the same way will be more than difficult, considering the quality of our rivals and the way they have been reinforcing their teams – and we will be the opponent they will all be keen on beating.”

A happy Dane in Germany

In his coaching career, Albertsen has been commuting between Denmark and Germany a couple of times.

Between his jobs in Leipzig and Bietigheim, he was in charge of the Danish top clubs Randers HK, Viborg and København Håndbold.

He feels well in both countries, but he sees an important advantage in working with German clubs.

“Compared to Danish league clubs, where coaches, directors and board members change way too frequently, there is much more continuity in German clubs, and in my opinion, that is one of the reasons why women´s handball in Germany is progressing these days.

“With a few exceptions such as CSM and Vardar, I also see continuity as a crucial key to success for the top clubs in European handball.

“Gyor is an outstanding example of continuity when looking at the position of head coach as well as management, and the same kind of steadiness has been the reason why a club like Larvik has been successful for so long,” says Martin Albertsen, before mentioning another key reason explaining his own, personal success as coach.

“I never had any real, major disappointments.

“In Leipzig, Randers, Viborg and København, I generally experienced successful seasons, and that has given me a certain confidence and inner calmness.

“It is also important having my family with me, where I work as a coach.

“They are happy here, and when my family is happy, I am happy too,” says Martin Albertsen.