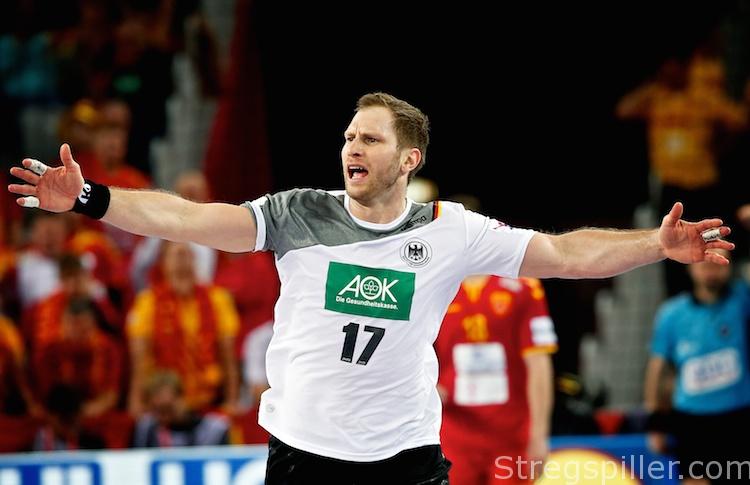 FEATURE – Finn Lemke, Patrick Groetzki and Steffen Weinhold can all agree on one thing: Improvement will be needed in the upcoming main round matches, if the ruling European champions are going to have a chance to defend their title.

The three key players of the German national team have no problems agreeing on at least one issue ahead of the main round games at the European championship in Croatia:

Improvement is needed compared to their performances during the group phase, where Germany recorded two points.

“I think we still need better decision making,” finds defense specialist Finn Lemke who was called up ahead of the last group match, when Germany drew 25:25 against FYR Macedonia.

“Determination – we need to be more determined, and this applies to all aspects of the game. In the match against Macedonia, we often had our fingers on the ball, but still could not intercept it.

“It is such details that decide a match in the end,” finds Finn Lemke.

“We will probably need to win all three of our main round games in order to reach the semi-final.

“To do it, we do not only need a good game plan. We also have to stick to it.

“If we can do this, we will win,” predicts the tall player from MT Melsungen.

The first challenge, awaiting Germany in the main round, is the Czech Republic – the team from Eastern Europe is the surprise package of the tournament, a role Germany enjoyed at the European championship, two years ago in Poland.

“The Czechs have surprised me a great deal with their two wins against Denmark and Hungary.

“However, that’ll make it so much nicer to play against them.

“They will be full of self-confidence, but we know many of them from the Bundesliga, where a number of Czechs have playing for several years, now.

“They probably suit our way of playing handball a bit better than the teams we have met until now, and I believe it can be a really attractive game.

“Right now, the Czechs are the only opponent I want to think about and I will not focus on Denmark and Spain until after this match,” states Fin Lemke.

“Each of our three matches in the main round will be like a final.

“I do not think we can afford to lose anyone of the three games, if we want to reach the semi-final.”

Right wing Patrick Groetzki is in no doubt about reality, if the so-called “Bad Boys” should not turn into “Sad Boys” at this European championship.

Groetzki is fully aware that his team will have to step up in order to accomplish a semi-final appearance.

“There is no doubt about it. We have not been at our best level yet, and we have not played the way we wanted to.

“All our opponents in the main round are strong teams, of course, but Denmark and Spain represent world class and have been doing so for years. In order to beat them, we have to be at our maximum and this means that we will have to improve considerably, compared to our performances so far,” admits Patrick Groetzki towards stregspiller.com.

He is also prepared for three opponents with different style of playing handball than the three Balkan teams – Montenegro, Slovenia and Macedonia – which Germany met during the group phase.

“At least, our defenders will not have to wrestle with just as heavy line players as they did during the group phase.

“This could mean that we will not lose as many one-on-one encounters anymore; instead our upcoming opponents have many other qualities – such as playing a much faster handball.

“In our last group match against Macedonia, each attack lasted more than a minute, at least that’s how it felt.  That is going to change in the next games,” expects Patrick Groetzki.

“We are in for three wide-open matches,” expects Steffen Weinhold whose eight goals played a crucial part in Germany´s 25:25 draw against Macedonia on Wednesday evening.

“In our main round group, almost all teams have two points. There is one nation with three and another one with just one point, obviously it makes this group very unpredictable,” finds the experienced player from THW Kiel.

“The Czech Republic – our first opponent – have been playing free of any pressure, as they do not really have to meet any expectations.

“This way, they have been able to surprise us all, and it won’t make our task any easier, of course. We will simply have to use all the quality we have. If we do that, we are better than the Czechs,” thinks Weinhold who has considerably more respect for Germany´s two opponents that follow, Denmark and Spain.

“Of course, they both represent huge challenges.

“Both are top handball nations, and the two matches will be extremely difficult. No doubt, we will have to improve even more against them,” expects Steffen Weinhold.