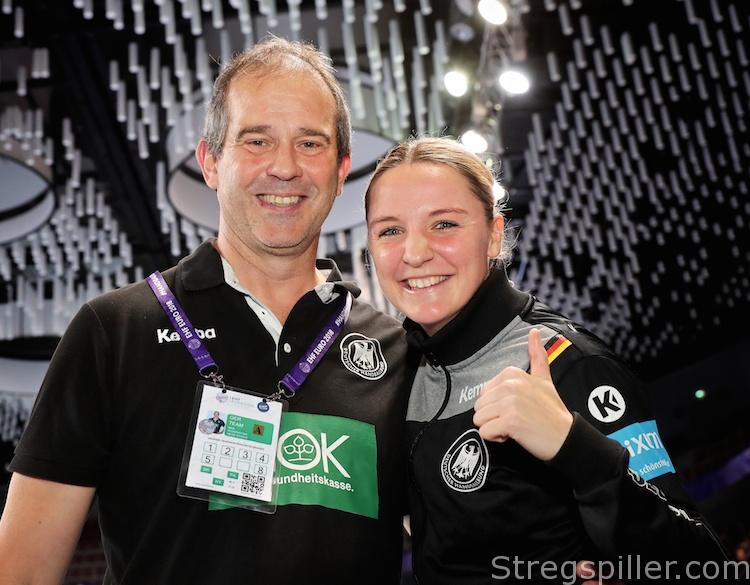 MATCH REVIEW – According to Angie Geschke, Germany didn’t want to play a catch-up again, yet this was exactly what they had to do in the match against the Czech Republic.

*A win or a draw would send Germany to the main round and the Czech Republic back home.

* In case of a Czech victory, both teams would have to wait for the outcome of the following game between Norway and Romania.

*To Germany, the day was special, as it was exactly 25 years, since a reunited Germany won the Women´s World Championship back in 1993.

An early injury to star player, Iveta Luzumova, played an important part, as Germany booked their main round ticket at the expense of the Czech Republic.

Germany showed great moral, while catching up with a five-goal deficit late in the first half. After the break, the women of coach, Henk Groener, returned to the pitch much more focused and did not allow the Czech’s to dominate the game, as they did for quite some time during the first 30 minutes.

Both teams got off to a nervous start and after eight minutes, it showed on the scoreboard as only three goals were recorded.

It was at this point, when Germany´s coach, Henk Groener, took a first timeout as his crew was trailing 2:1. Iveta Luzumova had converted two of her penalty shots, successfully.

After the timeout, the teams followed each other closely, before the Czechs took off.

The day before the game, Germany´s all-round player, Angie Geschke, told stregspiller.com that her team didn’t want to catch up with a deficit again but that’s what happened.

The Czechs went ahead by as much as five goals (12:7 and 13:8), and not even Luzumova’s elbow injury seemed to interrupt their rhythm.

However, Germany fought back hard and by half-time Behnke & Co. had caught up (16:16), but it came at the expense of two timeouts.

Germany continued where they left off before the break, and four minutes into the second half Marlene Zapf handed her team their first lead at 18:17.

Luzumova had returned to the pitch towards the end of the first half already with her left arm taped, but as she shoots with her right hand, she remained a threat in the attack of the Czech Republic.

However, as the match went on it became quite clear that she couldn’t get it all done on her own, and when the Czech’s 5-1 defense became less and less effective, the difference between the two teams was clearly visible.

Germany took a four goal lead and when Marlene Zapf – there she was again – made it 30:25 with less than three minutes to play, it meant game over.

“I am not really sure what pushed us that were able to catch up the 5-goal deficit by half time, already.

“However, we are a team and as a team we fought our way back.

“Sometimes, it only takes one action to change a game. I am not sure which action it was tonight, but we stood together as a team. That’s the bottom line.”

“We got off to a good start and defended well, but then Iveta Luzumova got injured, and that hurt our defense, especially. And, on the other end of the pitch it took the pace out of our attack, even though she returned after a while.

“I’d say that this was probably the main reason, why Germany got back into the game, as we were already leading by five. Anyway, now we have to go home.

“Right now, we are very disappointed, but we will be back.”

On Thursday, Germany will make the move to Nancy and play in Group II, carrying two points to the main round, while for the Czech Republic the tournament has ended.