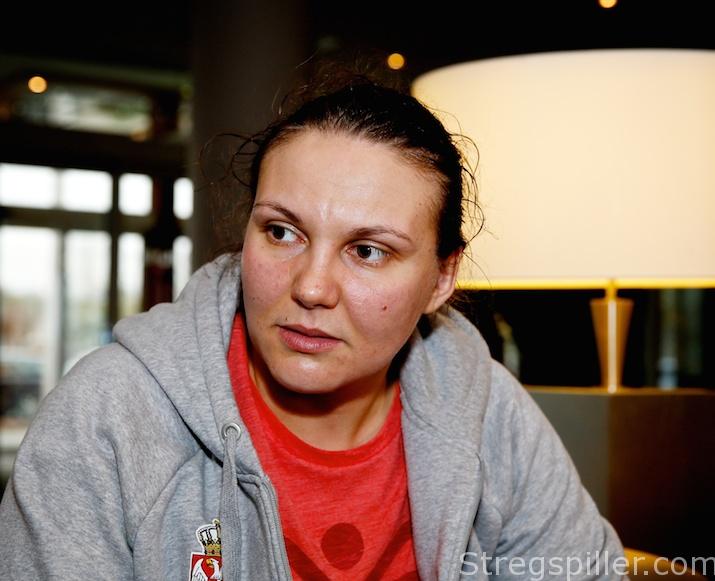 “Germany will be our first real game at the World Championship”

INTERVIEW – Serbia´s world class line player, Dragana Cvijic, talks to stregspiller.com about her team´s chances at the World Championship, about her recent transfer from Buducnost to Vardar and about playing with Andrea Lekic again, at club level as well as in the national team.

Disposing of China and Cameroon in their first two matches at the 2017 World Championship was no real challenge to Dragana Cvijic and her Serbian teammates.

Tuesday, however, the German host will be awaiting Serbia at Arena Leipzig, and for Cvijic, this will be the real start of the World Championship.

“We started well, and we were rewarded with two big wins.

“However, we came here to play against opponents like Germany and The Netherlands, and now we want to show that we can match these teams.

“The team with the best defense will win these matches; we are very aware of it, and this will be our key to success.

“Our game against Germany tomorrow will be our first real match in a – hopefully – long row of matches at this World Championship.

“Another reason, why I am looking forward to this game is that the hall will be at capacity, and I love to play in front of a packed arena.

“It gives me extra motivation, and I can hardly wait for this game to start”, says the 27-year-old line player from HC Vardar Skopje.

“The fact that a full house will be supporting our opponent does not bother me at all. To me, it is important that the hall is full.

“During a match, I do not even notice who supports Germany and who is for Serbia. I am just being influenced by the atmosphere in general, and to me, that’s what matters”, says Dragana Cvijic who recently rejoined the Serbian national team along with such other stars as playmaker Andrea Lekic, left back Sanja Damjanovic and goalkeeper Katarina Tomasovic.  Some of the pundits even see Serbia as one of the dark horses for the title.

“It would be nice, and such expectations are flattering, but we go step by step.

“We did not have good experiences in our two most recent championships and we certainly did not play well enough at the 2016 European championship, especially not against the better teams. And therefore it is nice for us to get this chance to do something for handball in Serbia,” she says.

Dragana made a change with regards to where to play handball ahead of this season, as she left Buducnost (Montenegro ) to join Vardar Skopje.

“I moved from Buducnost to Vardar, because I felt that I had spent enough much time in Buducnost.  I had been there for six years, and I wanted to try something new and and win the Champions League with a new team.

“And I think I am on a good road for doing just that. We have had a very good first part of the Champions League season, and I believe that we will play very well in the main round.

“One particular reason why I like to play in Vardar is that we have many players from various Balkan countries. With some of them I already played during my time in Krim Ljubljana (2009-11, ed.) and I enjoyed it very much

“In Vardar, I also play with the best back court line in Europe.

“We did not need much time practicing, before we had the right feeling for each others moves. And this makes me happy.”

Olympics are the goal

As mentioned above, Dragana Cvijic and several other players have been absent from the Serbian national team for various reasons, but they are all back now.

Cvijic explains her own thought process that led to her comeback to the national team:

“I want to go to the Olympics. In my opinion, this is the most important event for a professional handball player, and I believe we can qualify for the Olympic Games in Tokyo in 2020.”

Another player who recently returned to the national team is Andrea Lekic, whose is also a teammate of Dragana Cvijic in Vardar.

The cooperation on the pitch between the two of them has been amazing from the start.

“Andrea is a very smart player, and we never have to spend much time playing together before she finds me on the line.

“She feels handball, and I feel the way she plays – I always understand what she wants me to do.

“I am happy that I have the chance to play with her on the club level as well, and I am sure that the way she and I know and understand each other will also benefit the national team.

“We will be much better with her back in the team.

“She has not practiced handball for a while because of her injury, that is true. But, I am sure she will feel the rhythm of our game very fast, as she is a very smart player.

“Andrea will not need much time to be at her best,” expects Dragana Cvijic.