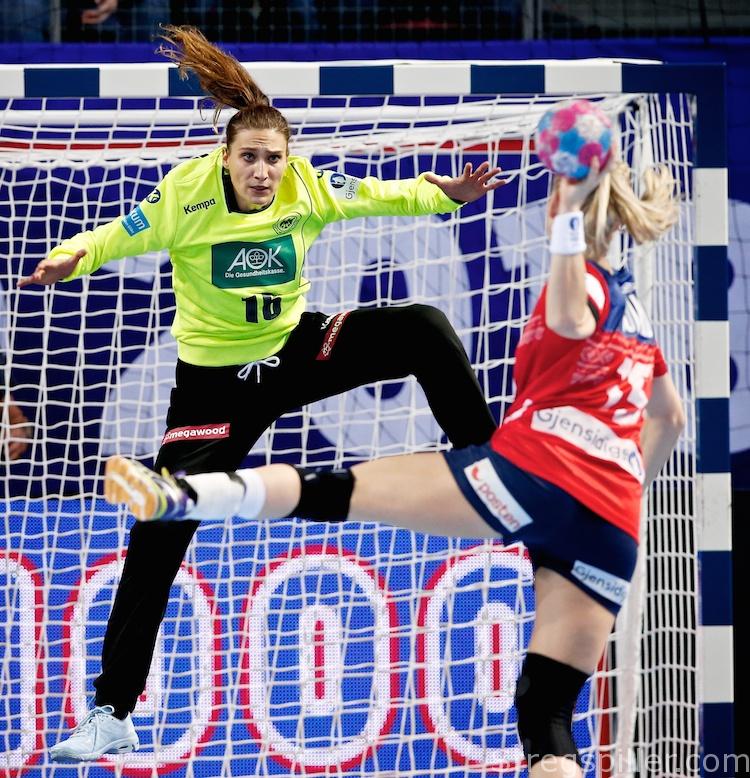 MATCH REVIEW – It may have come as a surprise, when Russia defeated the French host 26:23 in the opening match, but Germany´s 33:32 against mighty Norway belongs in a category of its own.

*Norway were missing left wing, Thea Mørk, due to injury, which meant that Sanna Solberg had to do the heavy lifting. Ahead of the game, head coach, Thorir Hergeirsson, indicated, that he may try youngster, Henny Reistad or even line player, Heidi Løke, as possible substitutes.

*Germany´s Dutch coach, Henk Groener, was able to send his strongest squad, considering the dire circumstances of missing, Kim Naidzinavicius, who sustained another long-term injury right before the tournament. Alicia Stolle and left wing, Angie Geschke, were in doubt but both names appeared on the team sheet.

Emily Bölk put on the finishing touches, when she scored the winning goal 23 seconds before regulation time and goalkeeper, Isabell Roch, stopped a last ditch attempt from right wing.

For one, the Norwegian favorites were unable to shake off Germany during the first 30 minutes.

The Scandinavians were leading by one- or two goals several times, but the German squad resisted any increase of margin successfully.

On the other end of the court, Norway’s defense did not appear as tight as usual and not even Silje Solberg’s 41 save rate could prevent Germany from scoring 15 goals before the break.

When Thorir Hergeisson sent on Emilie Hegh Arntzen as left back, he seemed to have made a golden move with less than 15 minutes left to play. Arntzen scored on her first four attempts and had a significant role in Norway taking their biggest lead at 11:8 in the first half.

But as mentioned before, it did not take long for Germany to come back, and three minutes later, the scored read 11:11 again.

Eventually, Germany’s defense found a way to control Arntzen as well, and for the rest of the half the two teams traded goals before changing sides at 16:15.

When Norway can’t get their fast-break goals, they tend to turn into an ordinary team.

France administered this lesson in the final match of the World Championship, a year ago. And, a vigilant German team confirmed the aforementioned on Saturday afternoon, in Brest.

Norway opened the second half with some more two-goal leads, but they could not create a meaningful gap between them and a well-prepared German team.

Instead, Germany took the lead, when Emily Bölk made it 24:23, twelve minutes into the half.

Now, the crew of coach, Henk Groener took the initiative and Xenia Smits handed her team their first two-goal advantage in the match (25:23).Germany stayed ahead but the favorites turned the game around once again when Stine Oftedal made it 31:30.  It should be Norway´s last lead.

Emily Bölk and Alicia Stolle pushed back (32:31), before Henny Reistad – who justified every bit of court time she got – drew even.

With 23 seconds left, Bölk showed no nerves, scoring on a powerful jump shot, making it 33:32. In the dying seconds of the game, Isabell Roch denied Malin Aune from right wing and the celebrations began.

“I don´t know if I’ll call it a sensation. Others must decide – I don´t want to qualify the game, not yet.

“The win may have come unexpected, of course, but right now, we are just happy about the two points.

“We are a young team and we were able to play without pressure and I think we benefited from it.

“We were more relaxed than Norway because no one expected anything from us.

“I also think that this approach was the reason, why we managed to keep a cool head in a tight finish.

“I think, I speak for the entire team, when I say that from minute one to minute sixty, we were determined to fight for each other, and this by and large explains the result.”

“Our defense was simply not good enough.

“It was not a matter of converting our fast-breaks. 32 goals should always be enough to win any game.

“We were simply not good enough, and that’s disappointing.”

“It’s hard to say why we could not get our defense working, today.

“It worked fine at the “Møbelringen Cup” just before the championship, and it also functioned well in our other preparation games – so it really is a puzzle, why we couldn’t get it done today.

“Germany did not come up with anything that surprised us, so we’ll probably have to watch some video to find out what actually went wrong and how we get back on track.

Germany will try to ride the wave of this triumph, when they meet Romania, on Monday, while Norway will have to rise from the ashes against the Czech Republic.