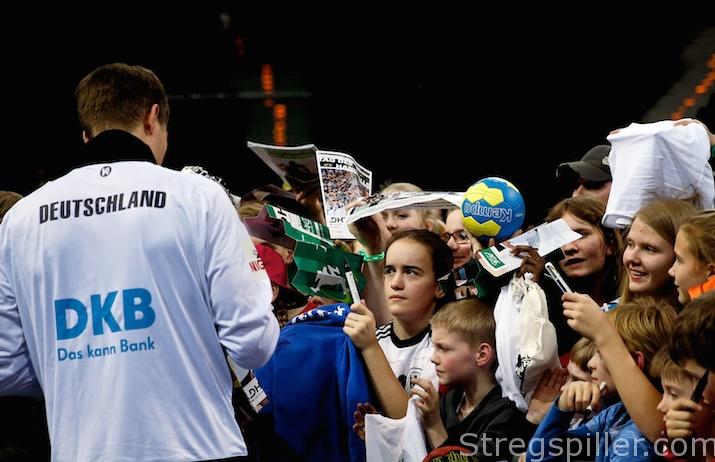 A (Global) Day of Handball?

While football is basically dominating all headlines in Germany, other sports have to come up with smart promotional ideas.  In 2015, Rhein-Neckar Löwen did a great job using the “Tag des Handballs” (Day of Handball), to fill, almost, the entire football stadium of Eintracht Frankfurt.  A lot of activities around the game offered kids as well as grown-ups a great chance to get into contact with the sport and maybe catch fire and start playing.

Last weekend the German handball federation hosted the second edition of the event in Hamburg’s Barclaycard Arena.  More than 10.000 fans in attendance made the event a major success.  Everyone I talked to told me that especially the youngsters enjoyed their time in Hamburg.  I think it was very smart to have both the women’s and men’s national team play, because the female side of the sport isn’t big in Germany at all, like in most other countries.

But there’s a World championship to promote, actually two world championships, with the Women’s edition happening first in December, while Germany will share the men’s tournament with Denmark in 2019.  Both teams – women and men – have young promising faces to offer.  Emily Bölk is just 18 years old herself, she could have easily been sitting in the stands.  Obviously she was on the court when Germany faced Sweden.  Coming from near-by Buxtehude she enjoyed the day to the fullest.

“It was a very emotional event, also for us players.  We hardly play in front of that many people and it was just a lot of fun.  Especially when they played the national anthem it was quite emotional,” Bölk said.

Stefan Flomm, a well-respected colleague of mine, was on location as well and and he told me that the atmosphere was as good as it could get for the kids, including his 12-year old daughter.  And that’s fantastic news, if you ask me.

Flomm is skeptical that such events can be hosted every year, because of logistical reasons.  But I tend to disagree with him. It’s all about finding the right venue and the right time.  Events like this have to be hosted more regularly and should become part of the international schedule.  Yes, the Golden League might generate a lot of revenue, but imagine a global “Day of Handball”, when all major national teams, men and women, are involved!

Kids around Europe, and not just them, would get in touch with handball because it’s present everywhere.  Social media would be flooded with pictures and videos of the games.  Let’s have France play Spain in Paris, Croatia play Slovenia in Zagreb or Poland play Hungary in Krakow.  These type of events make handball big on a much larger scale.  One year later the teams could face off in Barcelona, Ljubljana and Budapest.

Most importantly the stars have to be present.  Unfortunately Germany rested a lot of stars, like Uwe Gensheimer, Andreas Wolff or Hendrik Pekeler. Sweden did the same, fielding only players from the Handball-Bundesliga, except for Per Sandström, the former goalkeeper of HSV Hamburg.

It looked better on the women’s side with stars like Clara Woltering, Anna Loerper  etc. all on deck and those players that were injured watched from the sidelines.  And it certainly does not get much better when having the opportunity to watch Sweden’s world-class playmaker, Isabelle “Bella” Gullden, in action.

Some former stars could help such events as well.  Knowing how much handball legends like Magnus Wislander, Ivano Balic or Jackson Richardson love the game – why not invite them helping to promote the event?

Handball, like all other sports, needs faces.  Faces which are recognized by kids. And the kids have to get a chance to get in touch with them – literally.

The youngsters usually fall in love with handball easily, but all of us need to think about ways to make sure the sport gets to them.  “Tag des Handballs” is a great platform to build from.  Keep it up.