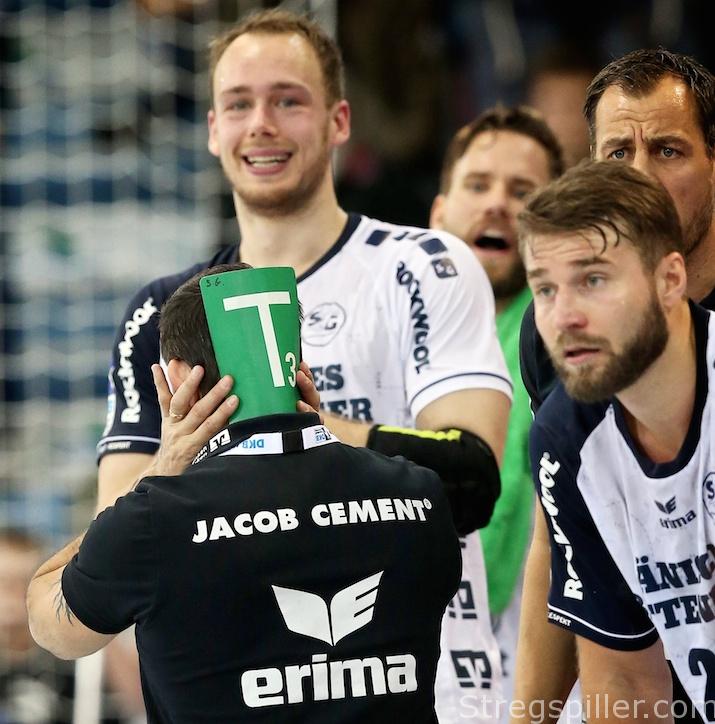 MATCH OF THE WEEK – GROUP A – FC Barcelona had no real trouble taking the expected home win against a decimated Flensburg.

Barcelona were sharing first place in the Group A with Paris Saint-Germain, both with 20 points, but with Barcelona having played one match less.

Flensburg had benefited from Kiel´s 21:24 loss at home to Bjerringbro-Silkeborg holding on to fourth place and 11 points.

As a consequence, the two youngsters, Robin Breitenfeldt (19) and Jannek Klein (17), had both been promised court time by head coach Ljubomir Vranjes.

Barcelona defended their first place successfully in without running into any trouble along the way.

A depleted Flensburg team – coach Ljubomir Vranjes even saved some of his key players for great parts of the match – could never pose a real threat to the home team.

Barcelona’s coach, Xavi Pascual, could make substitutions as he pleased without weakening his team.  However, his players did encounter problems overcoming Flensburg´s goalkeeper Kevin Møller.

But Gonzalo Perez de Vargas, in goal of Barcelona was not far behind the Dane, when it came to saving shots.

From the start, the score was kept low by two brilliant goalkeepers.

Kevin Møller was guarding Flensburg’s goal instead of the usual first-choice keeper Mattias Andersson. And it turned out to be a good choice by head coach Ljubomir Vranjes.

“Der Kevin” as Flensburg fans call the Dane, made a great impression right from the start. Barcelona´s players were struggling to get the ball past Flensburg’s keeper.

At the other end of the court, they had much less success, though. Their only goal in the first nine minutes was the result of a penalty shot, and not even Møller´s saves could keep Barcelona from taking a swift three-goal lead.

As mentioned before, Gonzalo Perez de Vargas was not far behind Møller’s performance.

As the first half progressed, Flensburg slowly established their game and after several three-goal deficits, Hampus Wanne made it 8:8, in the 20th minute.

This was the first time the score was even, but it did not last long. Barcelona got up by two again, before the half time buzzer sounded.

Kevin Møller started the last 30 minutes the same way he had ended the first – by performing miracles between Flensburg´s goal posts.

However, it needed more than a small wonder to bring his team any closer to their opponent.

To the contrary – Flensburg did not score for almost 11 minutes, while Barcelona found the back of the net every now and then.  As a result, the home team increased their half time lead to 18:12.

“This is not okay towards Kevin!” Ljubomir Vranjes scolded in a timeout.

Not until the 41st minute did the visitors score their first goal after the break, when Lasse Svan reduced the gap to 18:13.

The “ice” was broken and in the next few minute, Flensburg added more goals.  Four in a row reduced the distance to two (18:16).

It only forced Barcelona to increase their pace again, and before long the Catalans were up by six goals once again (22:16).  The rest of the match was a formality and in the end, Flensburg were allowed to put some cosmetics on the result.

My award goes to a player from the losing side this time.

Perez de Vargas did a brilliant job for Barcelona but Kevin Møller was even better. Unfortunately, his performance in Flensburg’s goal was not enough to secure the German side at least one point in “Palau Blaugrana”. But Møller was definitely Man of the Match on this Sunday evening, at least in my book.

This can only be Barcelona’s Kempa in the 12th minute, when Raul Entrerrios found Wael Jallouz who caught the ball mid-air, above the six meter area, sending it into the net.

Barcelona remain on top of the group, two points ahead of PSG with only two matches left to play.

Next Sunday, they will be heading to Kiel who will be eager to revenge a humiliating 21:24 home defeat against Bjerringbro-Silkeborg.

Flensburg are still fourth and will be receiving the very same team that scored the sensational victory in Kiel, in their next match at Flens Arena.