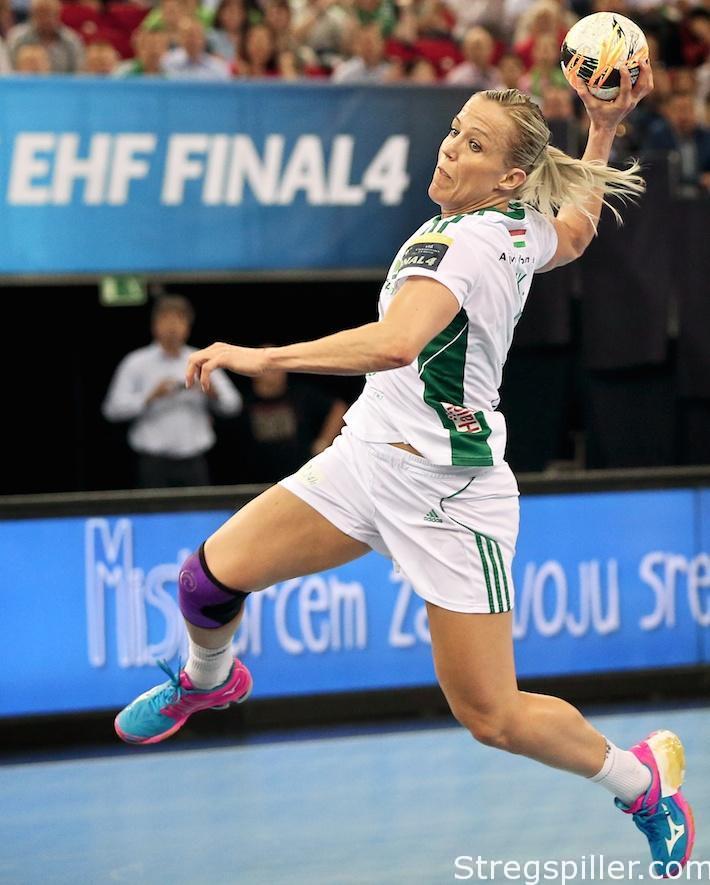 When the going gets tough…

…the tough get going.  It’s this time of the year when Europe’s premier handball clubs meet for their annual showdown in Budapest – the Champions League FINAL4.  Ever since the inaugural tournament in 2014, the reigning champion was unable to defend the title in the following year.  Will it be different this time around as the unlikely winner of the 2015/16 season will do their best to challenge the rule?

Whereas previously obvious favorites and underdogs made the trip to the Hungarian capital, this year the competition appears to be as open as ever, at least at first glance.

Gyor AUDI ETO, Buducnost Podgorica, Vardar Skopje and CSM Bucuresti will clash in the battle for the top trophy in European club handball on May 6 – 7.  The event will showcase some of the best players in the world – Isabelle Gullden, Christina Neagu, Katarina Bulatovic, Andrea Penezic, Camilla Herrem, Nora Mork, Nycke Groot, Anita Goerbicz…the list goes on and on.

On paper, the four teams look evenly matched but is it so?

Let’s go back to the beginning of the season when many of the pundits declared Vardar as the team to beat, closely followed by Gyor, Buducnost, Bucuresti and Rostov-Don.

The Russian powerhouse, Rostov-Don, disappointed first, recording only one victory during the group phase, and dropping out of the competition, eventually.

Likewise, Buducnost had their ups and downs, before regaining their footing with an impressive win on the road against unbeaten Vardar, in the main round.  As Buducnost’s fortune changed for the better, Vardar was heading for their low point of the 2016/17 Champions League season.   On March 5, Metz dismantled Penezic & Co. in humiliating fashion – 42:28 at Les Arenes.

Except for a slip against FC Midtjylland and narrowly avoiding what would have been a first loss at home, against Larvik, Gyor looked solid throughout the rounds.

The only question remaining now: Who is hot and who is not, when it matters most?

Considering the Romanian club’s revolving door policy for the coaching position, the achievement of “Bella” Gullden and & Co. is remarkable.  They are back in Budapest to defend their title – period.

The second leg of their quarter-final against “the other” Hungarian team – FTC Railcargo – provided the champion with a taste of what’s in store, in case of a return to the Champions League final, possibly against Gyor.  Describing of what happened in the match on April 15th as “hostile” may be the understatement of the year – enough said.  Here is the important message – CSM Bucuresti won both games and is the red-hot favorite to defend the title.

For one, the team sports the best playmaker in the world – Sweden’s Isabelle “Bella” Gullden.  After being plagued by some nagging injuries around EURO 2016, she appears to be ready and in top form.  Thirteen goals in the quarter-finals provided a glimpse of what lies ahead.  And in case she doesn’t score herself, expect veteran line-player, Oana Manea to convert some of the no-look passes that will be coming her way – guaranteed.

Add to it, right-wing, Carmen Martin who is playing her best Champions League since the 2010/11 season when she scored 68 goals.  Given her current form, it is not inconceivable that she will surpass her personal high-water mark before transitioning to OGC Nice, next year.

In goal, everything speaks for the experienced duo Jelena Grubisic (last year’s MVP) and Romanian international Paula Ungureanu.  And on the bench, newcomer, Per Johansson has nothing to loose but everything to gain, as Danish coach Helle Thomsen will assume his duties in the upcoming season.

Linnea Torstensson, Gnonsiane Niombla, Aurelia Bradeanu, Majda Mehmedovic and Camille Ayglon are only some of the other reasons, why Bucuresti has an excellent opportunity to lift the trophy next Sunday evening again.

On the outset, Vardar has all it takes to win the Champions League for the first time in the club’s history.  They have participated in all three of the previous editions of the FINAL4 and know the drill – you would think.

But year-in-year-out, the pride of Macedonian handball managed to disappoint their most ardent supporters, despite having many of the very best handball players at their disposal.  Will 2017 be any different with the likes of Camilla Herrem (left-wing) and Alexandra Lacrabere (righ-back) in the line-up?

Long time team leader, Irina Kastratovic was relieved of her duties after the very first game day of the season, following a draw at home, against FTC Railcargo.

Eventually, David Davis moved over from the men’s side, lending his helping hand all the way to the meltdown in Metz.  Now, former world-class player and two-time Champions League winner, Irina Dibirova is at the helm.  Can she achieve what has eluded her predecessors and move her team one step closer to the big prize?

As mentioned before, Vardar has all the individual talent there is.  Three goalkeepers (Leynaud, Pessoa and veteran Inna Suslina) that can raise their level to world-class at any time, two top-notch wingers (Herrem and Radicevic), the leading Champions League goal scorer (Andrea Penezic), and an excellent playmaker (Andrea Lekic).

Unfortunately, the quality of the team is a two edged sword. If everything goes according to plan, and Vardar’s “Two Andrea’s” (Penezic and Lekic) click on all cylinders, victory is all but assured and if not – oh well.

In the three FINAL4’s to date it never happened.  In 2014, Andrea Lekic teamed up with Allison Pineau and could not get it done in game one against a more aggressive Buducnost and a superb Clara Woltering in goal.  One year later, the “Two Andrea’s” combined for eight goals, while the rest of the team supplied only nine more in their losing battle against the same opponent.  And in 2016, Bucuresti held Andrea Penezic to just one goal in their opening match, recording a rather easy victory, in retrospect.

What Vardar needs is an all-around team effort in their opening match this coming Saturday, with Lekic and Penezic leading the way throughout the entire sixty minutes.  Does Vardar anno 2017 have the mental strength, shaking off the ghosts and shadows of the past?  Bucuresti has been there and done it, can Vardar do it as well?  Doubtful until proven otherwise.

While Heidi Loke is a woman of normal size, her departure at Gyor, following her pregnancy left some very big shoes to fill.  Make no mistake, Dutch line player Yvette Broch has stepped up her game significantly but she is not the “go-to” player yet that Loke was.  And she may not have to, considering the overall quality of her teammates.

Nora Mork (right-back) and Zsuzsanna Tomori (left-back) are just two names that can make the difference in any handball team. Certainly, Mork has all it takes to decide a game on her own terms.  Many consider the 26-year old Norwegian as the best right-back in the world and ahead of the FINAL4, she still is in striking distance in the contest for “Top Scorer” of the 2017 Champions League season.

While Bucuresti’s “Bella” Gullden is widely accepted as the best playmaker on planet earth at the moment, Gyor’s Nycke Groot is not trailing too far behind if at all.  Over the course of the 2016 FINAL4, Gullden beat Groot 19:8, when looking at goal scoring only.  Incentive enough for the Dutch international to reverse course – no doubt.

Next to Norwegian goalkeeper, Kari Aalvik Grimsbo, Brazil’s left-back extraordinaire, Eduarda Amorim and a re-energized Anita Goerbicz, Nycke Groot will be one of Gyor’s key player’s in the attempt to repeat the 2014 success.

Buducnost coach, Dragan Adzic will have to dig very deep, to stop the Hungarian champion in their tracks.  As a matter of fact, the contest on the bench may be at least as interesting as the battle on the pitch.  Adzic (Buducnost) vs Martin (Gyor), two of the best coaches in women’s handball.  They have seen it all, no detail will go unnoticed and they will do everything in their power, to push their team over the finish line.

The very first game on Saturday afternoon is quite possibly the highlight of the weekend.  Especially for Christina Neagu and Dragana Cvijic, it will be an emotional affair, as both of them will leave Buducnost after the season.  They will play their hearts out, to push the pride of Montenegrin handball to the top, one more time before the team will continue a very meaningful restructuring effort.

Desire and determination may well make the difference between these two handball powerhouses.  For Buducnost it will be a while before the club will hang with the very best again.  Veteran player, Katarina Bulatovic knows it as well, as she will try to secure a fifth Champions League title.

Which club has the edge?  It’s too close to call.

When the going gets tough, the tough get going – no inspirational quote describes the contest between Buducnost and Gyor better.  Both teams have a long tradition to work hard to meet their challenges; expect them to go at it even harder at the 2017 Champions League FINAL4.

The two Romanian officials, Christina Nastase and Simona Stancu will have their hands full, assuring fair play, while staying on top of it all.

In the end, the match will take a toll on both teams with only a few hours of recovery – yet another reason why Bucuresti has stacked the cards in their favor.