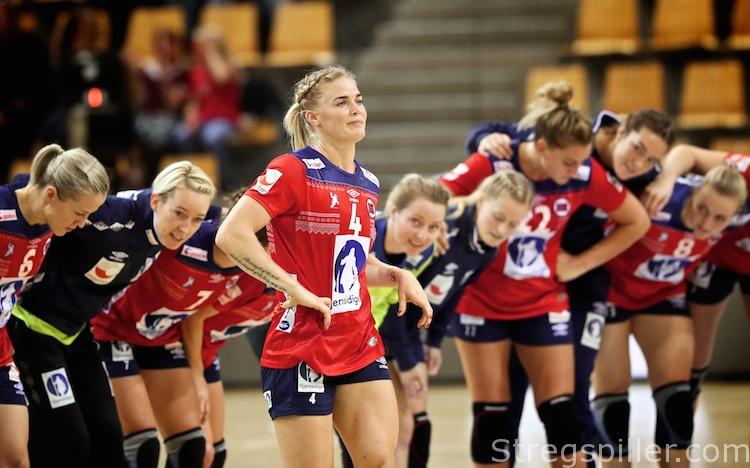 ANALYSIS – On day two of the Women´s Golden League in Denmark people saw an improved French team forcing a draw against a Norwegian squad that appeared more consistent, compared to the match against Poland, 48 hours earlier.

The Polish team seemed to learn even faster what their coach expected, while Denmark did not maintain the momentum of the prior game, in Viborg.

When the two participants of the most recent World Championship final meet, it would understandable, if both coaches preferred winning instead of preparing for the next big event – at least from the outside looking in.

However, neither Olivier Krumbholz (France) nor his Norwegian counterpart, Thorir Hergeirsson, could be accused of aiming for a prestigious victory instead of going through the necessary trials and errors, as France and Norway opened the second day of the Golden League in Aarhus.

In a match of two very different halves both coaches diligently rotated their respective bench, Krumbholz, in particular.

During the first 30 minutes, Hergeirsson´s experiments paid-off nicely, while the French team seemed to confirm the impression left in Viborg against Denmark. Their performance level was far off from the one that made them world champions last December.

The Norwegian team, on the other hand, showed some meaningful improvements compared to their match against Poland, on Thursday.

For one, Norway appeared to be more stable on both ends of the court and in attack, the amount of technical mistakes was reduced considerably.

A major part of the explanation, why Norway were dominating the scoreboard before the break: Katrine Lunde.

The veteran goalkeeper proved once again that she’s still far from being anywhere near the end of her career despite having reached the age of 38. Her many saves contributed big time to Norway taking a six-goal lead shortly before the break.

The change of goalkeepers on both sides had a significant impact on the proceedings of the match.

Laura Glauser (France) replaced Amandine Leynaud and the Metz keeper showed right away that she is on the right track returning to top form after her maternity leave. Suddenly, life became a lot harder for Norway’s shooters.

And on the other end of the court, France´s attack found comfort after Silje Solberg replaced Lunde in the Norwegian goal.

Another reason, why France found their way back into the game was a stellar performance by Tamara Horacek as playmaker. All of a sudden, France’s offense appeared to be better organized. Leading her team´s attack brilliantly, Horacek also managed to be dangerous on her own, scoring seven goals.

That was enough for France to catch up, as Astride N´Gouan equalized (18:18) with 10 and a half minutes left, and a minute later newcomer, Constance Manou, handed France their first lead at 19:18.

Allison Pineau & Co. were ahead at 22:21 in the last minute of the match, but a buzzer beater from Norway´s top scorer, Veronica Kristiansen, ended the affair in a draw.

The way the match turned out, France have more reason to be confident, considering the fact that coach Krumbholz had to do without injured key players like Alexandra Lacrabere, Siraba Dembelé, Larissa Landre and Blandine Dancette.

When they get fit France will look scary once again.

Norway´s Thorir Hergeirsson saw an improved performance compared to the game against Poland – even though the game ended in a 34:27 victory.

However, Hergeirsson must still look for some alternatives to replace Veronica Kristiansen on the left back position – at least occasionally.

On Saturday night, the Györ player was her team’s high scorer with seven goals, but she obviously cannot play 60 minutes in each and every match and Emilie Hegh Arntzen has been struggling, so far in the tournament.

“We are here to learn,” Poland´s coach Leszek Krowicki told stregspiller.com on Friday.

His players did just that and much faster than anticipated. What they showed in front of 3,245 spectators at Ceres Arena was an obvious and much improved effort compared to the match against Norway.

A particular encouragement to Mr. Krowicki must be the fact that Romana Roszak proved to be a great substitute for Kinga Achruk as playmaker. It’s only a matter of time, before one of the ambitious clubs in Europe picks up the 24-year-old center back from Koszalin.

Denmark´s coach, Klavs Bruun Jørgensen had made changes on both wings, where Lærke Nolsøe (left wing) did better then Simone Bøhme (right wing).

On the line, Jørgensen tried all three of his options – Kathrine Heindahl, Sarah Iversen and Stine Bodholt – but neither one of them enjoyed much success, especially on the offensive end.

In the backcourt, he released Stine Jørgensen from her responsibilities as playmaker and instead let her focus on the left back position.

Instead, Lotte Grigel, Mia Rej and Kristina Jørgensen shared duties, trying to run the show in the attack.

Unfortunately, the playmaker trio was reduced to two, when Mia Rej sustained what appeared to be a serious knee injury only three minutes into the second half.

Maybe it was her accident that affected her teammates, but Poland who had already been leading 9:6 in the first half, gained momentum once again.

The Danish half time lead (14:12) was soon changed into a Polish 15:14 advantage, and from that point on the Danes were trailing behind.

A brilliant combination aside, when Stine Bodholt scored the equalizer (18:18), the Danish team appeared to be confused and turned over the ball more often. All in all, a well-playing Polish team landed their first and deserved victory in the tournament.