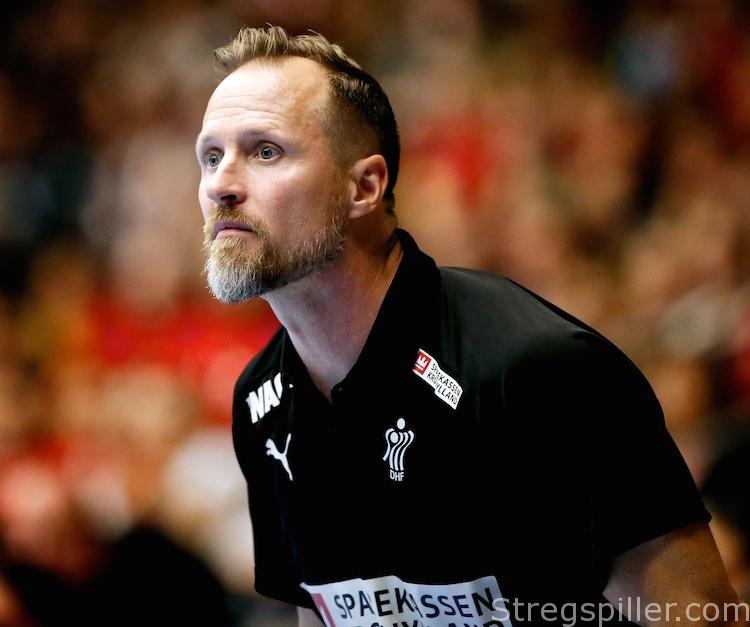 #GoldenLeague – What the coaches said

As the season’s first national team week came to a close in Horsens, the coaches of Norway, Denmark, France and Poland spoke about what they learned from this week, the progress their team made and what’s next on the road to France and the Women’s EHF EURO 2018.

“I’m very satisfied with the girls and the working morale in the group. They worked hard this week developing processes in defence and attack.

“We had more players playing together with the core players, we have to get the younger players in and find solutions with more constellations. We have been working a lot on that and we’ve made progress in defence, we have good goalkeepers and we can do a lot better on counter attacks – there I see a lot of things we can do better.

“In position attack, I see a lot of ups and downs. The ups are very good, the downs are too low. We have to get better with line play and get our shooters in better positions.

“Last year in the World Championship final, we didn’t get more players involved when the core players were tired and we didn’t manage to build confidence in the players who came in. That’s the coach’s responsibility. We didn’t have the keepers we usually have and France were allowed to kill the game by walking in attack, but we cannot control that. We have to build a better attack and see how we can score more in counter attacks, because there are France and more teams who are getting better of getting back in defence.

“I think many players stepped up this week, but it’s a training tournament, so it’s always a little bit different, so we don’t know until the big games come, but they have the potential to do it. We have three strong line players now, very different and difficult to deal with.

“The players have their individual development plans, which is similar to what they do with their clubs, so this is important to build confidence and train well with their clubs. We coaches will do some evaluating, send the players some videos from here. We will also travel and visit the players between now and the Golden League in Oslo and help them if they need.”

“We can mostly be pleased, we had a good week. Our game against France saw a lot of things we had focused on, especially our fast breaks, which is an important thing with our strong defence, but the fast break collapsed in the second half against Norway. Overall, it has improved and it is something that can get even better, so if we can reach that higher level with it then we will be a dangerous team to meet.

“It’s already in the players head, but I think when you’re under pressure, it can collapse a little bit, like against Norway, and you go back to doing what you know. However, that was just one half and I’m comfortable with our situation right now.

“A positive surprise is our second defence, the 5-1, which we hadn’t worked on a lot, and it worked really well against France. The thing is, you can use an offensive defence like this and although it’s not at 100%, many teams are not used to facing it and that gives us an advantage; I also think Fie Woller did a very good job in that position.

“I’m just looking forward to getting closer to the tournament and see which players are performing for their clubs and who is physically fit to play a championship.

“We always feel the expectation from the Danish public and media, but it’s a lot easier to deal with right now because there is a very good harmony in the group. it’s a strong group and people are taking care of each other, which earlier could be a problem when you’re under this much pressure, as you always are in Denmark.

“We have to be humble heading into the tournament, saying we want medals like we used to, won’t work for us and it won’t work for anyone these days. The competition in women’s handball is fierce now, there’s a strong field, so I’m glad that we’ve shown we can compete with and beat the likes of France and Norway.”

“It was a complicated weekend, because we have a lot of players not present, many minor injuries, but we only had one good half – the second half against Norway. The rest of the time we shot and passed badly and we lost 21 balls against Poland.

“We had a big problem with attack, the defence was not wonderful, but correct. The back court lost a lot of balls.

“They are bad results, but perhaps it will be very good for us. We are not in good form, so we must work with these defeats and see why we’re playing so badly.

“Some key players in attack were not here – Grace Zaadi, a very good playmaker, and Alaxandre Lacrabere, who works a lot for the other players. Today we were also missing perhaps the best left wing duo in the world – Dembele and Houette.

“Poland came with a lot of motivation to beat the champions, they played a good tournament and they have a good team. However, maybe some of our players already had their minds on the Champions League and were not fully concentrated.

We have a six-day training camp at the end of October, where we will only train, no games, and it’s a very important period for the team because we now know that we have a long way to go in these two months before the EURO.”

“We actually came here to see where we stand against three top-notch teams, we were the complete outsiders. Three top teams plus Poland, that’s what we thought.

“I simply want to learn from this weekend, to see what we had to improve between now and the EURO and what worked.

“I am very excited and satisfied, my team showed good moments in the loss to Norway, then a brilliant defensive performance against Denmark in front of 3,000 people and a sensational second half today. I am unbelievably proud of my team.”

“We have so little time together. The girls who play abroad joined us two days before the tournament, so it was a big surprise that the team gelled so well and so many things worked smoothly. I’m so proud of the heart and the fight they had within themselves.

“There’s not much we can work on between now and France. We hope that our big star Karolina Kudlacz-Gloc returns, we also have an interesting line player at home injured. The players will have individual tasks to work on as we need to work on individual strength, as a team we play well, but we have to make up for some deficits, such as fitness – because there are many matches to play at the EURO.

“There are also some tactical deficits to work on. We didn’t prepare tactically for France, we played our own game, while at the EURO we will need to prepare for each team individually.”