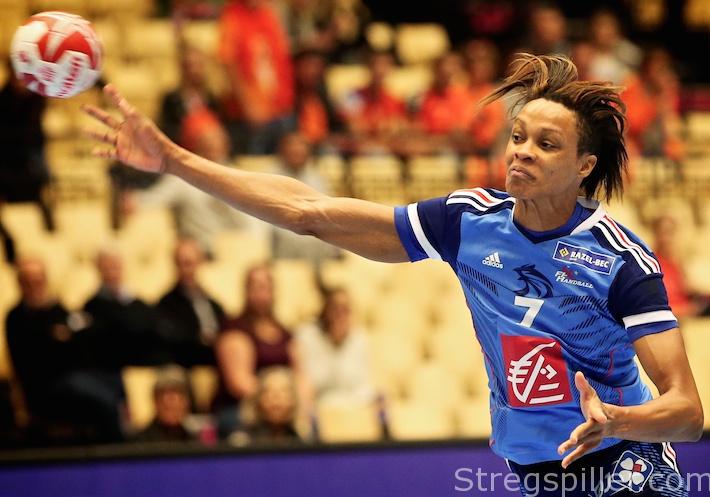 Baia Mare began its Champions League main round campaign with zero points – enough said.  The team of coach Aurelian Rosca would have to win this game to keep a theoretical chance for reaching the Champions League quarterfinals alive.  Fleury Loiret arrived in Romania following a belated main round win against Thueringer HC earlier in the week.  The game had to be re-scheduled in the aftermath of the Paris terror attacks in late 2015.

There are not many players in the EHF Champions League who are so confident in their ability to score like Allison Pineau.  In the game against her countrywomen she single-handedly kept Baia Mare’s quarterfinal dream alive.  Without Pineau’s timely goals in the opening phase of the match, Baia Mare’s hopes for a prolonged Champions League season would have ended early.  From the get go, Baia Mare was struggling with Fleury’s powerful back-court duo, Alexandrina Barbosa and Gnonsiane Niombla.  Both players created havoc and were scoring at will while Baia Mare’s central defenders had their hands full controlling Fleury’s line-player, Laura Kamdop.  By the 19th minute Fleury had built a comfortable 5-goal lead (12:7). Coach Rosca’s decision to re-place right-winger Adriana Nechita with Alexandra do Nascimento not only provided relief for Pineau but yielded some welcome dividends in the form of three consecutive goals, cutting Baia Mare’s deficit to two before the half-time buzzer.

In contrast to the first 30-minutes of the game, Allison Pineau did not have to carry the team all by herself anymore.  Melinda Geiger and do Nascimento continued to chip away on Fleury’s lead and by the 40th minute, Baia Mare was ahead (20:19) for the second time after Pineau’s early score.  On the other end of the court, coach Rosca’s squad was now struggling with Estelle Nze Minko who had joined in Niombla’s and Barbosa’s long range barrage.  Nine minutes before the end, Minko had equalized the match – for the last time.  Allison Pineau, Lois Abbingh (the Dutch, 2015 World Cup silver medal winner was perfect from the 7-meter line scoring 4/4) and Katarina Jezic arranged for a three-goal lead that would last until the dramatic end that saw veteran goalkeeper Paula Ungureanu stop a close range shot from Alexandrina Barbosa, before fouling out and Eli Chavez miss another wide-open opportunity.

Good, better, Pineau – once again. Following a turbulent 2014/15 season, Allison Pineau is possibly playing her best handball ever.  Much has been said about her speed and leaping ability, today it was all on display scoring 10 goals while carrying her teammates through a very difficult fist half.  Pineau in current form makes her one of, if not the prime candidate for the 2016 World’s Best Player award.

Highlights of the Match

It’s worthwhile to watch the re-wind of the game on EHF TV – certainly a “must” for any handball afficionado that enjoys long-range shooting. Niombla, Barbosa, Nze Minko, Pineau – it does not get much better.

After the hard fought victory against Fleury, Baia Mare is back in the competition. If Allison Pineau & Co can deliver a successful encore performance when the two teams meet in Orleans again, who knows where this year’s Champions League journey stops.  Fleury in turn will fight uphill battles against Rostov and Larvik before the (decisive (?)) re-match against Baia Mare on home soil.