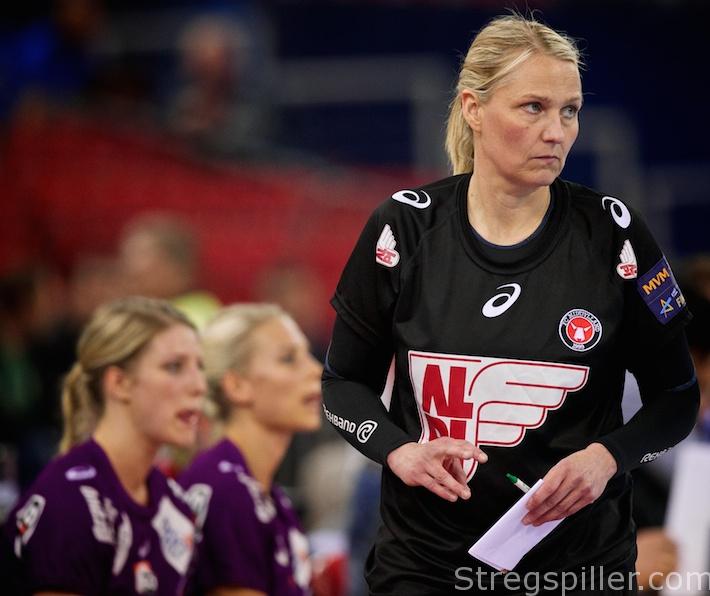 It is great to be part of the action again

In this exclusive interview with stregspiller.com, Helle Thomsen talks openly about her short-term contract as Dutch national coach, her feelings about being fired at FC Midtjylland and her views on the upcoming European championship as well as the Women´s Champions League.  The one thing she is a bit reluctant to disclose are her plans for the future.

It came as a shock to Handball Denmark – and to great parts of the Handball World for that matter – when Helle Thomen was let go as head coach of FC Midtjylland only a few weeks before the start of the new season.

Disagreement between Thomsen and management was stated as the official reason for her job discontinuation, a development no one – aside from Midtjylland’s management – saw coming.

However, the 45-year-old Dane did not stay unemployed for long.  Shortly after the bad news in Denmark, she had her debut as national coach of the Netherlands, after one of the fastest recruitment processes in the history of international top handball.

Only a few days after the news about Henk Groener retiring from the job, Thomsen was introduced as his successor – and she confirms that things went fast.

“I heard from the Dutch federation Wednesday or Thursday that week.

“Friday morning at 11 a.m. I had my first meeting with them, and at 1 p.m. we had reached an agreement!” explains Helle Thomsen who led her new team to a win in the test tournament on home ground. The opponents included Romania, Serbia and the Netherlands´ own B team.

“I do not read too much into the results.

“What was more important to me was having the opportunity to see a lot of players in action.

“I saw their academy and the many talented young players, I saw the junior national team, and as our B team was also taking part in the tournament, I got a chance to see a lot of senior players as well.

“Furthermore, I gave court time to some of the players who usually do not play so much, because players like Nycke Groot and Estavana Polman play all the time.

“I also took the opportunity of testing some of the players in roles they do not usually have.

For instance, a player like Kelly Dulfer usually only plays in defense, but in the test matches, she played an hour and a half in the attack,” says Helle Thomsen who is aware that the expectations in the Netherlands are high after the silver medal at the 2015 World Championship and a fourth place in the Olympics less than two months ago.

“Of course, expectations are high, and that’s the way it should be.

“However, you have to bear in mind, that in a championship like the European championship this December, there may be 14 squads who can win the title, and it may not necessarily be the four best teams who end up playing for medals.

“You only have to look at the recent Rio Olympics.

“Some teams had a great Olympic tournament, and some did not.

“That is the way things go – up and down – because the differences are so small these days.

“That suits me just as well as it does the Dutch federation.

“This way, they get the chance to think about their strategy for the future, and I get the opportunity to figure out what I really want.

“It was the federation that wanted it this way, but as I said, it’s fine with me.

“So far, things look really good. I have been received very well by the players as well as by the federation,” she says.

I am not bitter

She admits that her new job in the Netherlands has made it easier for her to talk about her dismissal at FC Midtjylland.

“Of course, the fact that I am back and part of the action again has made things easier compared to no coaching job at all.

“However, it is difficult to put it completely behind me.

“I was sad having to leave, because I think we have a great training environment, and that we are creating something big.

“Furthermore, I miss those fantastic women, I was coaching there, and I miss to see them playing,” says Helle Thomsen who did not miss the special recognition of her former players after winning the Super Cup against Team Esbjerg back in September, though.

At the end of the game, all Midtjylland players appeared in white t-shirts reading “Thank you for everything, Helle!”

“I do like them just as much, even if they had not done that.   But of course, such action made me happy!” says Helle Thomsen who may be sad having to leave Midtjylland, but who denies any feeling of bitterness.

“No, I am not bitter.  The risk of losing your job is part of the game, and you have to be aware of this risk all the time – but, of course, it is tough when it happens to yourself.

“However, I am happy about the support I have felt from the players, all the way.

Looking forward to the European championship

Her biggest – and maybe only – task with the Dutch national team will be the European championship in Sweden, where she has been national coach no less than twice in her career already.  For the first time, as part of a coaching duo with Thomas Sivertsson and later on, alone, as a successful but temporary coach for the Olympic qualifiers back in spring.

In the preliminary group, her team will be facing France, Germany and Poland.

“I see France as favorites to win the group.

“They impressed me at the Olympics, and they also did well at the test tournament in Denmark.

“I see Germany and ourselves as the two teams to fight for second place, with Poland being the dark horse.

“However, as I said, it is really hard to predict the outcome of such a close championship.

“This also holds for our main round group, when we are possibly meeting teams such as Spain, Sweden, Serbia and Slovenia.

“Any of these squads can beat any opponent on a good day,” sounds her analysis.

Gyor to win the Champions League

Even though Helle has turned national coach once again – at least for the next three months – she is still following club handball closely, and she is obviously going to keep a particularly close eye on the 2016/17 Champions League.

“I see Gyor as the top favorite to win the tournament this season,” she says, adding her name to the long list of experts who see the Hungarian powerhouse as the coming Champions League winner.

“They have Zsuzsanna Tomori back from injury, and they have been reinforced by Nora Mørk.

“Furthermore, they have had another year to make their team click even better, and players like Nycke Groot and Yvette Broch have been even better integrated.

“Finally, they will be on home ground in the FINAL4, and I expect this circumstance to play a big part too,” says Helle Thomsen who experienced the FINAL4 at Papp Lásxlo Arena, in Budapest while coaching FC Midtjylland in 2014, the inaugural year of the Women´s FINAL4.

“I am not saying that it is not going to be close again this season. It will be – no doubt.

“Rostov-Don have been reinforced considerably, and Vardar are probably also more powerful than last year. But I do see Gyor ahead of all the others,” she says.

Not sure about the future

While she has been answering all the questions so far, she hesitates a bit when asked about her plans for the future – looking beyond the European championship.

“I am not even sure if I will accept, if the Dutch federation offers me an extension of my contract at this time.

“I feel that I still need time to find out what I want in my future.

“Actually, I was planning on taking some time off to think about my future wishes.

“After all, you cannot expect many offers for coaching jobs right away, when you were fired at the beginning of September – at least not for the next 10 months.  So, I decided to make the best of it and allow myself time to think.

“Then, this job offering came up, and it was too good to turn down.

“I still feel that I need time to think about my future, though. Do I want to work in Denmark – or abroad? What should it be? There is a lot to think about,” she finds.

Could she see herself as national coach in Denmark?

“Of course, it would be a dream come true if the opportunity should ever present itself.

“I think it will always be a dream to be national coach in your own country, but for the moment, I hope that Klav and Søren (Bruun Jørgensen and Herskind) will make things work, and that a new coach will not be needed any time soon.

“However, as I said, it would be a dream coming true, if the chance ever comes.

“For now, it is just great to be part of the action again!”